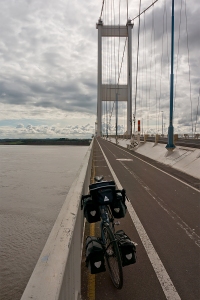 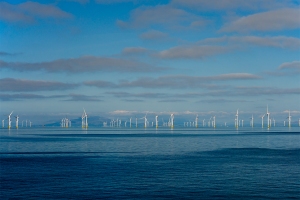 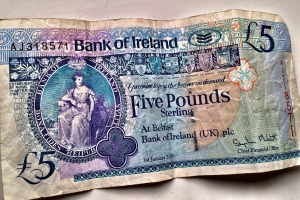 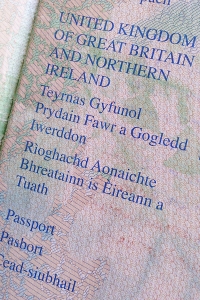 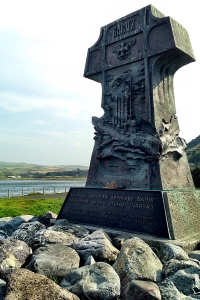 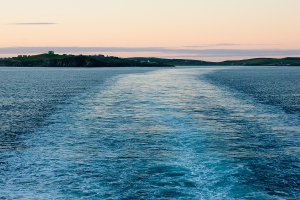 NB: I’ve been trying to post this for 36 hours now; please pretend that I’m not at Aberdeen Railway Station waiting for a train south 😉

There should probably have been an update between Inverness and here, but it just didn’t quite work out (my new habit of falling asleep while typing reared its ugly head again, compounded by the severe lack of decent internet access at the top of the country – sorry!).

There have been a lot of miles and a lot of islands since the last post.

And, in a carefully-planned attempt to undermine any sense of suspense, and just in case you didn’t see the mini-post earlier, I guess it’s worth starting with the fact that the road north finally ran out on Monday at around eleven-fifteen: 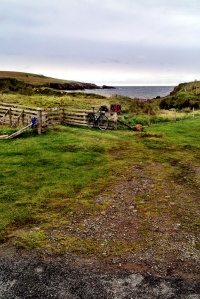 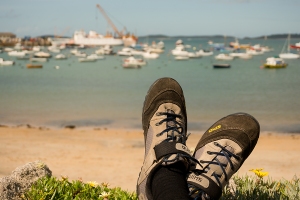 The target of the last few weeks.  Since the sunny Isles of Scilly (above) at the southern end of the UK.  Four countries.  Over a thousand miles.  Climbing more than the height of Mount Everest.  Lugging 25 kgs of bags.  A proper test of my shoulder and back (which they’ve passed with flying colours – and a bit of ibuprofen).  Journey’s end.  Phew!

Except for another sixty-odd miles back down to the ferry south.  And, given how well my body has held up, another eight or nine thousand miles to finish the round-the-world trip in the fairly near future.

But that’s all to come.  Where have I been for the last few days? 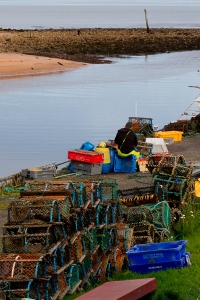 After leaving Inverness, the road north basically hugs the east coast all the way to the top end of Great Britain.  The landscape changes quite slowly (essentially, it rolls, sometimes by the shore, sometimes on clifftops), with lots of dives into little harbours, like the one above at Brora.

But one thing is immediately obvious to the road user.  Through the Highlands, all the signs are bilingual, with English and Scottish Gaelic (British language number – what? – six ish?) sharing space.  From Inverness northwards, on the coast at least, they’re not.

Why not?  Because heading north, you’re heading into Viking country.  There are many parts of the UK with Viking place names (they got around a bit, the Vikings), and they’ve tended to stay more-or-less the same, so there’s no real need for bilingual signposts.  That said, there’s nowhere I’ve been before in this country where the Nordic influence is as strong as in Orkney and Shetland. 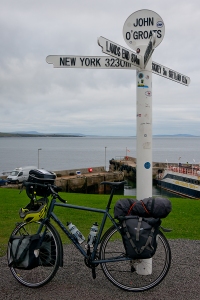 After John O’Groats, which is the northern end of the Lands End to John O’Groats ‘end to end’ (and which, as a pedant, I should point out – probably for the tenth time – is neither the northernmost point of Scotland nor Great Britain), I hit another ferry, this one to Orkney.  You can see Orkney pretty clearly from John O’Groats, so it would be hard to be happy with finishing there, in my little world, at least. 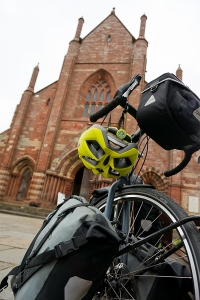 And Orkney’s where you really start to feel the Scandinavian influence.  Kirkwall, the capital of Orkney, is home to St Magnus’ Cathedral (above, behind the Beastlet).  You don’t get much more Nordic than Magnus as a name.  And the accents are fantastic; a beautiful mixture of soft Scottish pronunciation with lilting Scandinavian intonation.  Like a cross between Highland Scots and Swedish accents.  I’ve just changed ‘accent’ to ‘accents’ in the last sentence, as a couple of conversations in the bar in Shetland made it clear that locals up here can spot the difference in speech between one island and the next, let alone between Orkney and Shetland. 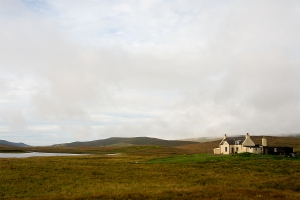 Anyway, once in Orkney and Shetland, you really are in the Viking sphere of influence.  Both have flags with off-centre crosses (like Norway, Sweden, and so on).  And there’s a lot of shared history.  Shetland (Hjaltland) was actually part of Norway for a long time before becoming part of Scotland.

Heading north into Shetland, you can appreciate how beautiful, and how isolated it is (the picture above gives you a good idea).  And Shetland itself is an archipelago, within the larger one of the British Isles, so there are more ferries between islands with fantastic names; from slightly boring Mainland, through Yell (or YELL?) to Unst. 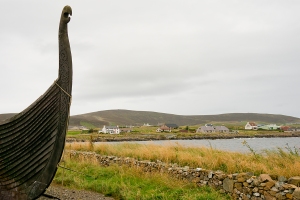 Unst is definitely Norse; I stayed in Baltasound, and headed to the top of the country through Haroldswick (above), which sounds as Scandinavian as you could want.  It’s just as beautiful and harsh as the rest of Shetland, and the working farms and inhabited houses are regularly interspersed with reminders of how tough life up here was in the past: 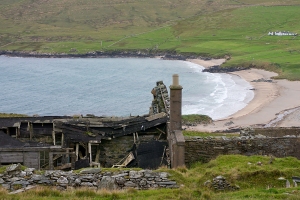 The end of the road nearly came as a nasty shock.  Just a couple of hundred yards from the end, I discovered just how slippery sheep droppings can be.  That would have been close to the ultimate catastrophe; being taken out by dense woolly creatures within touching distance of my goal.

Still, one heart-in-mouth front-wheel skid later, I was there.  Job done after a little over three weeks and a little over a thousand miles.

I’m rushing for a ferry south at the moment, so will provide a more measured summary of the trip (maybe even with a working map!) in a couple of days, once I’m back in southern England.  But it’s been a good little ride, and I’m sorry it’s over.