It’s after four on Sunday afternoon, but it feels much later with the glowering black clouds cutting the light down.  Driving rain lashes Newbury racecourse, as it has, intermittently, for most of the day.  And it’s chilly, even for the fickle English summer.

The Wiggle Magnificat Sportive is drawing to a close.  Think of it as a mass-participation marathon on wheels, without an elite race in front.  Hundreds of damp, tired cyclists have completed their choice of 44, 85 or 128 mile rides.  They shelter in the cafe and bar, easing their pain with alcohol or warming up with steaming cups of tea.

Maybe a few of the nicer ones among them are sparing a thought for the stragglers still out on the course.

A couple of miles away, two of those stragglers are finally rolling down the last hill towards the finishing line, and carefully negotiating the slippery white paint of the mini-roundabout on the last corner.  One of them is trying, unsuccessfully, to prevent his teeth from chattering as the cold wind cuts through his soaked clothes.  This is me.  The other can’t quite believe that his legs, which stopped working properly over an hour ago, are actually getting him to the finish line.  This is my friend Luke.

Few would argue that this is conventional, Type 1, instant gratification fun.  But we finished.  It wasn’t fast, and it wasn’t pretty in places.  But that really isn’t the point.  We’ve been there, and (literally) got the T-shirts:

And, at least for me, as a protein-rich dinner and a couple of pints of cider mingled happily in my stomach a few hours later, it retrospectively became so much fun that I signed up to do another one in a couple of weeks.

Luke may take a bit longer to convince.  But I’m sure that, eventually (when he can sit down again without a soft cushion), he’ll agree that it was fun too.

Given our various physical issues and relative lack of preparation (basically, find a sportive training guide online, tear it into tiny pieces, and replace it with a few sporadic short rides, beer, and darts marathons), I reckon we did OK.

In a straight line, the 85 miles would have taken us from Newbury (pretty much in the middle of southern England) to Newport in Wales, or Birmingham in the midlands.  And the climbing was a little more than going from sea level to the summit of Ben Nevis, the highest mountain in the UK.

For me, it was really about continuing my rehab after the accident.  I was pretty sure I’d be fine with the mileage after touring halfway round the world in the last year (the same Sunday in 2014 saw me rolling off from Greenwich to start my still-unfinished circumnavigation).

But, with my shoulder, back and neck still in pieces, it was a test to see if my body could deal with a whole day on the bike.  It can, which makes me very happy.  I’d struggle to do it for several days in a row, though, so I’ve still got some recovering to do before I get back to touring in a few weeks. 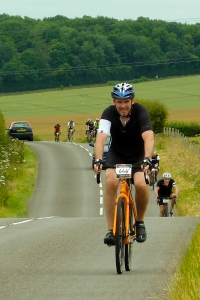 For Luke (above, climbing one of the countless small hills in a rare non-rainy moment), it was a different sort of challenge.  He only bought his bike a few weeks ago, and his training’s been limited to laps of Richmond Park in London.  Which means that Sunday was his first ever ride over 40 miles, and the first time he’d gone anywhere close to that level of climbing.  Forcing his exhausted legs over the last few hills and miles was a proper result for him.

So, a cycling first for both of us; sportive number one completed.  An achievement, if not quite on the level of what Team Sky just did to the rest of the Tour de France this afternoon (Tuesday).

Was it worth it?  I’d say ‘definitely’.  But then, I’ve made hard riding a bit of a habit over the last year.  Luke might say ‘maybe’.  Or something unprintable.  The countryside was lovely, if damp.  The riding was fairly tough, but not outrageous.  The organisation was excellent.  The weather was shocking, and the course designer was a bit of a sadist, throwing stacks of stinging little climbs into the last few kilometres.  But in the end it was good, if definitely Type 2, fun.

And it hasn’t put Luke off cycling.  He’s talking about putting some bags on his bike and joining me for a couple of days on my UK tour in a few weeks.

Assuming he can bear to sit on a bike again by then, of course…