Well, the plan worked out.

I don’t have time for a full length post today, so am just going to bung up some pictures, really. Too many miles have been ridden, and too many still need doing. I’ll hopefully put up a fuller update in a couple more days. 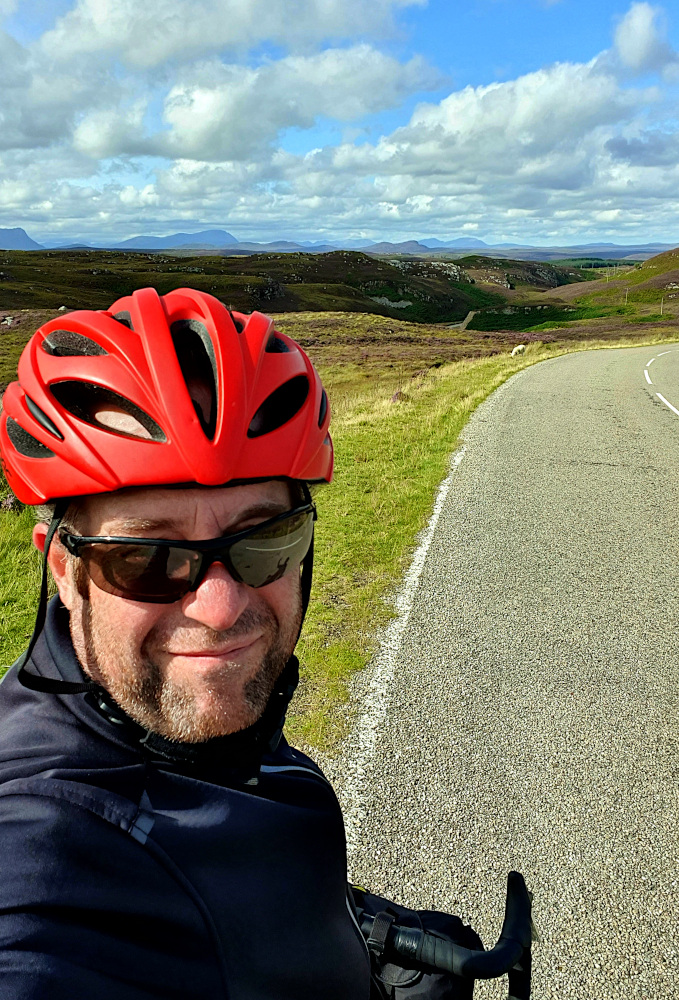 But the plan worked. The wind has been at my back since Thurso. And actually turned around halfway through to remain there. All suspiciously easy. Got a bit wet on the first day, into Durness, but apart from that, have just about managed to stay dry, too, which is always a bonus!

From close to the north-east corner of Scotland, I’ve pedalled around 140 miles (230 km) in two riding days. First to the west, then to the south. Long-ish days (for me, loaded up) in themselves, but each with over 1400 vertical metres of climbing too.

The scenery has improved from decent to stunning as I’ve rolled along and onto the West Coast, which has enabled me to occasionally ignore the aching quads and cramping hamstrings.

There’s still a breeze out of the north, which makes it chilly, but also means that I’ll keep pushing on for now with the wind more-or-less at my back.

And hopefully, a fuller update will appear in a couple of days.  Once a breather can be had.

As you get towards the end of the road north, things start to disappear.

Pulling out of Elgin on Thursday morning, I was heading to Inverness, the most northern city. No more cities after that.

I was also still enjoying Scotland’s cycle infrastructure, including the nice old railway bridge near Forres (above). But, as I dropped into Inverness on yet another well-signposted, segregated cycleway, I knew I wouldn’t be seeing much more for a while.

North of Inverness, there’s a lower volume of everything. Fewer roads (just the A9, basically), fewer people, fewer towns and shops. And of course, fewer nice bike paths.

But there were more of some things as I pushed north. Oil rigs and threatening clouds. And finally, quite a lot of long-distance cyclists. 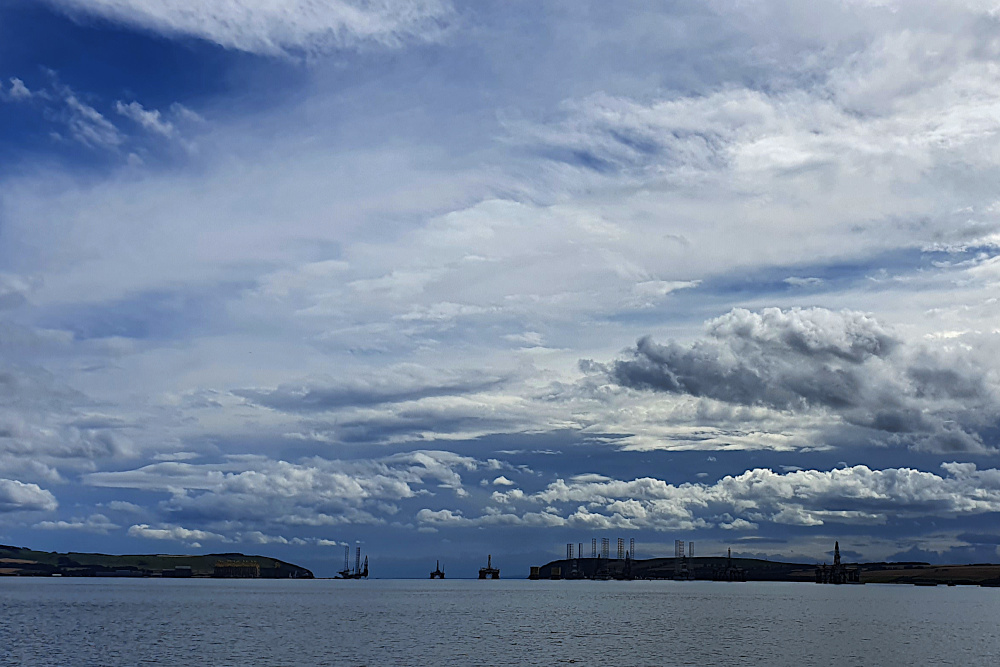 The rigs were parked up in the Cromarty Firth off Invergordon, where many are repaired or decommissioned. The clouds have been threatening me all the way up to the far north, and taking up an undue amount of my mental processing power.

Given the lack of route options, the weather forecast becomes more important. Do you go or stay? Try to outrun the next shower, or wait for it to cross the road ahead of you? Is that rain at lunchtime just a shower, or are you going to be stuck for the rest of the day? Or do you just ignore the whole thing, pull on the waterproofs, and plug on regardless (getting soaked in sweat instead)?

Where the clouds clear for a while, the skies get bigger as the road goes north. The landscape at the very north end of mainland Scotland is not as imposing as you might think, leaving plenty of room for the sky and the sea to fill the space.

By the time you start the final gentle drop towards John o’Groats (below), you really do feel like you’re getting to the end of something, despite the fact that you’re not, really. You can see the island of Stroma fairly close by, and Orkney in the background, after all, so it’s not really the end of the road at all.

If you’ve stuck with this blog for a while, you’ll know that I don’t really understand why John o’Groats is any sort of big deal. It’s not the northermost point in the UK, Great Britain or Scotland. And it’s not even really a town; more a collection of tourist-related services massed around a signpost.

But it’s been famous for ages as one end of the Lands End to John o’Groats (‘LEJoG’) route up Great Britain. And, more recently, it’s been included on Northern Scotland’s North Coast 500 route as well. So, for a signpost in the middle of nowhere, it does get a lot of visitors.

I suppose, technically, arriving at John o’Groats on Saturday meant that I’d completed my own LEJoG ride in 2020, albeit by an extremely convoluted route. Perusing the records, it looks like I took 33 days, compared to most riders taking 8 or 9 in a stright line. But then, most of them don’t go via Kent, or ride 40kg rigs. To be honest, I was happier to have hit 3000 km without any punctures, mechanical issues or physical breakdowns. Had the South America trip happened, I’d be just a few days south of Santiago in Chile by now.

There was a fairly brisk headwind yesterday, as I headed west from John o’Groats. Given the headwind, and a few tough days ahead, I’d already decided to just trundle across to Thurso. A short ride, but it did give me the chance to have a look at Dunnet Bay (below), and the actual northernmost point of Great Britain at Dunnet Head, across the water.

The current headache is again the weather. There’s a big storm spinning in from the Atlantic, which is a reminder that things will get autumnal soon. It’s also apparently a massive lump of wind and rain, which should make conditions horrendous across the whole country tomorrow (Tuesday). Except for the very, very northern edge, apparently.

So, I’m resting up in Thurso on a perfectly ridable day today, in the hope that the weather forecast is right, and I can get pushed across Scotland by the edge of the big storm tomorrow, but without getting (too) wet.

It’ll be astonishing if that works out…