This was not exactly a massive shock.  What was quite surprising was that a day’s bike ride in Georgia can take you from snow-capped mountains to palm-lined seaside resorts so easily.  Though it might, I suppose, be trickier in the other direction.

I made the most of what the weather forecast said was going to be the last day of tailwinds (on Sunday), and decided to get as close to Batumi as I could.  Before the wind decided to punish me again.  I ended up only around 30 miles short, and was rewarded by my first view of the non-black Black Sea (above).

Looks nice, doesn’t it?  Those snow-capped mountains in the background, dropping into the sea in the spring sunshine.

The short ride into Batumi on Monday was beautiful, marred only by the knowledge that it would be my last night in the country.  The last chance to stuff my face with delicious, cheap Georgian food.  And the last night for a while that I’d have a language in common with the locals.  I’m going to miss Georgia, I think. 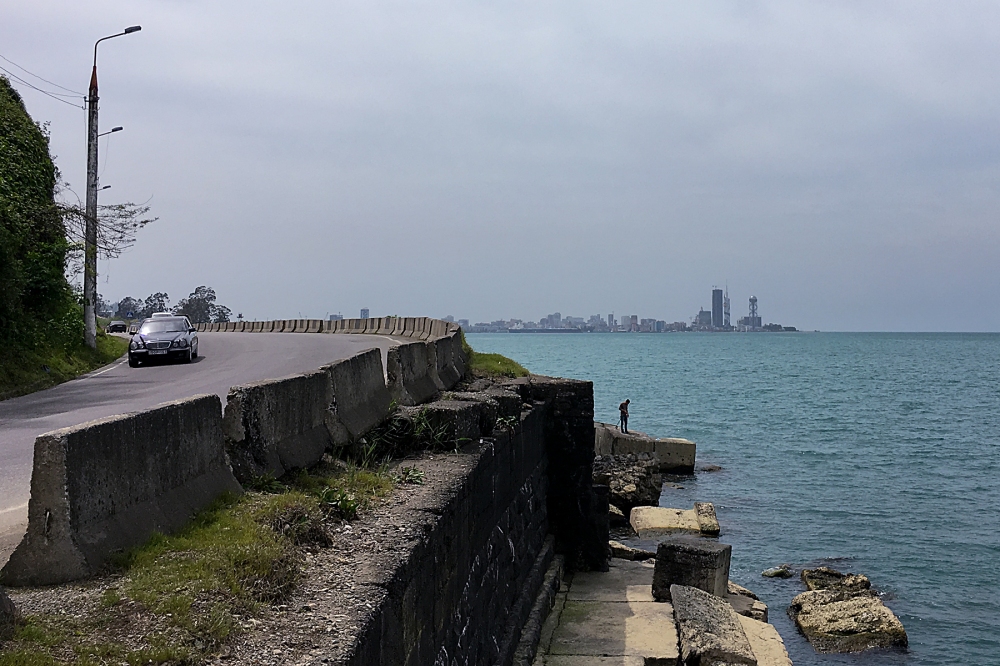 Batumi is one of Georgia’s major ports, and also a tourist resort, as well as being the last major town before the Turkish border.  The locals also seem to have developed a taste for architecture, with an impressive array of oddly-shaped towers springing up on the skyline as I approached.

The one aspect of Georgia which I won’t miss is the driving.  A bit like Thailand, they have good roads, but drivers whose skills have not caught up yet.  The massive amount of traffic cops on the roads (mostly in equally massive American police cars, for some reason) is hopefully an indicator that they’re working on it.  I had a sudden thought that I hadn’t seen a bicycle lane for thousands of miles.

A few kilometres north of the centre of Batumi, a cycle track magically appeared.  It took me all the way into town.  And then it multiplied.  The whole city is covered in bike lanes.  It was almost shocking. 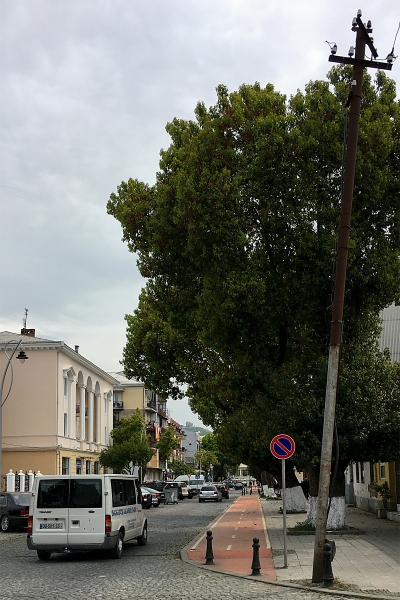 I had a wander around town in the afternoon, and marvelled at bike lanes zigzagging between cafes and their outside seating areas, between supermarkets and their fruit displays, and dead-ending at busy junctions.  The one above is one of the more sensible ones.  Which just stops at every road it crosses.

There doesn’t seem to be any great planning involved.  And the locals appear genuinely astonished when a bike actually uses a bike lane (which is usually for drinking coffee, walking the dog, or shopping).  But the effort is commendable.  And the major bike lanes along the seafront and the main roads are light years ahead of anything I’ve seen for months.  So, hats off to cycling city Batumi!

Still, after my stroll, some seaside ice-cream, and a proper feed, it was time for bed.  And a few hours later, to cover the last ten miles of the Former Soviet section of the trip.  It’s been a great few weeks, all the way from Tashkent.  From the desert to the mountains to the seaside.  More people should come here.

The road to the border (and after the border, for that matter) hugs the shoreline, with the impressive cliffs, and more impressive snowy mountains, dropping straight to the water.  The picture below is from the last headland in Georgia (the border is in the next bay).  So the land ahead is Turkey.  It seems a little strange that the landscape it reminds me most of is New Zealand, which is a long, long way from here. 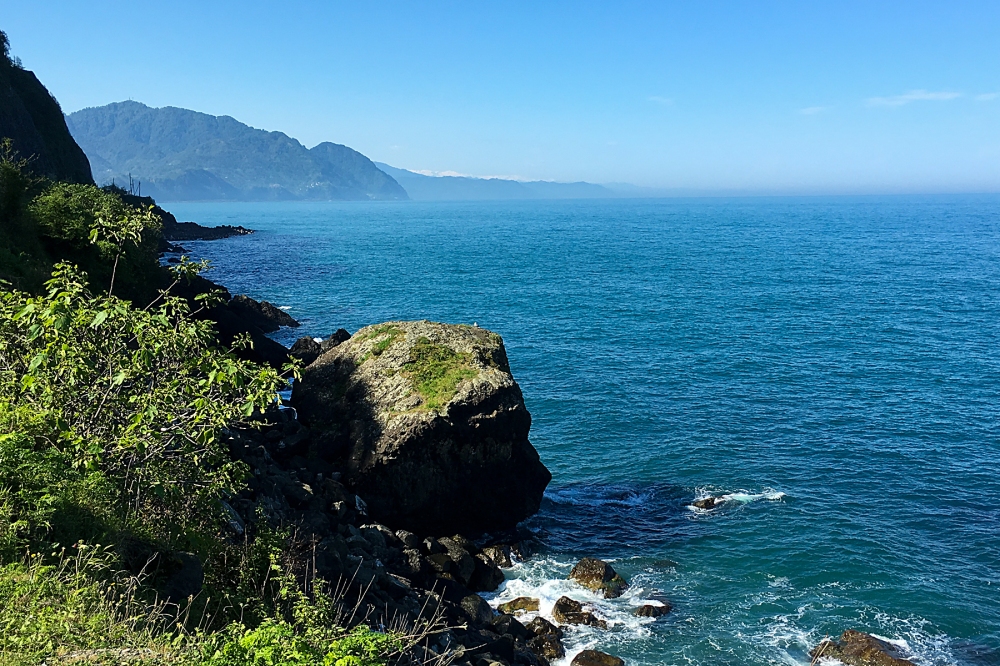 Another five minute border crossing, and I was in country number 23, heading south-west along the Black Sea coast.  A coast which takes you straight to Europe.

It’s starting to feel perilously close to the end of the trip now.  Turkey’s quite familiar to many Europeans as a package holiday destination, and the local time has ticked back to within just two hours of the UK.  It begins to feel like home is just around the corner.  Despite the beautiful scenery, the sunshine, and the wide, smooth road, I was feeling a little melancholy as I trundled along.

Then I heard a muezzin calling from a minaret, and I remembered that there’s still actually a long way to go.  Turkey’s going to take a few weeks, as it’s another big country, and then there’s the huge variety of relatively tiny European countries to look forward to before home finally beckons.  No need to worry about the end just yet. 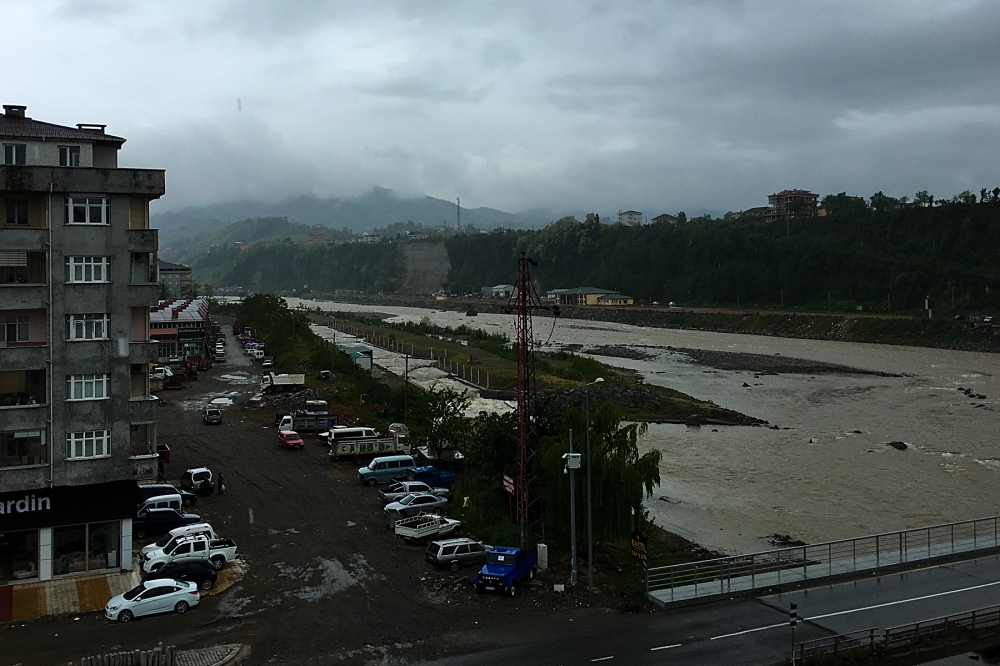 I haven’t formed much of an impression of Turkey so far.  Yesterday was just the pleasant ride from the border, and I’ve cunningly spent today having a rest while the rain hammers down outside (above).  My weather anticipation is definitely getting better.

But the people have been friendly so far, even though I’m back to having significant language barriers.  Things are more expensive than anywhere I’ve been since Vietnam.  And it’s still cold when it rains, so it’s definitely not summer here yet.

I’ll find out more over the next little while.  I’m heading straight along the coast to start with, but I’m still not sure of my exact route after the first week or so.  There are three options, all of which are more-or-less the same length (though with massively different levels of climbing).

I’ll make up my mind on the way.  The Black Sea might not be black, but it is quite big.