I wasn’t sure that I’d get very far after I left Samsun yesterday morning (Tuesday).

First, there were some horrendous weather forecasts flying around.  Most of which suggested that I’d be pinned down by thunderstorms and wave after wave of heavy rain until Saturday.

Second, it was time to hit the mountains again.  This was sure to slow me down, and so leave me trapped in the middle of nowhere as the lightning flashed and a month’s worth of rain fell in twenty minutes.

All in all, it looked a bit nasty as I pulled on my brand new cycling shorts*.  The cloud was already down on the tops of the hills around the city, and I almost decided just to go back to bed for a week, and wait for the rain to get to me. 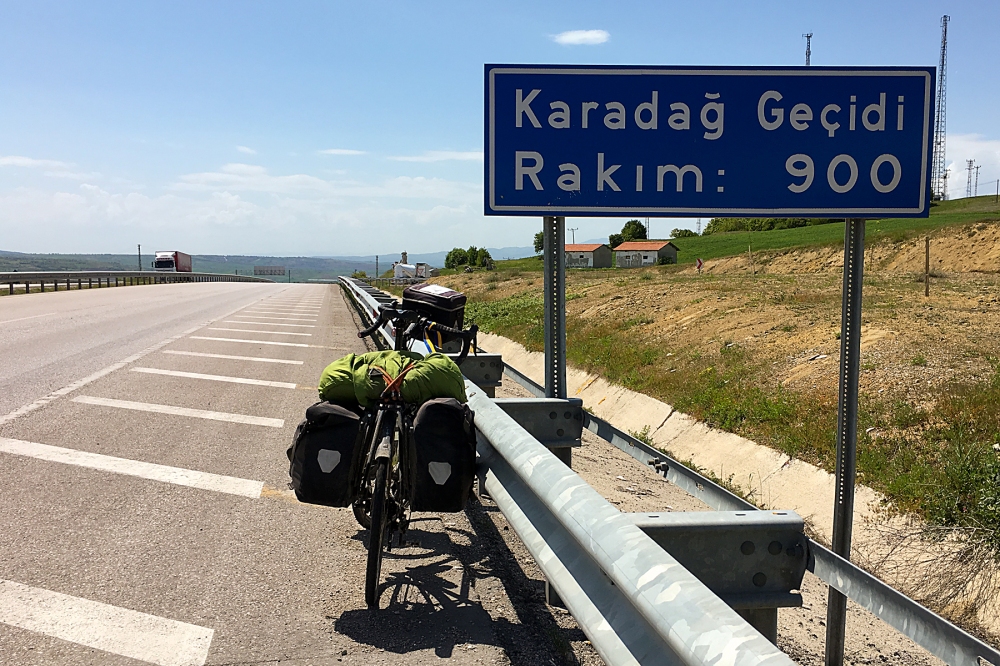 So far, it’s been a decent decision not to.

The clouds began to clear as soon as I turned inland, and the remnants of the breeze which had pushed me along the coast were funnelled by the hills into a little tailwind.  The road has been beautifully engineered throughout, too.  But it was still quite a surprise to start at sea level, and to hit a 900-metre (close to 3000 ft) pass before lunchtime.  At an average of 13 mph.  And in the sunshine, too.

I wasn’t fooled, though.  This was not allowed to be a brilliant day.  I knew the mass of rain that the TV news was showing couldn’t just disappear.  It was just a matter of time.  I watched the skies, suspiciously.

Still, as I rolled into Havsa yesterday afternoon, I was still bone dry.  There were a handful of heavy storms about, but they were all pretty small and none came too close.  I figured I’d got lucky, and prepared to be rained in the next morning. 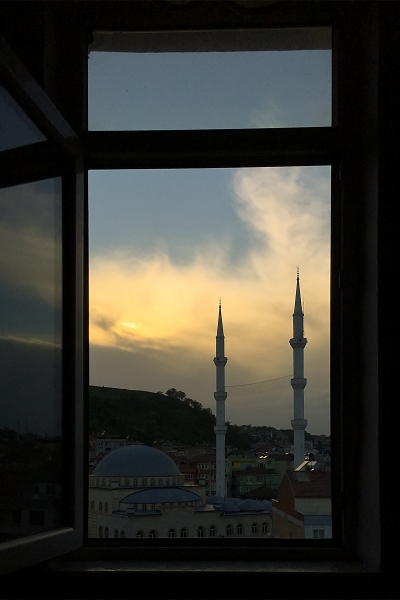 After watching the sun go down behind the mosque, I considered composing a few sentences on how my trip has also been a little window onto the Islamic world.  Then I realised that nobody likes a pretentious cycle-tourist, and went to bed instead.  To everyone’s great relief, I’m sure.

I was woken after midnight by the sound of rain pounding down outside.  I felt vindicated, and a little smug, and drifted back off again.

The morning sunlight woke me before my alarm went off.  I was confused.  There really wasn’t supposed to be any sunlight this morning (Wednesday).  I looked outside.  There were some clouds scudding about on what looked like a fairly strong headwind.  But nothing that really spelled the sustained heavy rain I was anticipating.

I put my jacket on against the wind, and pedalled onwards in the sunshine.  Towards Osmancik.  More hills, more tunnels, and another 1000-metre pass.  With a beautiful, swooping decent off the top (below), which was only partly spoiled by the headwind. 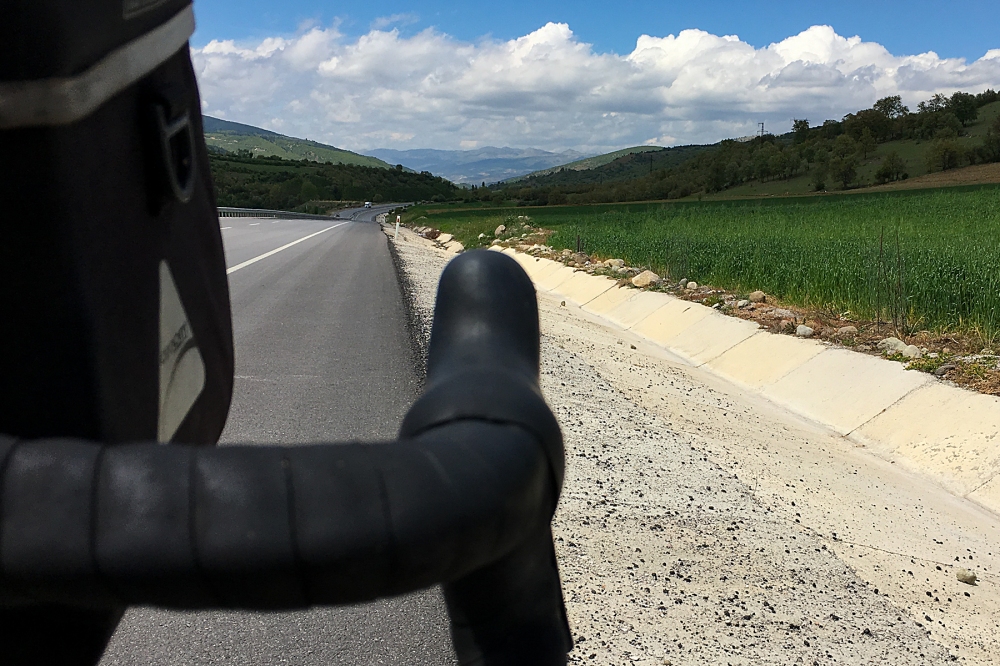 But finally, as you can see above, the horizon was darkening.  A mass of cloud was rushing toward me.  This was obviously the forerunner of the huge area of rain.  I actually thought I’d cut it too fine as I dropped into town, with another small but vicious-looking storm pummelling the valley next door.

As you can see, I didn’t get under cover a moment too soon, as the sky blackened over the castle, and the rain began. 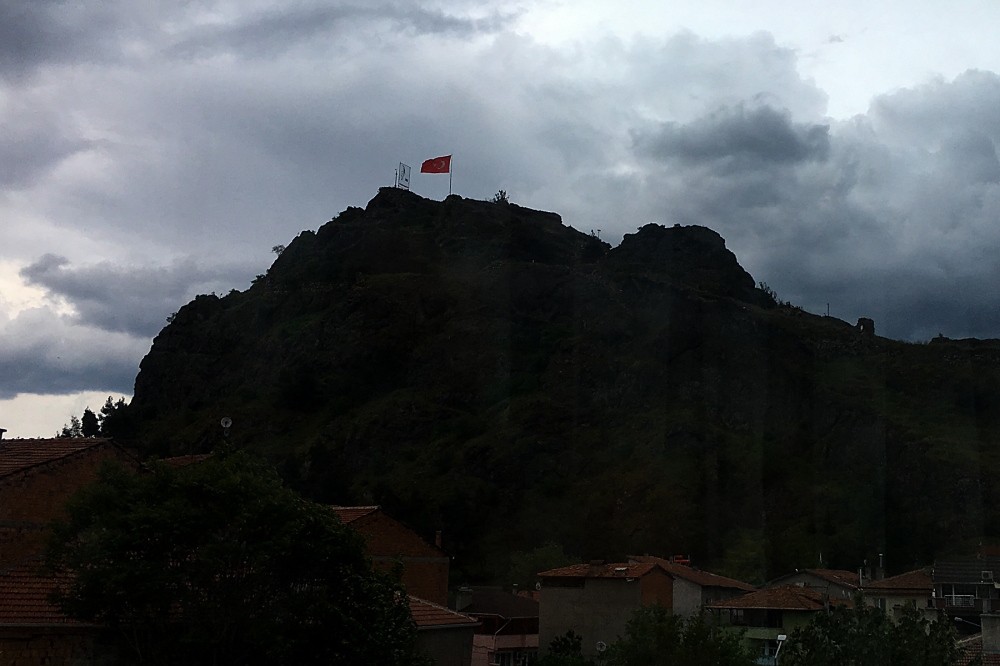 It stopped five minutes later, having barely wet the street.  And although there have been a few evil-looking clouds about since, it’s still dry as darkness falls this evening.

The forecast, needless to say, reckons that it’s already raining here, and will do so (heavily) for the next 48 hours.

However the weather works out, I’ve got to congratulate the Turks on their main roads.  The climbs are very long, but barely get above 3%.  And the road surface is almost silky, meaning that the bike rolls really nicely on the inclines.

So, if the weather seems designed to make me look silly at the moment, the roads are making me look good.

There’s definitely a lot more climbing to come, though.  And I can’t help feeling that the rain’s going to have its say eventually…

* This was a great result: I found a far-flung branch of Decathlon (large, French outdoors store) in Samsun, so was able to get a cheap (but reasonable quality) pair to replace my original shorts, which… erm… seem to have melted.  Or maybe rotted.  Don’t ask…

I’ve covered a fair bit of ground in the last few days.

The sea has remained much the same, and, although it changes colour as the sun appears and disappears, it is still resolutely refusing to live up to its name.  Green, blue, grey, yes.  But never the Black Sea.

Except at night, obviously.

The mountains on the other side of the road have gradually shrunk as I’ve headed west.  Although they still look a little intimidating.  I’ll find out on Tuesday, after a day off here in the city of Samsun. 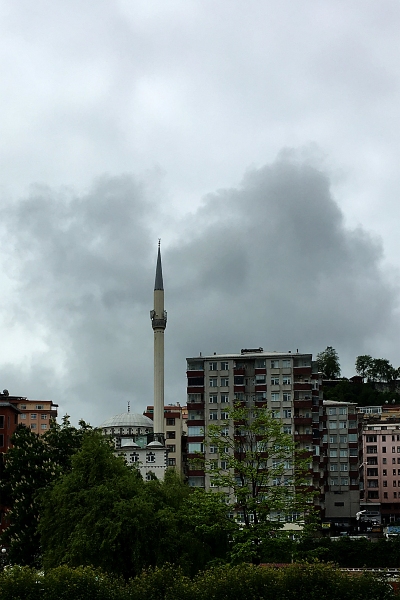 Maybe it’s the terrain, squeezing all the towns into the same shape between hills and the sea.  Or maybe it’s just how things happen when small fishing villages are subject to rapid development.  But every small and medium-sized town along the coast is built on an almost identical pattern.

First, there are a straggle of houses and small businesses along the main road on the way in.  Then, as in the picture above, there’s a mosque in the middle.  The mosque is surrounded by square blocks of flats (usually five or six storeys – the ones above are larger than usual), many of which have shops on the ground floor.  And there are a few cafes and restaurants.  Then, there’s another straggle of houses etc on the way out.

I’ve come to to think of this as the Lego Brick Coast. 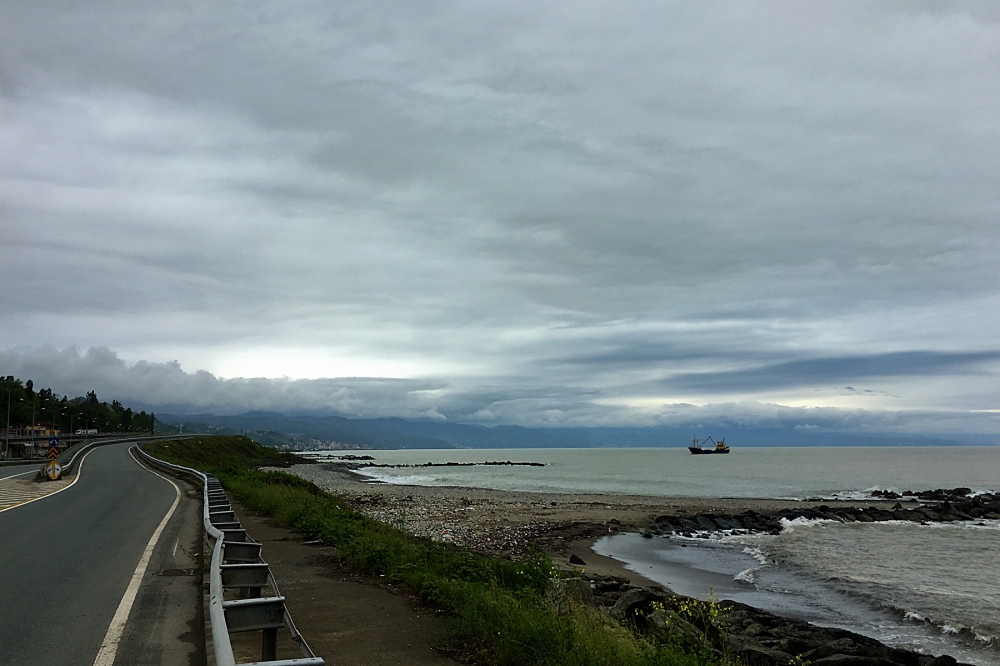 Given that the sea and the towns have remained the same, and that the road has been flat and smooth, it’s been left to the bigger cities and the weather to keep things interesting on the bike.

Despite benign winds, there’s been a constant battle between a huge blob of rain over the hills to the south, and the onshore sea breeze.

When the breeze is winning, it’s wall-to-wall sunshine, and the riding is easy.  When the rain gets its turn, it’s cold, grey and a bit miserable (as you can probably see above).

The bigger cities along the coast provide most of the personality.  My ‘sea view’ at Trabzon (above) was not exactly what I was expecting, but watching the bustling port in action was a nice change.

The steep, cobbled streets of the old town of Giresun provided an unexpected cycling challenge.  And that was before the guesthouse owner and his friend decided to take me out for a few beers (and English practice) on Friday night.  After which, the challenge of the steep cobbles was on a whole different level.

Most of the cities have bundles of building work going on.  Both Trabzon and Samsun are building new football stadiums on the outskirts.  And Samsun already has some imposing architecture, which definitely doesn’t fit into the ‘Lego Brick’ category (below). 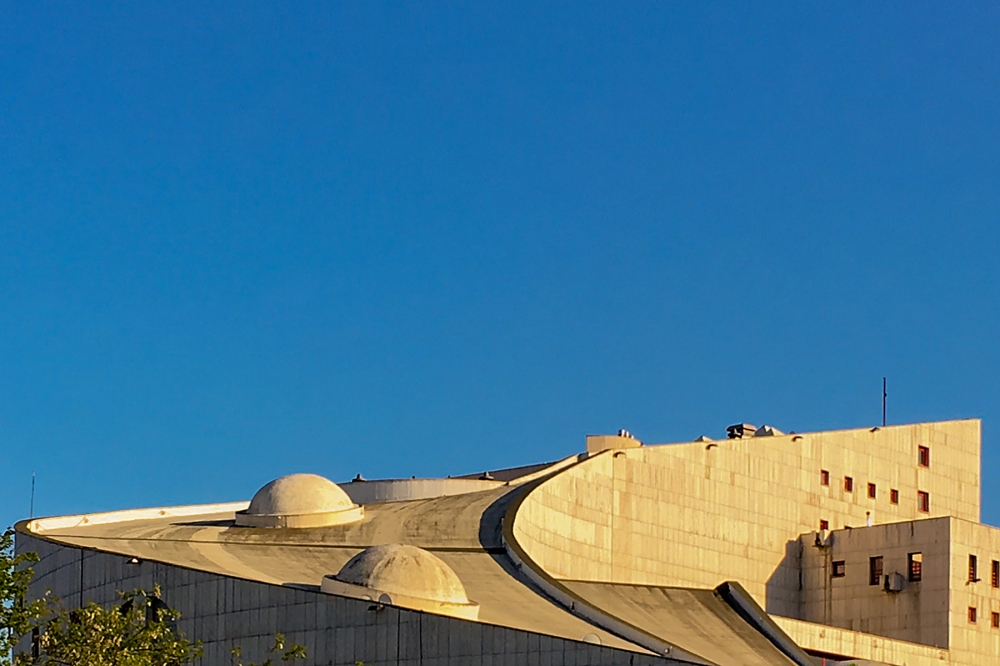 And there have been one or two smaller places which have bucked the identical towns trend.  The lovely old castle and harbour at Tirebolu was the highlight for me, and probably the nicest place for a coffee break on the whole coast: 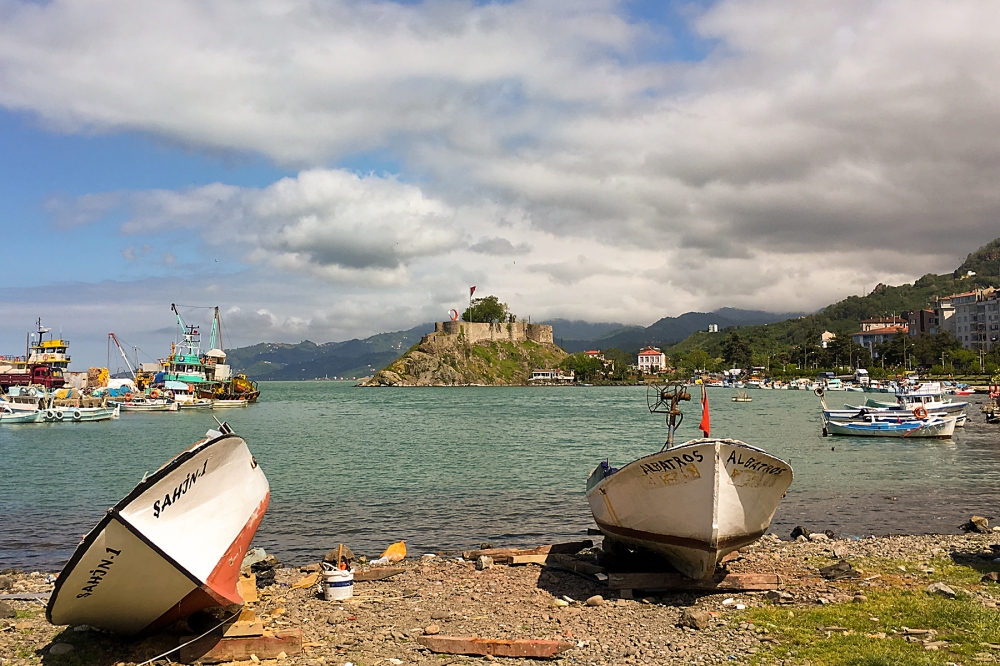 Still, the Black Sea coast, ‘Lego Brick’ or otherwise, is over for now.  I’ll be cutting inland from here, across those big hills.  With a bit of luck, they won’t be nearly as high as those near the Georgian border, where most of the passes are over 2000m.

I’ll use the rest day tomorrow to prepare the legs.  They’ve had it much too easy for the last few days…

On a more personal note…

Today is May 1st  2016.  On this day last year, I was on a sofa, watching the inaugural Tour de Yorkshire professional bike race on TV, while trying to find a comfortable position for my accident-damaged back and shoulder.

The peloton grappled with the beautiful, but rugged, North Yorkshire Moors.  The riders were tackling the roads where my Dad grew up and went to school.  Today, May 1st, exactly a year later, the same race was tackling the same roads again.

And May 1st was Dad’s birthday. 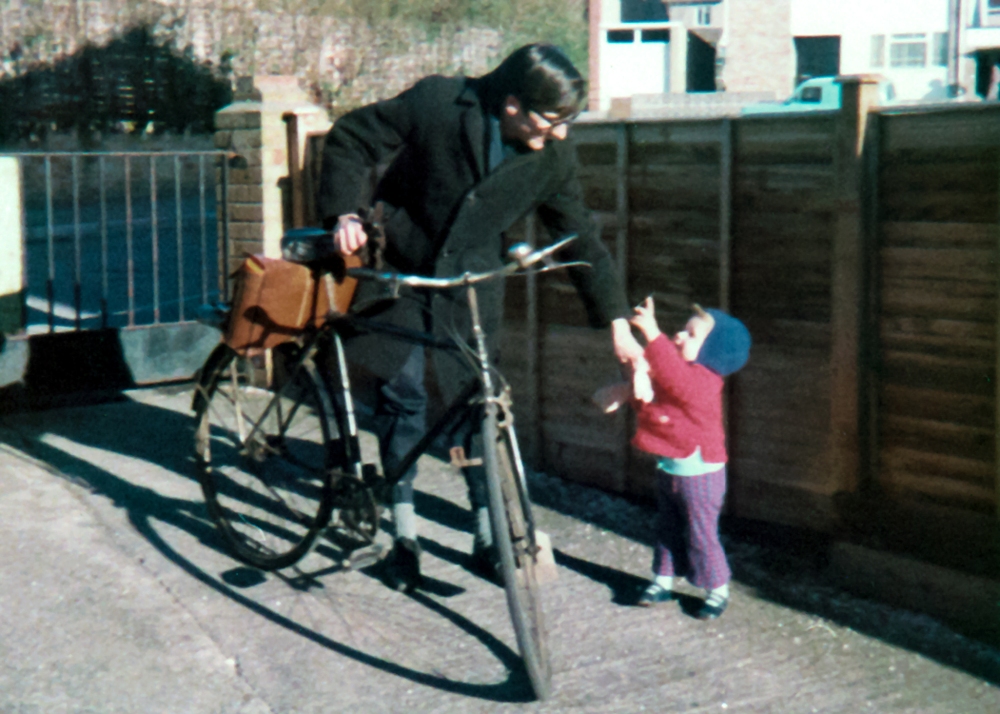 Dad died a few years ago, at the age of only 65.  He died with dementia.  A cruel way to go, and one which is still both incurable and (generally) badly treated by health and social services.  It’s a disease (or rather, a group of diseases) which will affect more and more people as the global population ages.  And, as Dad’s case shows, it doesn’t always wait until you’re old.

I never wanted my journey around the world to be sponsored – too many obligations and too much pressure on what is supposed to be fun.  So this is not a request for money (though I’m sure the organisations below could use anything you could afford).

If you can find the time, though, please have a look at the relevant link(s) below.  Inform yourself about dementia, how it affects sufferers, and just how many of those there may be in future.  And then, maybe, think about doing something about it.

Outside the UK – Alzheimer’s Disease International has a Global List of Dementia Associations with information in your own language: