And yes, punctures are noteworthy enough to get a mention.  That’s only the sixth I’ve had in 12,000 miles of loaded touring.  I like my tyres.

Anyway, most of that mileage has been undertaken on the old Yangon to Mandalay Highway, which essentially runs pretty vertically northwards along the spine of Myanmar.  It’s remained crowded, bumpy, dusty and diesely.  But also flat, which is a bonus.

After the excitement of my first day with zero climbing last week, you’re probably salivating at the thought of what other records could have been set in the last few days.  I’ll warn you now that they may also be slightly underwhelming.

The first ‘record’ was set on the first day out of Yangon (Tuesday).  I stopped overnight at Bago.  I’d also stopped at Bago on the night before I got to Yangon.  Which makes it the first place I’ve stayed overnight on two separate occasions.  In fact, if the rest of my planned route remains as it currently is, it’ll be the only place on the whole round-the-world trip to achieve this honour.

Well, I hope that met your expectations.

The second record is marginally more impressive, as I managed to put together the longest day I’ve yet done on Wednesday: 101 miles (162 km).  And all because of another glitch in the world of online maps.  They really don’t seem to have Myanmar dialled in properly yet.

It was hot, dirty and bumpy, but I did get to meet Marisa and Jiri, an Austrian / German couple, who were heading in the opposite direction.  We had the usual long-distance cyclists’ comparison of notes before they headed south and I headed on north.

After those hard miles, it was great to finally find the first of the smooth, empty highways I was obsessing about last time.  It’s the ‘Expressway’ between Yangon and the new, artificial capital of Myanmar, Nay Pyi Taw.  For some reason, while running parallel, and only a few miles apart from, the old highway, it’s barely used.  Maybe the tolls are too high, or something.

Unfortunately, it was only about 20 km of beautifully smooth dual carriageway before I had to turn off.  And the road (also kindly recommended by online mapping) suddenly looked like this: 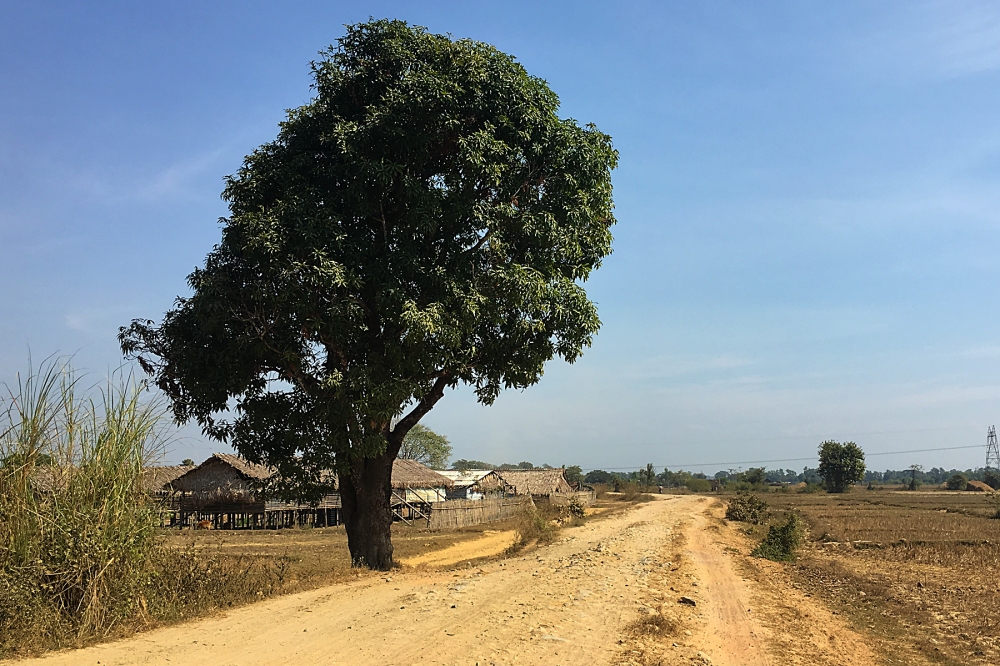 Still, I was well on the way to Nay Pyi Taw by then.  If you haven’t had enough of Myanmar’s oddities yet, Nay Pyi Taw is a classic.  The country had a perfectly good capital, Yangon, but the government decided to move to, essentially, the middle of nowhere.  They built several dual carriageway ring roads, and masses of hotels, conference centres and so on.  It covers a truly massive area.  I think they expected that everyone else would follow them here.

This was one of those ring roads this afternoon.  Again, beautifully smooth.  With absolutely nothing on it, except for me and an ox-cart (or are they buffaloes? Some research required…), which was on the wrong side of the road (so clearly not expecting to face a huge amount of oncoming traffic).

I arrived in the city itself just after five this evening.  I’m about a mile from the city centre, apparently, although I’ve not seen it yet.

But this is what the Friday afternoon rush hour looks like in Nay Pyi Taw:

Yup.  An entire herd of buffalo (or oxen?) crossing the main drag.  They would have been holding up the traffic, if there was any.

And so, I’ve apparently arrived at the heart of the capital city of Myanmar.  Anything resembling a city is elusive in the extreme.  But it seems like an extremely odd place, and I quite like odd places.

I should find out more tomorrow (Saturday), as I’m having another rest day.  Recovering from the road before, and looking forward to some more big miles afterwards.  So hopefully, a bit more intrigue and mystery, and a few more smooth and empty highways to come…