I’ve read a bunch of times about the joys of riding Myanmar’s smooth and empty highways.

This worries me.  Because I’ve not found any such roads in this country so far (with the honourable exception first few kilometres of Thai-built road from the border).  And because I have a sneaking feeling that most people are comparing Myanmar’s roads to India’s, having ridden India first.  Trouble is, that’s where I’m going next.

The average Burmese road surface between Hpa An and Yangon looks a bit like this: 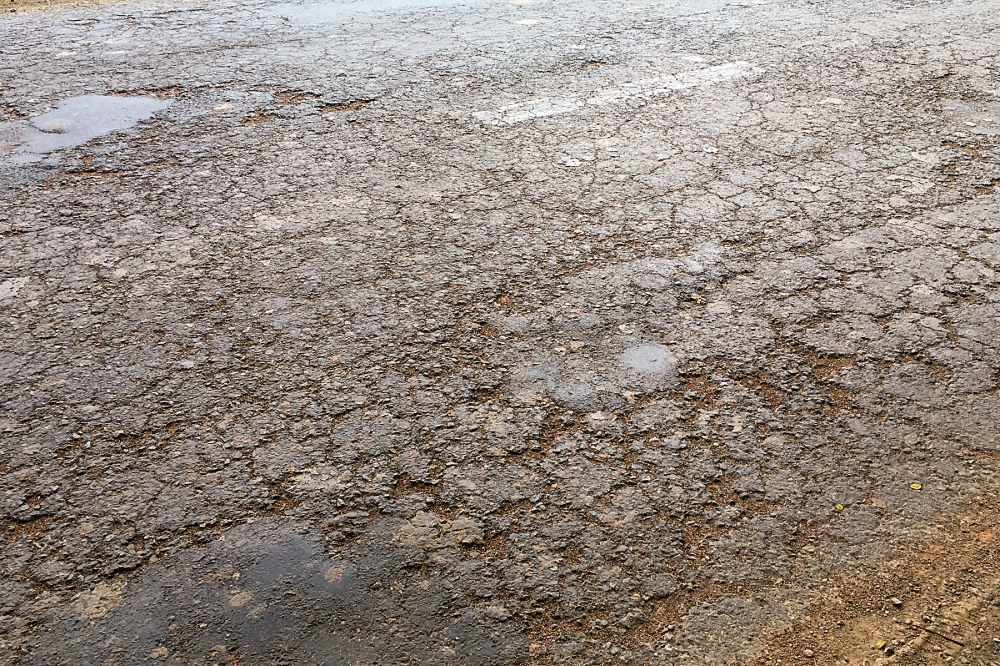 So if India’s too much worse, I’ll be looking to get some serious suspension for the Beastlet.  Or my teeth will rattle loose before I get to central Asia.

The traffic’s varied from ‘interesting’ to ‘lunatic’, but that seems par for the course in Asia.  The trouble here, as in Indonesia, is that the roads are generally much to narrow for the number of vehicles.  A lot of the highways are being widened, to be fair, but a lot of that work appears to be done (literally) by hand, so it may take a while before they improve hugely.

All I can do is hope that the roads will get better en route to Mandalay.  However, I can’t ask that the people improve, as they’ve kept me endlessly entertained so far.  Despite clearly having some slightly uncouth English teachers (the standard shout here is ‘Hey, You!’ rather than ‘Hello!’).

My smiling muscles are having a hard time, again.  The entertainment value is considerably enhanced by the Burmese people’s 1970s attitude to health and safety.  I’ve been cut up by scooters, trying to stop me so they can offer me a tow to the next town.  I’ve watched two young sisters putting plastic carrier bags over each others’ heads as their parents looked on nonchalantly.  And I’ve had to get used to right-hand-drive buses dumping passengers into the middle of the road when they stop.

And the 1970s attitudes even extend to things we used to do at home, back before everyone got afraid to let kids leave the house.  As dusk fell, last night, hundreds of lads were out in the park, kicking footballs around, barefoot in the gloom.  Jumpers for goalposts, anybody?

I suppose I should point out that I never had to play football barefoot when I was a kid.  And that my football days were probably mostly in the 1980s.

Anyway, for the last 30 hours or so, I’ve been resting up in Yangon, Myanmar’s biggest city.  A bit like Vientiane in Laos, Yangon is completely different from the rural areas I’ve been through so far.  Totally unlike Vientiane, it’s a bustling, high energy, 24-hour sort of place.

There are a few havens of peace in the city noise, though.  There are some nice parks to wander through, and then there’s the Shwedagon Pagoda complex. 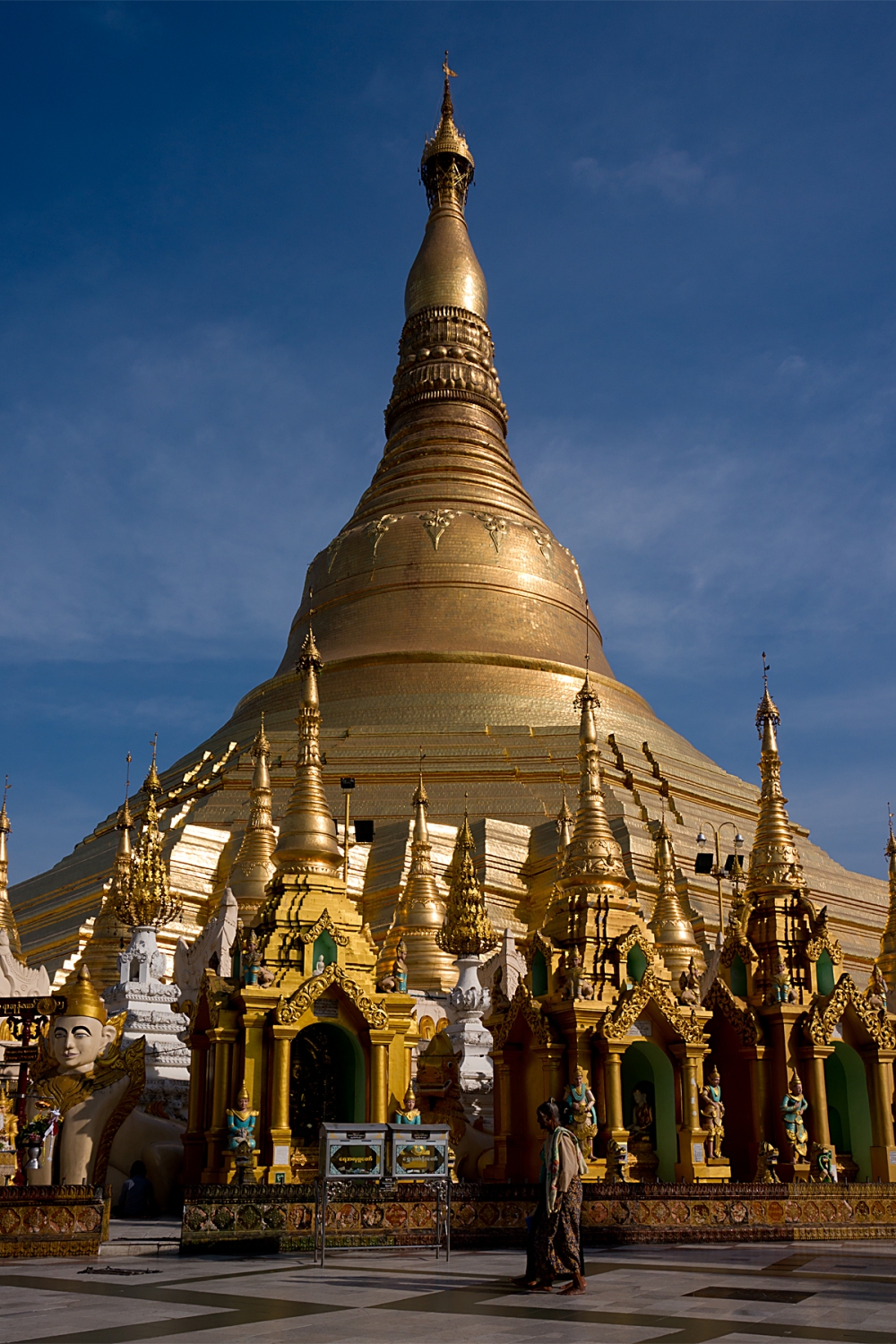 Perched up on a slight hill (there’s been nothing but slight hills for a couple of hundred miles now), the Shwedagon is an absolutely stunning temple complex, built up over hundreds of years.  It made a change to be wandering around somewhere on my legs, rather than on wheels, too. 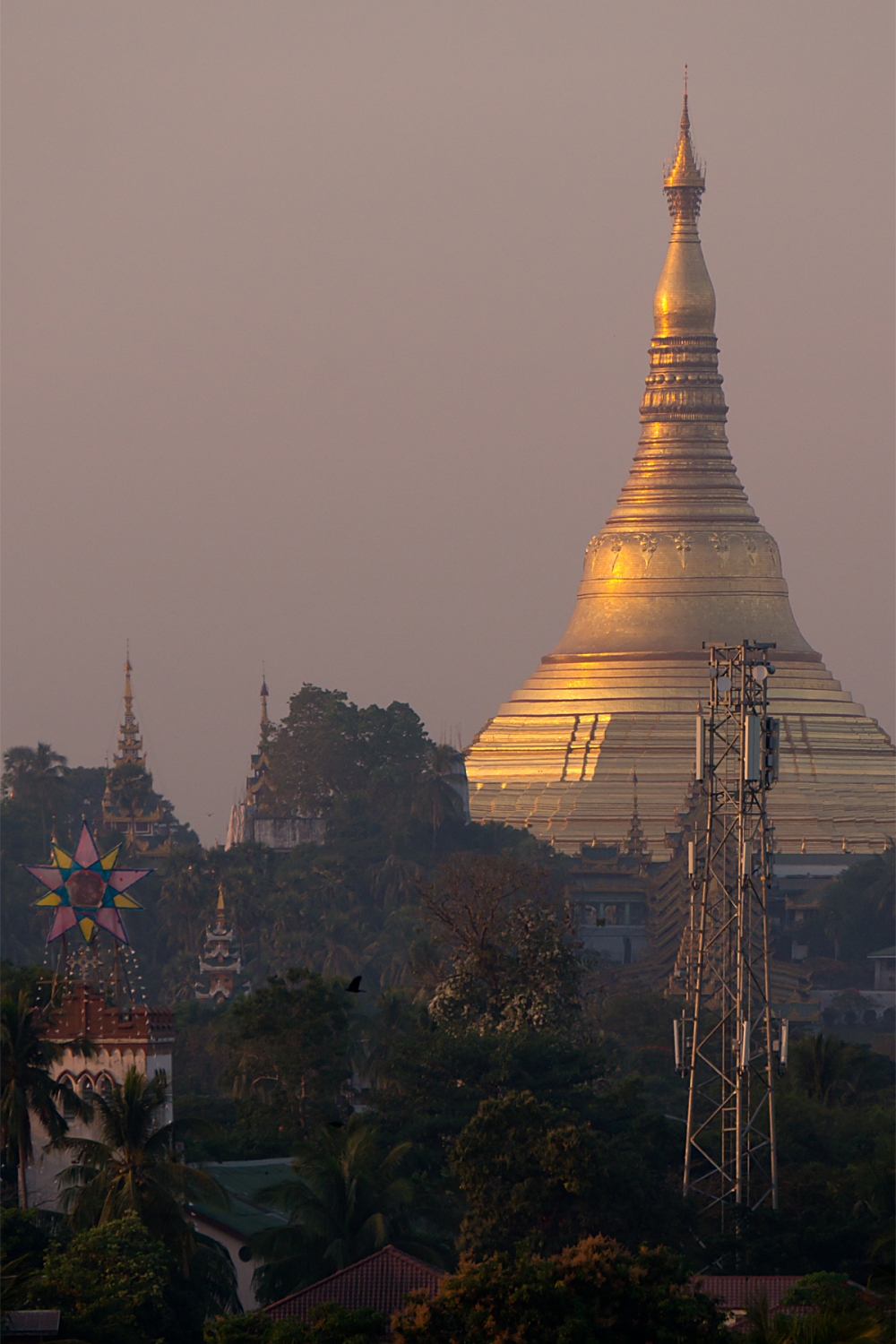 And a swift return to the centre, and a nice cold beer on a rooftop terrace, gave me the chance to appreciate the Shwedagon from afar, as well.  A view only slightly spoiled by the mobile phone mast in the foreground, which I guess is a decent indicator of the speed of change in Myanmar.

It’s still a slightly confusing place.  As well as the various unanswered questions I already had about Myanmar, I’ve added one more.  If you rename a country, surely you rename the adjectives and the people as well?  But no.  People in Myanmar are Burmese (that’s the nationality, rather than the various ethnic groups), and the language is Burmese too.  Everything is Burmese except for the country’s name.

Frankly, I’m becoming less and less sure that I’ll get sensible answers to any of these questions before I finish riding Myanmar.  But I’m not sure it matters.  It’s been a great few days so far, and a few more to come yet.  Just hope those roads improve a little bit…