I’m fully aware that I moan too much.  Especially when I’m having a good time (at least in retrospect; it’s that Type 2 Fun thing again).

Off the central hills of Thailand in time for New Year, and it then looked like a pretty easy run to the edge of the country, and the Myanmar border.  Three relatively short days, two flat and one (today) a bit lumpy.  And the ancient Thai capital of Sukhothai to have a poke around on the way.

Well, in three days of extremes, it was only really Sukhothai which delivered what was expected.  Stacks of ancient stupas and temples from Thailand’s ‘Golden Age’.  I got on there on Saturday afternoon, in time to have a shower, some food, and then a stroll around the historical park (tick off another World Heritage Site) as the sun went down, and it was beautiful.

The reason I was there so early was simple.  The single flattest ride I’ve ever done on a bike.  I know I was having a little whine about how flat it was when I first arrived in Thailand, but this was ridiculous.

In all the 300-and-odd days on the road touring (including the UK Tour), plus every short ride I’ve ever done, I’ve never finished with a climb count of 0 metres before.  There’s always, always one little ramp or even a bridge, or something.  Not on Saturday, there wasn’t.  Not a single metre climbed.  A record.  And one which is unlikely to be beaten, too…

After a much more average ride to Tak yesterday (a few ups and downs, a lot of sunshine, a handful of trucks and exuberant dogs), the switch was firmly flicked today.  Where I couldn’t find a single metre before, there was suddenly a glut.  I’m not actually sure if you can have a glut of climbing.  But there was definitely a surfeit of metres.

The road started to rise straight out of town, and pretty much just kept on going.  A few relatively gentle miles, followed by two ranges of steep hills (one climbing to around 900 metres, the second to nearly 700).  And a lot of bumps in-between.  The Thai border with Myanmar is nothing if not hard to get to…

You can tell you’re in serious hill country when your average speed takes a beating.  Across central Thailand, I was still averaging around 20 kph (12 and a bit mph) through the hills.  Today, I was 20% down on that; every steep ramp followed by a typically grudging Thai descent, followed by another ramp.  Urgh! 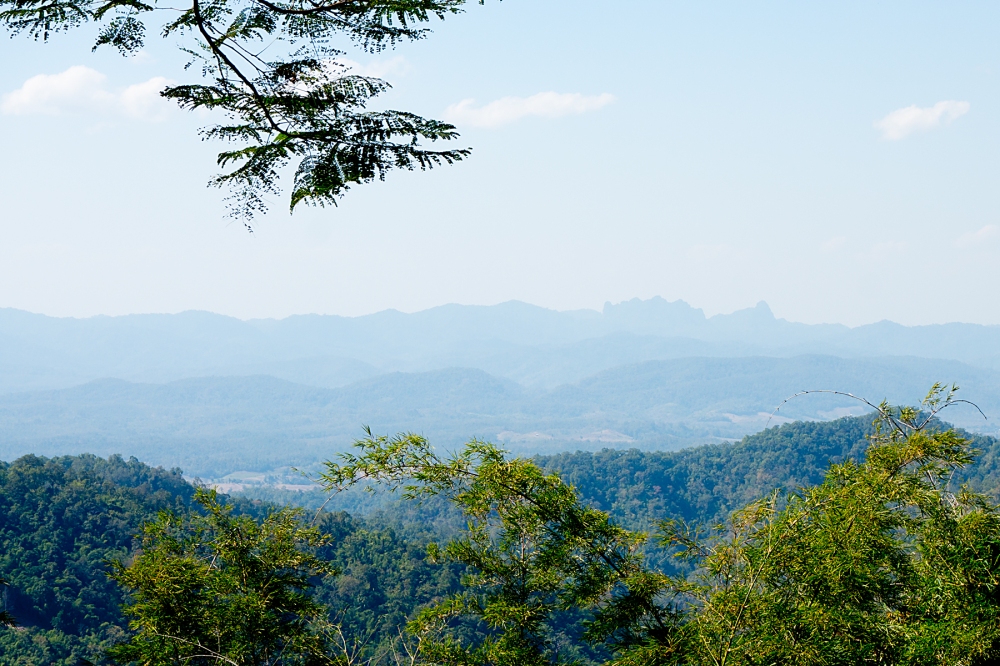 Still, there were some fairly decent views.  And a really testing ride always leaves you feeling like the massive dinner you trough down afterwards is well-earned.  Perhaps more importantly, it also boosts your morale.

Because while I may moan about the hills, the non-hills, or the weather, it’s days like these (when they finish well, at least) that make the trip worth doing.  Testing myself is part of the whole experience.

And never knowing quite what’s coming each day is the whole point.  There won’t be many days where I’m less sure about what’s next than tomorrow (Tuesday).  Just six kilometres (call it four miles) down the road is Myanmar.

I know they only began to open up to the outside world a few years ago.  I know they drive on the right, but that most of their cars are designed to drive on the left.  And I know that the border post at Myawaddy is reputed to be one of the friendliest in the world, for some reason.

But apart from that, I don’t know much.  Should be quite exciting.

Can’t moan about that, at least, can I?