Things took an unexpectedly bovine turn on the way to Wellington.

Having hit my antipodal point (so no more geographical gibbering in that particular vein), I got lucky with the weather.  A bit of drizzle, but a lovely cross-tailwind pushing me fairly effortlessly down the coastal highway toward the capital at over 100km a day.

As I think I might have mentioned before, highway riding can be a bit tedious (between the occasional, traffic-related moments of panic).  And as my mind wandered a little, I began to notice the slogans on signs.  You know the sort of thing.  Where a town or a company pays an ad agency to come up with a few snappy words to capture the essence of what the town or company is about.

These are usually either rubbish, or entirely incomprehensible.  Or both.  American towns seem to specialise in the ‘the best little town until the next little town’, or ‘the home of someone you’ve never heard of’ type of thing.  In the UK, it would be even more mundane; ‘Fourth in the County Best In Bloom Competition, 1983’.  Companies tend to go for the corporate nonsense approach; ‘Your Innovative Lavatorial Solutioneers’, and that sort of guff.

The Kiwis seem to have taken a conscious decision to undermine the whole idea of these slogans.  And good on them.

There are two approaches that I’ve noticed.  The first is the ‘entirely true and obvious’ slogan, which must make marketing companies cry.  My favourite of these is NZ Bridges, who have come up with the magnificent slogan ‘We Build Bridges’.  That’s a company which has clearly decided that the whole thing is far more trouble than it’s worth.

And then there’s the town of Bulls.  Nothing unusual about the place, apart from a name that’s clearly begging for merciless teasing.  But they decided to get there first, and to take on the slogan war with lashings of self-deprecation.  This is likely to remain my favourite town name sign for quite a while: 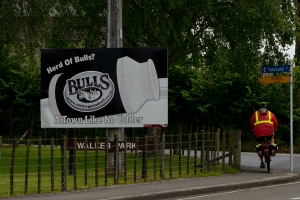 That’s right.  Not one, but two cattle-related puns on one sign.  And the town slogan; ‘A Town Like No Udder’.  Absolute genius.

I was still chuckling to myself about Bulls when I ran into cows.  The highway went up onto a long, very narrow bridge over some marshy land, and the local authorities had, kindly and unusually, built a cycle track across the fields to bypass it.  There was a sign at the start of the track which said ‘Open’.  I told you I was getting a bit observant with signs that day.  Anyway, it wasn’t.  Open, that is.  It was firmly closed, as a forty-five minute stream of cows blithered their brainless way from one field to another.  That’s a lot of cows on a chilly day, I can tell you.  But I did manage to freeze a few in mid-gallop as they panicked about my red jacket and shades.  They seem to run just like very fat horses.  Maybe there’s another new sport in there… 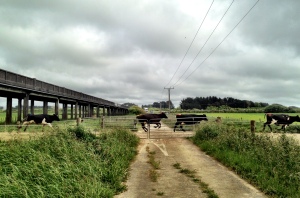 After so much close-quarters bovine stupidity, it was a relief to roll into Wellington on Tuesday evening, knowing that the North Island was now pretty much behind me, and looking forward to seeing the supposedly gorgeous South.  I was given a bed, a feed and a quick night-time tour by Jos, Rocky and family, who very kindly looked after me despite the girls being in the middle of exam season at school.  Thanks again, all!

Wellington certainly lived up to its reputation for wind.  It was still blowing a hoolie after ten at night; everywhere else in NZ, the wind seems to die down after dark.  And it was still blustery (though surprisingly sunny) when The Beast and I hopped on the ferry south yesterday lunchtime (Wednesday).

The sun lasted until the ferry’s final approach to Picton, when the heavens opened, and a good old Kiwi shower lashed down.  It didn’t really spoil the view:

I decided to take it easy today, just to get used to the roads in the South, and to work out what a reasonable daily mileage is.  The downside of the beautiful hills, bays and roads is that progress is not especially fast.  And there are rather a lot of cafes around too.  Repeated doses of cake, coffee and beautiful views are not the most efficient cycling combo.  But they are all very, very nice.

There are, of course, harder days ahead.  I’ll be pushing across the hills for a while until things settle down a bit on the west coast.  The South Island looks stunning already, so I just need to adjust my riding to suit, hope the showers ease up, and relax and enjoy the ride.  It promises to be a good one.