You were warned that this was in the pipeline a few days ago.  A (fairly short, and relatively painless) geography lesson will follow in a bit.  Your options are: to get some coffee so you can pay attention; or to get someone else to read this post for you, and tell you the more interesting parts later.  If there are any, of course.

First, the straightforward stuff.  I arrived in the coastal town of Whanganui (or ‘Wanganui’ – I’m not sure what to make of somewhere with two spellings, both of which are used regularly) on Saturday afternoon, dropping off the freezing hills on a chilly, breezy, but entirely dry day.  The fact that I’m writing this in a garden, and without a down jacket in sight, is proof that the Kiwi spring weather is giving me a break, for a day or two, at least. 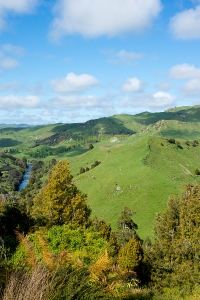 After the tough roads and cold (and occasionally very wet) conditions of the higher mountains, Saturday was one of my favourite rides of the trip so far: not too hot, not too cold, not too hilly (though it was a tad steep in places), and mostly downwards (dropping from over 500m to sea-level).  I was following Highway 4, which I’d been warned was both busy and immensely ugly in comparison with the smaller, longer and twistier alternative.  I’m kind of glad that I didn’t take the option, as it must have been too stunning for words.  As it was, the ‘ugly’ road ran through tens of kilometres of beautiful, hilly terrain, reminiscent of never-ending alpine foothills.  And with maybe an average of one vehicle per kilometre to worry about.  Lovely. 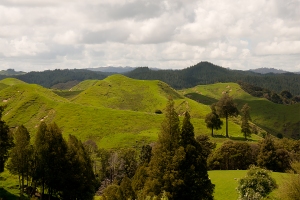 Having dropped all the way to the Whanganui / Wanganui river (first exciting fact; it’s apparently the only navigable river in New Zealand.  How much fun is this geography lark, eh?), The Beast and I stopped for coffee and, naturally, pies, before cruising gently along the riverbank into town.  It seems like a really nice little city (even with proper riverside bike paths!), although the middle is a bit hollowed out, in the same way that many US towns are.  Big-box stores and fast food on the outskirts are killing off the proper shops and businesses in the centre, which is a shame, as it’s a really pretty area here. 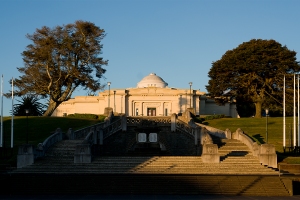 Now, here comes the big geography stuff.  Tomorrow (Monday), as I ride out of town on Highway 3, I will ride across the second of my pair of antipodal points.  This is, perhaps, not the most riveting nugget of news you’ll receive today, but it is important to me.  Why?

Well, I’m riding my bike around the world.  The Guinness records people have defined what a round-the-world bike ride is.  Purely for the purposes of rewarding lunatics who are willing to hammer around the globe as quickly as possible in a haze of exhaustion (and exhaust fumes), of course.  Since it’s the only set of criteria I can find, I want to make sure that my ride fulfils their requirements, despite the fact that it’s laughably slow in comparison with the speed merchants.

The key points of the Guinness criteria are that: the rider and bike must cover at least an equator’s length (24900 miles / about 39800km), including flights etc.; the minimum distance ridden must be at least 18000 miles (about 29000km); and the route should be ridden through two antipodal points.

So what’s so special about antipodal points?  Get your geek hats on; I’m having another sip of cider, and gearing up my ‘keep it patronisingly simple’ writing style…

A pair of antipodal points are a pair of points on exactly the opposite side of the globe from each other.  There are a bunch of sites online where you can look up where different parts of the globe match up (as if you give a monkey’s).  What’s important is that there are very few places where there is land on both sides of the world, because the oceans are very, very big.  For example, the antipodes for the whole of Australia are in the Atlantic Ocean.  This makes finding ridable pairs of antipodals tricky.

Most ridable pairs have points in Asia (from Vietnam / Laos, up through China and Mongolia), which is all well and good.  But the opposite points for these are all in South America (from Peru across into Brazil).  Which is unfortunate, as you’ll recall that I’m not going to South America.  What’s left?  Nothing, except New Zealand, parts of which match up conveniently with Spain.  And you’ll also recall that I’ve already crossed Spain.

On Day 18 of this little adventure, I found myself (scorching, as I remember) in Talavera de la Reina, about 70 miles west-south-west of Madrid.  As I rode west from there, on the N-502, I crossed the A5 motorway.  And this junction, as it turns out, would be my first antipodal point.  Tomorrow (Monday, Day 120), all being well, I’ll leave Whanganui / Wanganui on Highway 3, and will shortly after be on precisely the opposite side of the world from that Spanish motorway junction.

You may be feeling slightly cheated by now, as you come to terms with the crushing realisation that this post is really not going to get any more interesting.  I can’t help that; it’s interesting to me.

And you never know when knowledge, however tedious, may come in handy.  Just remember to thank me the next time you’re impressing your friends with your new-found wisdom about exactly what is on the other side of the world…