There’s every chance that the picture below will look slightly familiar.  Compare and contrast with the road picture in my last post.  Yes, there’s a tree in this one.  Yes, the hard shoulder of the highway is a little wider.  But there’s not much doubt that we’re still in Kansas, is there? 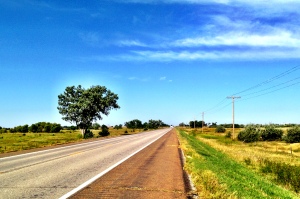 For the record, this is about two-hundred miles from the previous picture, and not a whole lot has changed.  The grass desert just rolls on and on.  As I write, there’s another thunder-storm battering the roof (and presumably the tent, which is some way distant, but hopefully up to it).

And the headwinds just keep on coming, together with more heat, though this is apparently about to break properly.  But I think I’ve cracked those evil winds through Cycling Zen.  I’d copyright it, but I actually have no idea whether it has anything to do with Zen (yet another layer of ignorance reveals itself); it just seems like a good label.

After the rest day in Newton, I was raring to go again on Sunday.  I’d been half-listening to the conversation between the other three bikers on my first night there, and decided to follow Ian and Alejo’s example by switching routes from the TransAm to the Race Across America (RAAM) route, which finishes close to San Diego.  It cuts a little further south across the Rockies, but still drops me out on a good line for Monument Valley and the Grand Canyon.

With the remnants of a tailwind(!), I made 80-odd miles that day, charging across the featureless plain like some sort of caffeine-and-sugar-fuelled buffalo.  On wheels.  Roughly.  I reckoned I’d make it to Dodge City (who could miss the real Wild West if passing reasonably close?) in another day, easily.  Just the same again, thanks.

It took two days.  And pretty much two whole days.

It became apparent yesterday that the headwinds were back with a vengeance.  And the weather people were talking about 25mph winds for today (they were right, by the way).  I mindlessly deployed the same tactics I’d used on that horrendous day to Eureka, put my head down and put the pressure on as hard as I could.  More sweat, more aches and pains, and a grand total of 42 miles covered in a total of eight-and-a-half hours, including about a thousand stops for water and to ease sore muscles.  A one-legged tortoise would find that a tad on the less-than-quick side.

I spent the evening considering my position.  This was not fun.  This was not even sustainable; remember how horrible that ride to Eureka had been?  Could I even face another day like that?  Clearly, a new approach was required, which is where Cycling Zen came in.

I had about another 40 miles to get to my target campsite at Dodge City.  You can walk 40 miles in a day, at a push.  And however slow I ride, I’m always going to be (a little) quicker than walking.  So I was going to make it today.  That was a fact.  And the speed didn’t matter.  Another fact.  The wind could do what it liked, and I’d just go as slow as necessary to take the pressure off my legs.  I’d retreat into a little bubble of non-worry, telling myself amusing stories (these are unprintable, so don’t get your hopes up), and try to enjoy the ride.

My moving average speed today was 8.4mph.  That one-legged tortoise is killing himself laughing.  But I rode without pain or effort, and with a smile on my face.  A slightly loopy smile, but still…  I only stopped a couple of times for drinks, and for lunch at a truck stop.  And somewhat miraculously, within six hours, I saw this: 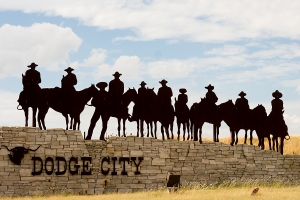 So…  Going slower in headwinds makes you quite a lot faster over the course of a day, and happier to boot.  There’s a lesson I didn’t think I’d learn.  And a new weapon which will get me through the headwinds.  Don’t fight it, just relax, switch off, and enjoy the ride.  Cycling Zen.  Or arguably, just what cycling should be all about, anyway…

There’s a lot of history in Dodge City, so I’m taking tomorrow (Wednesday) off to explore.  More from the Wild West soon.