I’m not sure how it happened, but I’d hit a fairly low ebb a few days ago.  The constant thunderstorms and heat had probably got to me, or maybe it was just too many days in a row of ploughing west across the USA (I think I might have mentioned that it’s quite big).

It got worse before it got better.  Kansas is where the US begins to stretch out; there’s less to see, and ever larger gaps between towns, shops or petrol stations.  This picture is pretty typical of the east of the state – outstandingly long, fairly flat, and almost featureless.  Road and grass and telegraph poles.  And I now know that the west will be very similar.  Some people call it the Grass Desert.

I’m having to carry extra water for the first time since Spain, and for the first few days in Kansas the elements were not kind.  By the time I shambled into Eureka, after 50 miles which had felt like a hundred, and with a rather artistic batik-style design of dried sweat all over my clothes, I was nearly in pieces.  But coming the other way was another tourer (the first I’d seen for days), who turned out to be Kat, from England.  I can’t explain how good it was to get some food and have a few beers and a long chat with a fellow Brit, especially one who’d also spent the day being pasted by heat and headwinds.  Kat is in the middle of riding the TransAmerica trail from Oregon to Virginia (a chunk over 4000 miles).  As I’ll be following her path (in reverse) until the Rockies, she was also a gold mine of useful information about my days ahead.

Yesterday was a case in point.  First, Kat had given me a target to aim for; Newton Bike Shop, of which more later. And I now knew that the TransAm route from Eureka to Newton only has one place to buy water and supplies in over 70 miles, and that there are a couple of sections of gravel road (which is fun, but very slow).  It’s mainly westerly, but with about twenty miles of north thrown in as well.  The wind flipped around to the north-east in mid-morning, and without the inside info, I’d have been straight up the TransAm route, and would probably have run out of water in a cloud of headwind-blown dust way before I got halfway there.  Oh, and there were thunder storms forecast, yet again, and that sort of distance with virtually nowhere to hide could have been nasty.  This didn’t look like a good idea.

As it was, I made an informed decision to leave the route, and head towards El Dorado, before cutting back up to Newton.  This worked a treat, breaking the northward stretch into two smaller chunks, and ensuring I was closer to shelter and supplies.  The only downside was that it was all highway riding (see that picture above again for what the road looked like; it’ll serve for most of Kansas).

So, yesterday afternoon, I rolled up to Newton Bike Shop.  Not too tired, and not wet, bedraggled, or struck by lightning.  A good day. 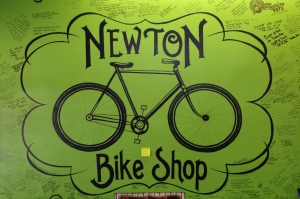 I’m resting here today (Saturday). I’m bang in the middle of the TransAm, and pretty much in the middle of the US.  And it really is a little corner of touring cyclists’ paradise, with a hostel section, as well as laundry facilities and bike repair (not that The Beast seems to be in any need of repair).  It even has an indoor ‘bike shower’ to properly pamper the machinery.

There were three other cyclists here when I arrived, although they’ve all headed off today.  Ian and Alejo are heading for San Diego, so it’s not impossible that we may cross paths again, while Debbie is heading east on a modified TransAm route.  Pizza and ice-cream and chats about cycling last night; more therapy for my psychological bumps and scrapes – it’s a lot easier to deal with when you know there are others out there having the same issues.

And finally, I found a real contender for ‘best loo-roll holder of the trip’ (a new competition that I’ve decided to set up to fill my emptier hours):

There are, needless to say, no other contenders at present…

Back on the road tomorrow, with the western half of Kansas still ahead before I hit Colorado.  I’m well rested, well fed, and have even had a shave and haircut.  I may not recognise myself in the mirror anymore (I wasn’t quite aware of how yeti-ish I was getting), but I’m hopefully back on form and ready to push on.