Well, this is a surprise.  I thought this would be a little retrospective glance at the trip so far (yesterday was the one-calendar month mark since my departure from Greenwich), written from another location somewhere in Southern Ontario.  Instead, I arrived in the seething metropolis of Sandusky, Ohio.  Country number six already, and this one will last for a little while.

I’d intended to head for the big border crossing at Windsor in Ontario, which drops you into Detroit.  I’d built up an impressive collection of shocked facial expressions from the various Canadians regarding this plan.  Responses ranged from “turn left and ride like [insert four-letter-word here]” to “you’re going to ride through Detroit on surface streets?  That’s suicide.”

Now, there may be an element of exaggeration to these reactions.  All the people in Southern Ontario live in a delightful, semi-rural or rural environment with (as far as I could see) very little in the way of crime etc, and no big cities.  So maybe they were overstating things.  I have a standard response to this sort of thing, which is to research.  And a good job too; turns out that the Windsor-Detroit border is very difficult to get a bike through.  The whole place is set up for trucks and cars, and I’d need to bag the bike, put it on a bus, and so on and so on.  Looked like a nightmare.  And the alternative border crossing at Sarnia would take me a few days out of my way to the north.

One final act of Canadian goodwill was to come; a tip-off about the small ferries which run out of Kingsville (the most southerly town in Canada) to Pelee island (the most southerly island in Canada), past Point Pelee (the most southerly point in mainland Canada).  Lots of ‘southerlys’ there, then…  It should then be possible to get another ferry to the US from Pelee Island.  And it worked beautifully; I’m in the USA a few days earlier than expected, having had a nice boat ride, and a very friendly, quick and non-problematic entry to America.  A good route for any bikers heading this way. 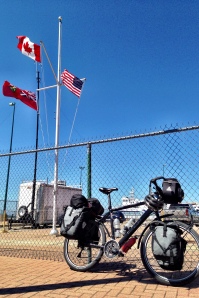 The Pelee area of Ontario is quite interesting, by the way, and not just in its role as an important stop for migrating birds, of which I’m sure you’re all aware.  Remember Terry from Brantford?  He’d told me about Point Pelee when we were discussing places to camp, and said that it was so far south that it was level with Northern California.  This seemed extremely unlikely to me, so I checked up.  And it’s actually true; there are tiny bits of Ontario which are to the south of the California / Oregon border.  Who knew?

In any case, I’m getting set for the first day’s ride in the USA; basically I’ll be heading roughly west-south-west for a couple of months.  The plains, the Rockies, the desert and the landmarks of the West (Monument Valley, the Grand Canyon etc) hopefully lie ahead.  Plenty more from the US to come, I’m sure…