Back at home in the UK, there’s an ancient summer tradition of kids riding donkeys at the seaside.  That’s on the five days of the summer that it’s not raining, blowing a gale or freezing cold, obviously.  And on the couple of beaches from which animals are not banned in the name of health and safety.  It probably doesn’t happen quite as much as it once did. 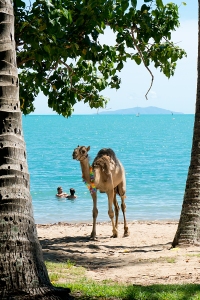 In Queensland, it’s a little different.  There’s a camel train which wanders along the (fairly tiny) Airlie Beach, and it looks like it’s there to stay for another generation, at least.  The little chap above was being trained (not especially effectively, it appeared) to follow the rest of his family around, in preparation for a lifetime of trudging about with apes on his back.  I suspect the Beast sympathises. 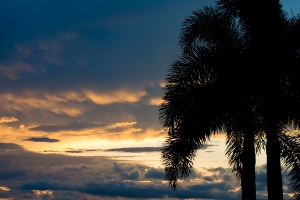 The sunshine and heat lasted for another day before I had something else to moan about.  At sunset in Bowen on Tuesday, I could already see clouds building behind the palm trees.  And by the time I started rolling up the highway on Wednesday morning, it was to the accompaniment of dire predictions of thunderstorms, torrential rain, and even possible highway closures due to flooding.

This was a bit of a bummer, as I was hoping to get to Townsville (roughly 200km / 125 miles away) by this evening (Thursday).

It’s been known to rain in the UK in the summer, too, so I shrugged off the warnings, slapped on the factor fifty, and pootled off determinedly up the road.  By lunchtime, I’d begun to think that I might get away with it, and make it to my target destination of Home Hill before anything too dramatic happened.  Then I stopped for a nice cold drink at the tiny hamlet of Gumlu, and emerged to see this hurtling down the road towards me: 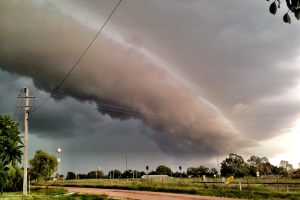 Needless to say, the Queensland rain’s not quite the same as at home either.  I spent three hours cowering in Gumlu as wave after wave of clouds unloaded, along with a spectacular lightning show.

Just as I thought I’d be stuck there forever, the clouds parted.  Enough time to dash the remaining 40km?  It looked like it might be.  And it would be light just about long enough, too.  I shifted into time-trial mode, ignoring the protests from my legs, and floored it.

For about ten kilometres.

Then I got a flat tyre.  Only the fifth of the whole trip.  Just one every 39 days.  So why, oh why do I get one in the middle of nowhere when I’m trying to beat a gazillion litres of airborne water to the next shelter?

I’m still not sure whether the puncture did me a favour in the end.  I was still 15kms out of Home Hill when the rain began again.  Amazingly, the arrival of the heavy stuff coincided with me spotting the illuminated sign of the petrol station / hotel / campground at Inkerman.  In I dived, and was rewarded by their phenomenal ‘waifs and strays’ policy – a free worker’s cabin (rather dubiously known as a ‘donga’) for the night.  Lucky, lucky boy…

Today’s forecast was even worse that yesterday’s, so I didn’t really expect to make Townsville.  In fact, I only just scraped that elusive 15kms to Home Hill before cloudburst number one arrived at eight this morning.

I hung around (under shelter) in town for a couple of hours, but things didn’t improve a great deal: 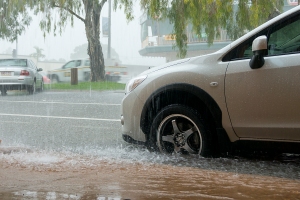 And so in Home Hill I remain.  As I write, the sixth cloudburst of the day is ongoing.  At home, one shower like that would clear the air for days.  Not here.

Things are forecast to be a little better tomorrow, so I might be able to scramble up to Townsville with just a few showers to dodge.  My optimism remains undimmed.  More likely, I’ll make it to the next town, Ayr, and get stranded again.

So, summer in Queensland.  Animal rides on the beach and changeable weather.  Sounds very much like an English summer on paper.

But it’s really, really, not the same at all.