The Balkans are a complicated part of the world.

So I suppose it’s not surprising that things got a little bit complicated for me before I got to Skopje yesterday (Thursday).

Two different sources had told me the road to Skopje was flat. “Pan flat”, they said. “Easy”, they said.

It wasn’t either of those things. Which proves that local knowledge should be taken with a healthy (or unhealthy) pinch of salt. 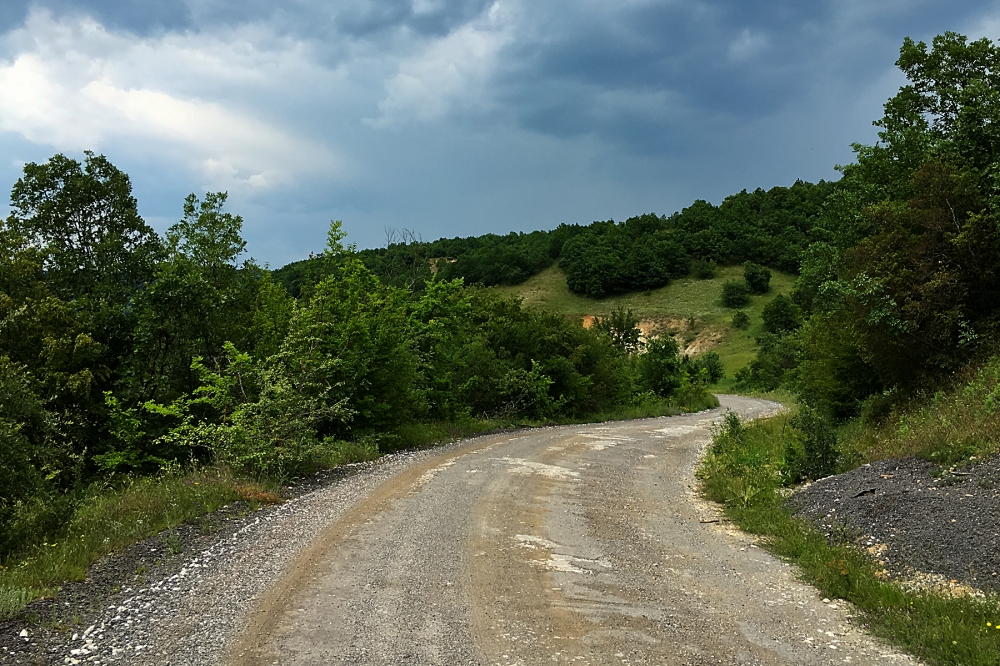 It was false flat, most of the time; just rising enough to wear me out (especially in combination with the constant headwinds). It was hard work. And then, there were hills. Quite big ones, with roads where the surface fell apart (above).

And, to top things off, there were the Macedonian cobbles: 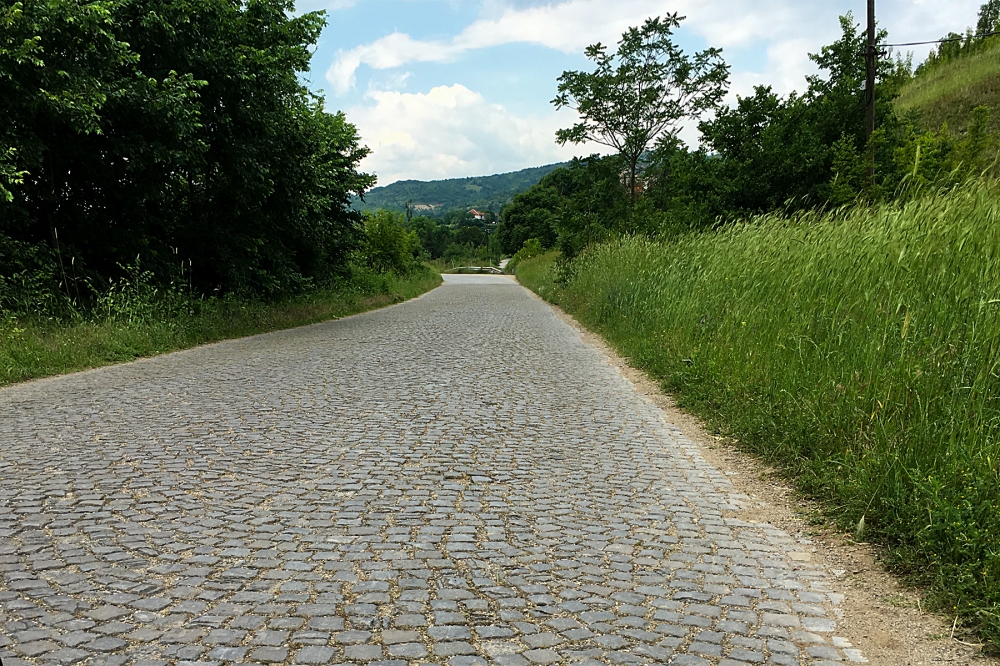 Right out in the countryside (and running for miles, sometimes with a thin skim of tarmac, sometimes not). Someone spent a huge amount of time and effort laying all these cobbles. It’s just unfortunate that they’re a recipe for snake-bite punctures if you’ve forgotten to pump your tyres up rock hard.

Thankfully, the puncture was quickly fixed with a ‘revolutionary’ instant patch kit that I got free with a big internet order for bike parts.

Less thankfully, it turns out that ‘revolutionary’ actually means ‘doesn’t work’. So I spent the rest of the day rushing a few kilometres, followed by stopping to pump up an increasingly quick ‘slow’ puncture. Eventually, just a few miles out of town, I had to get the wheel off again, patch the patch, and hope that I could roll into Skopje before the tyre went down again. I did. Just.

Thankfully, I was due a day off today, so I bought a new inner tube. And had a nice wander around town. Which proved to me that the Balkans are even more complicated than keeping my tyres inflated.

First, the Macedonians seem to build their cathedrals like mosques (complete with minarets): 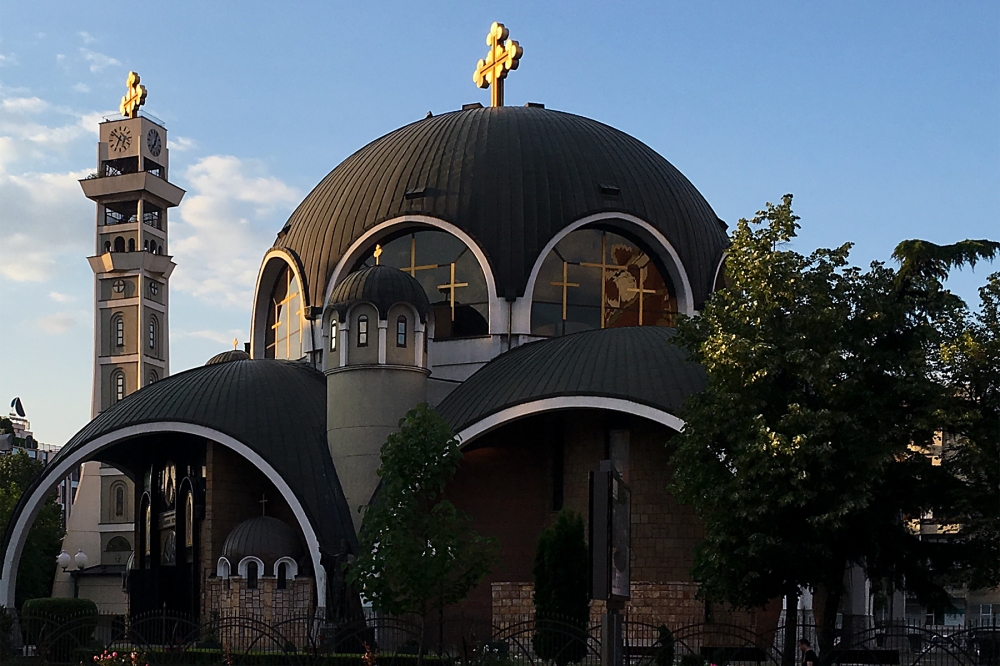 I’d guess that this architectural style probably has something to do with the Ottomans (again), who ran most of the Balkans for a long while.

But the Ottomans can’t explain all the odd cultural thefts that seem to abound around here. 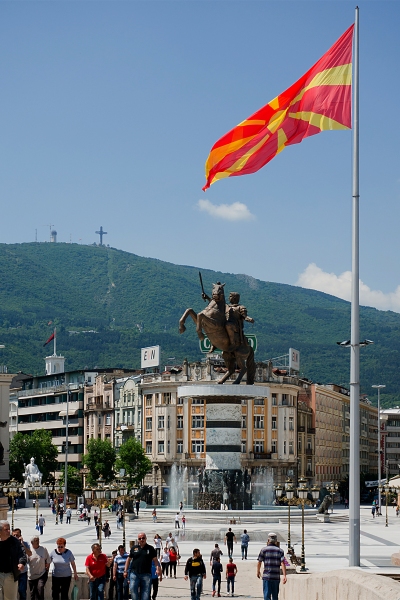 Alexander the Great (also known as Alexander of Macedon) sits proudly on a column in the main square in Skopje. Him and his Dad, Philip, pop up all over the place. Statues, motorways and stadiums are named after them. Big Alex built an empire which reached all the way to Egypt and India within just a few years, and then died at 32. He was a major over-achiever.

He was also, very definitely, Greek. While modern Macedonia was part of the ancient kingdom of Macedon, the town Alexander was born and raised in is in modern Greece. And he was, by all accounts, ethnically and culturally Greek, too. Not Macedonian in the modern sense at all.

So, Macedonia seems to have pinched Alexander from the Greeks. The Greeks are not happy about this. Or about the Macedonians using the name ‘Macedonia’ for their country, either. In fact, the Greeks are so upset about this that it’s holding up all sorts of international negotiations.

The Macedonians also appear to have tried to pinch stylish, red double-decker buses from London: 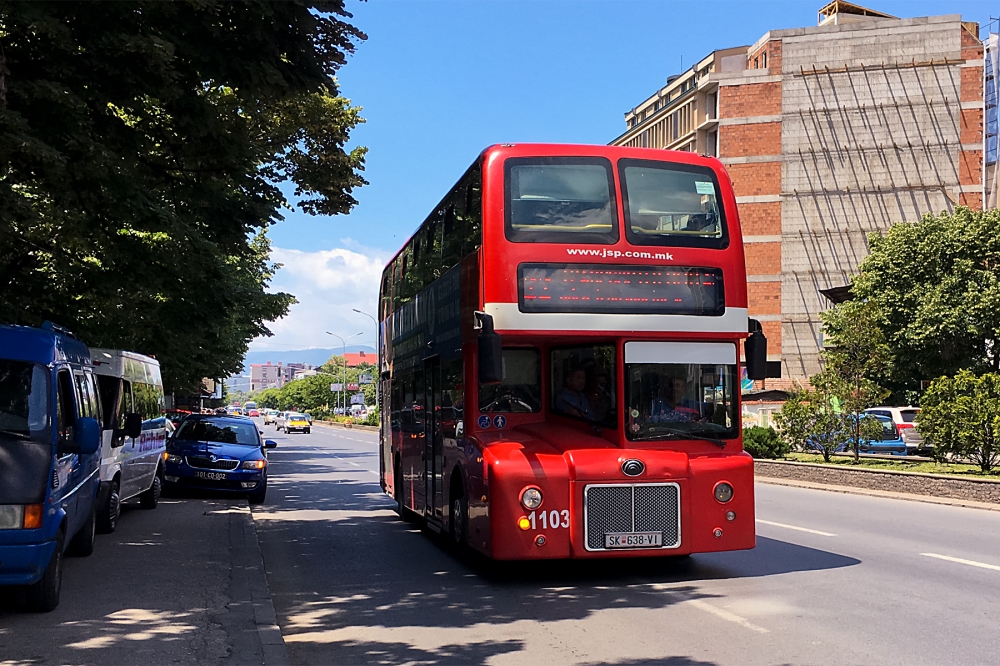 They look a bit odd, as if they’ve taken a modern bus and welded an old-fashioned driver’s cab on the front. But I suppose imitation is some sort of compliment…

Possibly in revenge for these cultural appropriations (but probably not), the Albanians next door seem to have got in on the act as well.

Everyone knows that the world’s most famous Albanian was Mother Teresa. Tirana airport is named after her, and everything.

Except Mother Teresa was born here, in Skopje. She was Macedonian, in modern terms (though Ottoman at the time). So, it looks like the Albanians pinched her from the Macedonians.

It’s all really complicated, isn’t it? 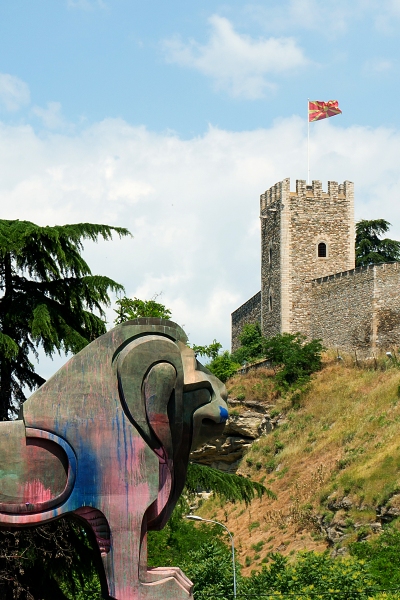 Anyway, what is clear is that Macedonia is a beautiful country with friendly people and bad drivers. And cobbled country lanes. I’ve enjoyed it so far, and I’ve still got another couple of days before I get to Albania.