Well, the last few days have been a bit of a rush. And it’s not quite over yet.

I’ve had tailwinds all the way from Thurso. On the most exposed section of the ride, where the ‘normal’ should be rain-laden headwinds. I think I’ve made the most of the unexpected assistance. At the same time, both Covid and non-Covid related disruption to transport and tourist accommodation have made their presence felt much more up here than elsewhere in the country.

I guess it helps you to appreciate that this area is properly remote, by European standards, at least. From the small town of Thurso, near John o’Groats, to the small town of Stornoway (above) in the Outer Hebrides, where I wrote the last post, it’s over 140miles (about 230 km) of riding, plus a 3-hour ferry ride. In between, there’s a handful of villages and some stunning countryside – see the pictures on the previous post. But not much else. Apart from sheep. There are lots of sheep.

As the last post hopefully showed, I made a lot of ground quite quickly out of Thurso, along a route which got steadily more beautiful as I got further west. A little rain, but not enough to ruin things. A few midges (some of the bites are still itching several days later), but not the massive bloodthirsty midge-storms you sometimes hear about up here.

It was all going fine until Ullapool, where I really needed a shower, and instead found everything closed (to tents at least). So, a quick switch of direction led me onto the ferry to the Hebrides. At least it meant I didn’t have to agonise too much over whether to head for the islands or stick with mainland Scotland…

And the Outer Hebrides have been good. Dramatic scenery, of mountains which have been partially smashed over millions of years by Atlantic storms. Improved further by a following wind, which has pushed me along very easily. There’s even a marked Hebridean Way cycle route from top to bottom (like all the other signs up here, in Gaelic first, English second). 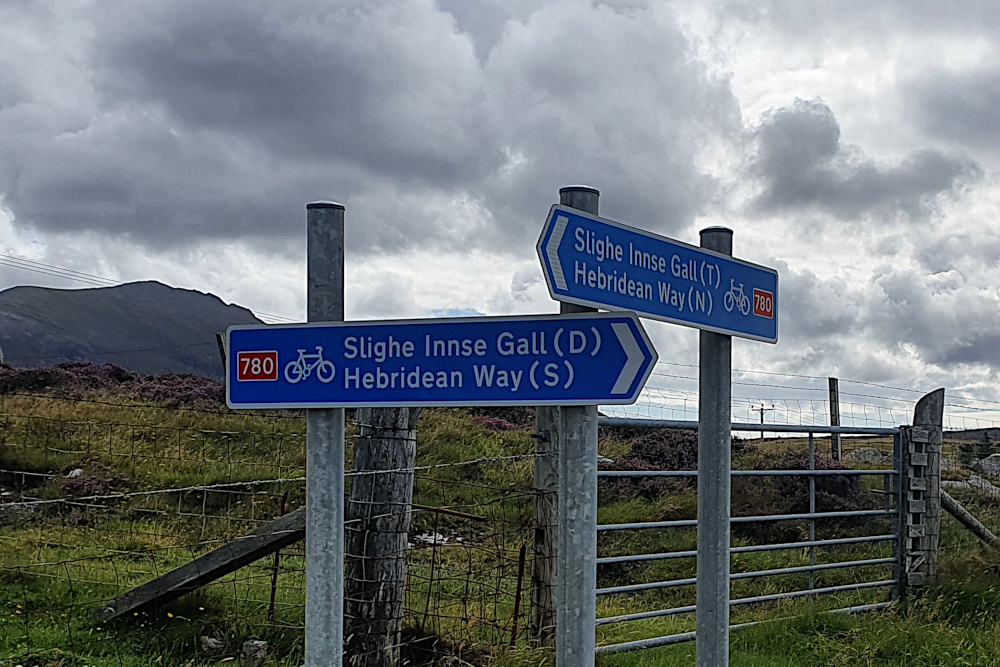 The only downsides are that it’s a cold northerly wind, and the thermals and winter gloves are out already. In August! And that ‘everything’s closed’ is a phrase which has cropped up far too much in the last couple of days.

Thursday began in Stornoway, and was intended to be a relatively gentle meander through Lewis and Harris (confusingly, these act as if they’re are two separate islands, but they’re definitely joined together). The Lewis part went nicely, zipping south at a rapid rate (above and below), although there was definitely a lot more heavy cloud than the forecast – light cloud and sunny spells – had suggested. 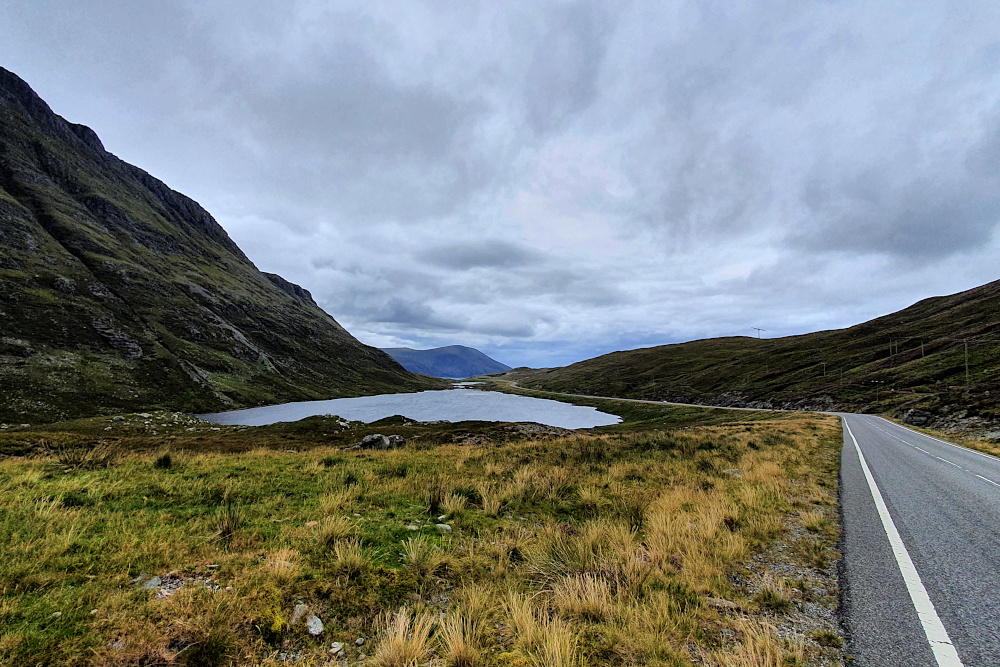 Unfortunately, the weather forecast got even less accurate as the afternoon went on. Harris, I’d been assured by other cyclists, was stunning, with some beautiful wild camping near lovely beaches. I couldn’t see it myself. Literally – all I saw was raindrops on my glasses, and sheets of rain sweeping across the landscape.

I was soaked and being chilled by the northerly wind. Not a great combination. I headed for the ferry stop at Leverburgh, on the basis that I could probably find somewhere to warm up and dry off before camping. No such luck. Everything apart from the ferry itself was shut, and the last one of those was about to head to the next island, Berneray. I got on it.

Some frantic phone tapping on the boat revealed that there were no open accommodation options within range on the other side. The Covid effect again. So it would be wild camping. Which would be fine, except that I was already shivering, and the chances of drying off properly in a little tent were low. I ended up staking my claim to the ferry waiting room on the other side; no heating, but four walls and a toilet, so it actually worked out OK, and I was warm, dry and ready to go early the next morning (onto North Uist – above). 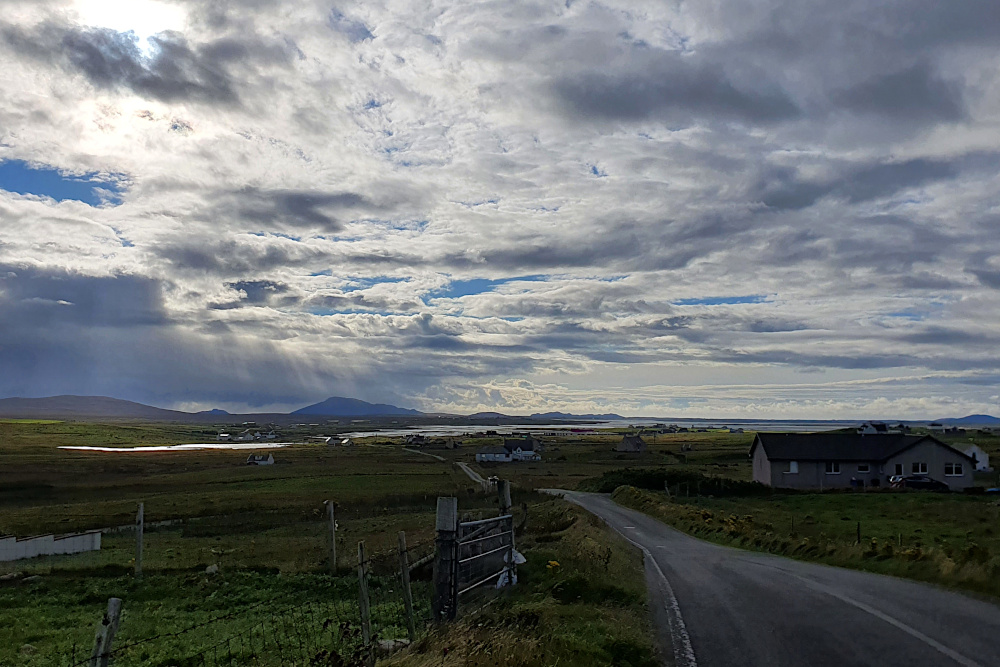 And yesterday’s run down to the southern part of South Uist (via Benbecula – that’s a lot of islands already!) was lovely. The weather was what it should have been the day before, and I was jetting south along flat(ish) roads. 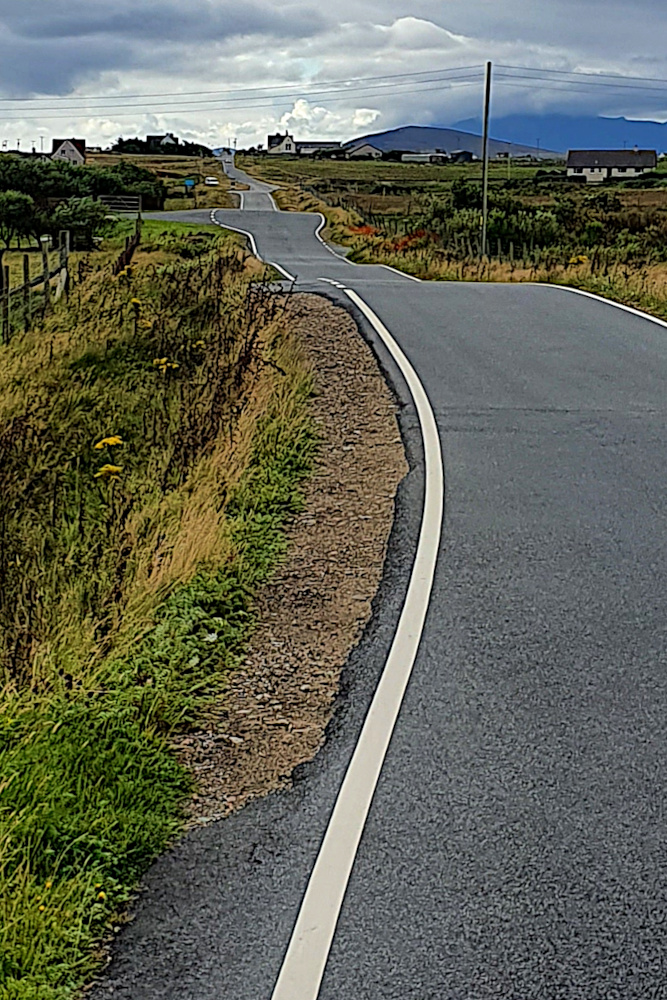 The biggest challenge along the Hebrides chain has been the single-track main roads (above). These are ‘A’ Roads, so you’d expect them to be high-volume, fast routes, possibly dual-carriageways. Things are different up here. There are some sections that have white lines down the middle, but also long stretches where you have to dart between passing places. I guess it’s another function of how remote and unpopulated this region is. But it makes for a really strange riding rhythm; sprinting and stopping all day, instead of a steady effort.

Anyway, I rolled down to close to Lochboisdale yesterday, in preparation for this morning’s early ferry to Mallaig, back on the mainland, and one end of what’s now known as the ‘Harry Potter Railway’.

But, in case it wasn’t already clear enough that I’m not on the mainland yet, there’s a cattle market on somewhere (I’m still not clear exactly where this is). This means that the Mallaig ferries are all cancelled. It would, perhaps, have been useful to know this before I charged the length of the Outer Hebrides, and possibly before I even got on the boat to Stornoway.

Thankfully, there is one ferry off South Uist before Monday, and that’s going late this evening (Saturday). I’ll be on it. But it’s not going to Mallaig, but to Oban (quite a lot further south, and chopping a couple of days off the ride). So I’ll miss Harry Potter. Hopefully, this won’t ruin my life too much, and things will become a bit more predictable and controlled when I’m back on the mainland, but we’ll have to wait and see…