Another long gap between posts.

Who’d have thought that Switzerland, and then Germany, would produce such formidable technical challenges?  No electricity in one, and virtually no internet in the other…

I should’ve known things were going to get tricky.  Just a few kilometres out of Albertville on Sunday, the road towards Chamonix was closed.  This was, on the face of it, a bad thing.

It meant that I missed my reconnaissance of the Tour de France mountain time trial, which I’d been intending to ride (in reverse) on the way towards the Swiss border, as well as the Col du Forclaz on the border.  A swift re-routing was required.  This was a pain.

On the other hand, the only alternative was up a long, and very pretty, cycle route to (and along) Lake Annecy:

Which was the first in a series of spectacular lakes.

And after one more (low) alpine pass, I was done with the French Alps, and parked up near the Swiss border.  Ready to have a proper look at the country, after my 90-minute preview a couple of weeks ago.

Like several Swiss towns which sit on the border with other countries, Geneva has ‘foreign’ suburbs.  So it was only a few minutes on the bike from my overnight stop in France to the centre of town, and Lake Geneva: 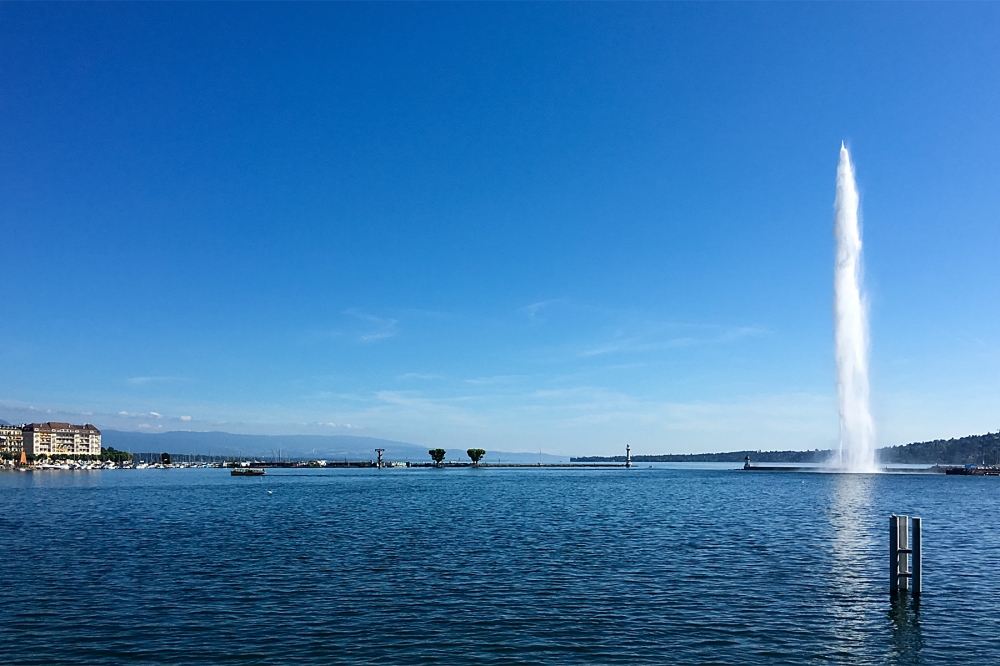 The first thing you notice (as a cyclist) in Switzerland is the proliferation of bike lanes.  You can roll into pretty much any town on marked routes.  Often, these are segregated, although a lot are just British-style paint on the road, too.  In either case, it makes a nice change from having to fight for space on crowded streets.

The second thing you notice is how hideously expensive everything is.  This is obviously exacerbated for me by the inevitable economic damage done by the ‘Brexit’ vote – thanks for the extra 15% on everything, Britain!  But Switzerland is outrageously expensive anyway.

For example, my campsite at Lausanne was in a beautiful lakeside location (above).  But US $24 for one person and a tent is not exactly as economical as camping should be.  A fizzy drink and a bottle of water costs US $6 in the average cafe or petrol station.  A ‘value’ meal in a well-known burger chain runs to US $13, (and those prices are against a pretty strong US dollar).  So you know you just need to cross the country as quickly as possible.  To get somewhere (anywhere!) where you can survive on less than a banker’s salary.

While I was out of the Alps, I still had to cross another range of big hills (the Jura) before reaching Basel, and the Rhine valley.  At first glance on the map, the Jura look quite intimidating; ridge after ridge after ridge of fairly high, steep hills barring the way north. 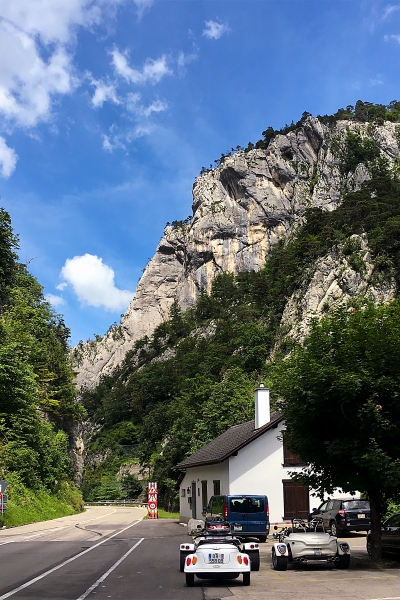 But a little more planning reveals that there are little gorges between the valleys, so you actually ride all the way from Neuchatel to Basel with only one major climb.  Despite fairly often heading into apparently closed valleys with dismayingly steep sides, there’s always a little ‘doorway’ through which you can escape (like the one above).

Which made for a fairly relaxing run down from the lakes, and through the hills on Wednesday and Thursday.

The city of Basel is another Swiss border city.  I’d been flipping between French and German-speaking Switzerland every few kilometres from Neuchatel, and Basel sits on the border of three countries, with France and Germany both sitting across the city limits to the north.

Given that this triple border lies on the Rhine, which is one of Europe’s great rivers, I was hoping to get a picture of the wide river, with all three countries in one photo.  Unfortunately (certainly when heading to Germany), all you see is warehouses and industrial buildings before the – empty – border post.  At which point, you enter Germany, while your phone lights up with a ‘Welcome to France’ message. 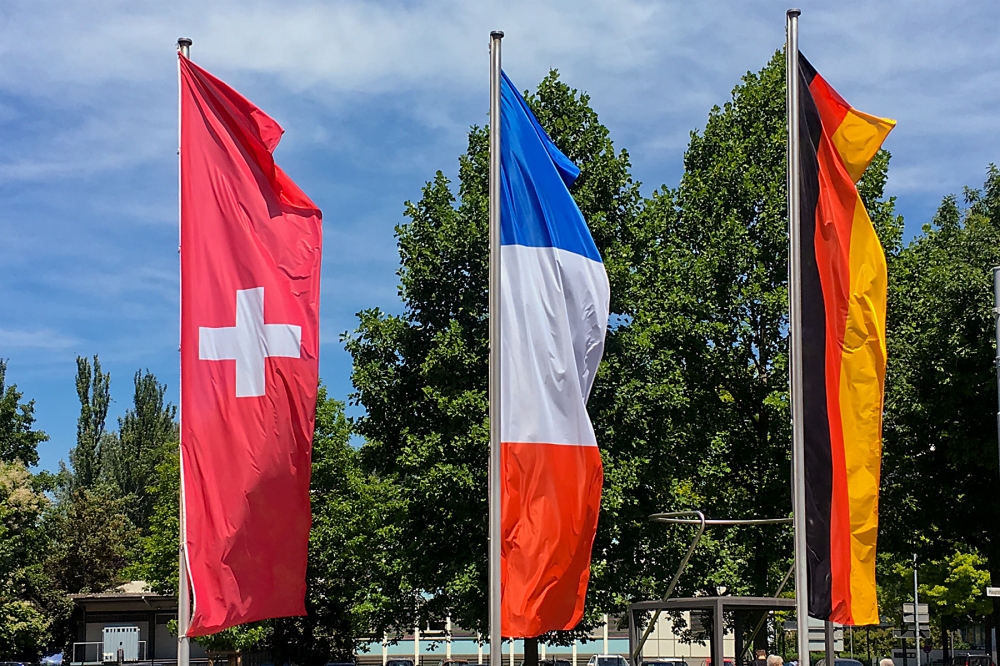 Thankfully, there are some flags to make the ‘triple border’ point without the panoramic picture or the inaccurate text messages.

And so, yesterday (Thursday) afternoon, I rolled along the flat Rhine valley in yet another country; Germany.  I can’t say much about it yet, as the area’s heavily forested (it’s on the edge of the Black Forest, in fact).

So it’s short on stunning views so far.  I do know that it’s much cheaper than Switzerland, which is good.  And that staying in a small spa-town with ‘lots of old people’ (as I had it described to me) is not a recipe for a decent internet connection.

It was also the wrong choice of country.  Had I chosen the French side of the river, I’d have watched a glorious footballing victory last night, instead of a bitter footballing disappointment.

Still, I’ll hopefully find out more about Germany as I go along.  In the meanwhile, the weather is good, the roads are flat, and I have exactly two weeks left to enjoy my ride around the world (I’m expecting to get into Greenwich on 22nd July, barring any problems).

Oh, and I received the photo I mentioned last time, which is nice.  For those who haven’t seen it on Facebook yet, the picture below is me and the bike taking on the Col du Glandon last Wednesday. 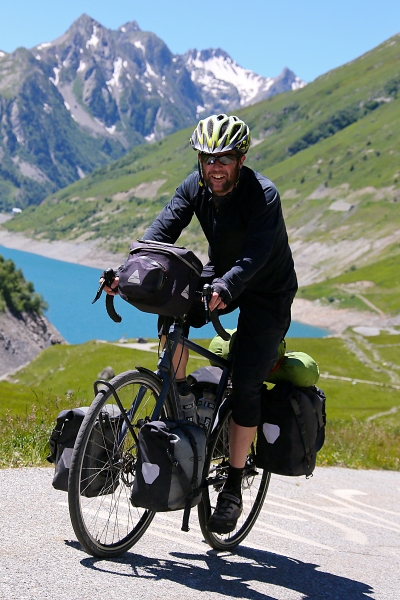 Not quite in the style of the Tour riders (including Steve Cummings, who just won today’s stage up the Col d’Aspin in the Pyrenees), but a professional photographer certainly makes it look easier than it was…

More from the heart of Europe next time (hopefully a bit quicker, and with fewer technical problems).

Note that most ‘universal’ adaptors for UK electrical devices do not fit modern Swiss electric sockets.  The socket design prevents anything other than narrow, two-pin European plugs from fitting.  There are a few old sockets around (I managed to find one in the whole country), which will work, but it makes sense to check whether your adaptor will fit Swiss sockets before you get there.

Otherwise, you might not be able to update your blog for a week 😉