I’m not sure that I ever thought that I’d find my cycling paradise in Macedonia.  I certainly didn’t expect to find it in Albania.

But after two superb days of stunning mountains, gorges, lakes and rivers, I’m beginning to think that this might be it.  At least, it might be if the roads weren’t quite so ropey, and the driving standards quite so poor…

There wasn’t much of a clue as I left Skopje on Saturday.  Some reasonable scenery, and reasonably flat roads, but nothing to indicate that I’d spend most of the following days grinning like a crazy person.

And Sunday began with an 800 vertical-metre climb into Mavrovo National Park, pushed up against Macedonia’s border with Albania.  I reached the top feeling fairly hot, and slightly tired.  A coffee by Lake Mavrovo perked me up a little bit.  And then it was time to head for the border town of Debar. 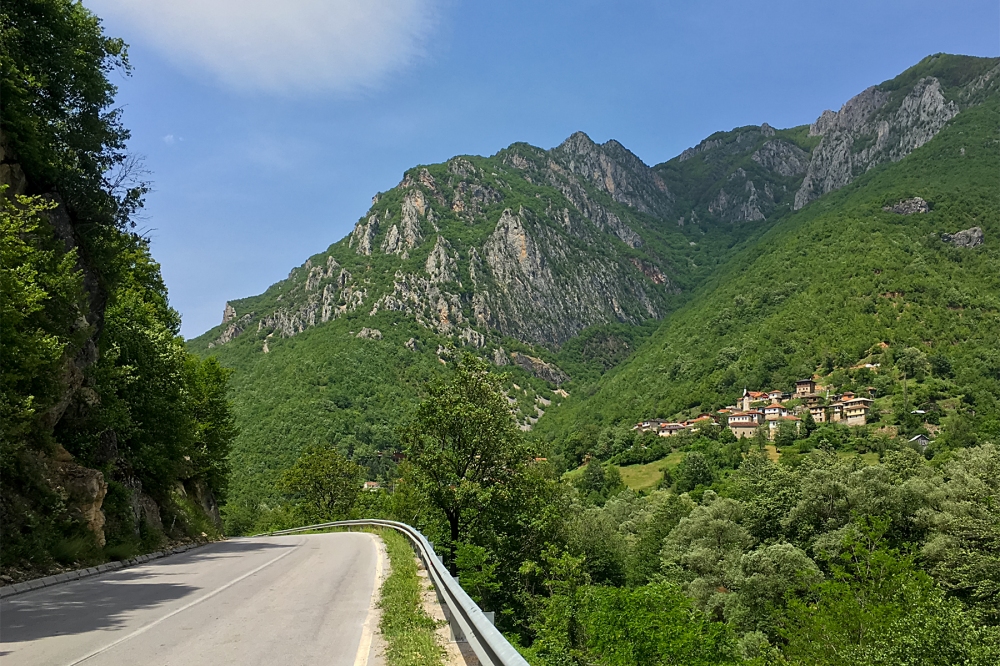 I’d kind of registered that there was a lot of downhill from the lake.  But I didn’t realise that it was around fifteen miles of downhill.  Down a magical gorge road (the two pics above).  Magical because the road kept falling as the mountains on either side got higher.  And because every twist and turn just revealed another spectacular view.

It was actually a bit dangerous, as my head was constantly swivelling to catch the next snow-capped peak, or overhanging cliff, or village clinging improbably to the side of the valley.  I’d normally have been paying a little more attention to the next bend, or the next vehicle charging towards me on the wrong side of the road.

It was a stunning piece of road.  And when I finally hit the bottom at Lake Debar (below), I was so elated that I didn’t even mind the nasty, 20% ramp before Debar town.  I barely even noticed it.  But I did feel sad to be on the verge of leaving Macedonia so soon.

Debar is typical of western Macedonia.  All the way from Skopje, you can feel the Slavic and Orthodox Christian influences weakening as you approach re-entry into the Muslim world at the Albanian border.  Once you get to Debar, you can really feel how close you are; I noticed several mosques, but no churches.  And the statue in the town park was of the great Albanian hero, Skanderbeg.

This morning (Monday), it was just a five kilometre ride to the border.  Another super-relaxed crossing, although the Albanians do still stamp your passport, and I was rolling into country number 27 (they really clock up quickly round here).

Albania proved fairly pretty, but irritatingly uphill and headwindy until lunchtime.  And then it all changed again. 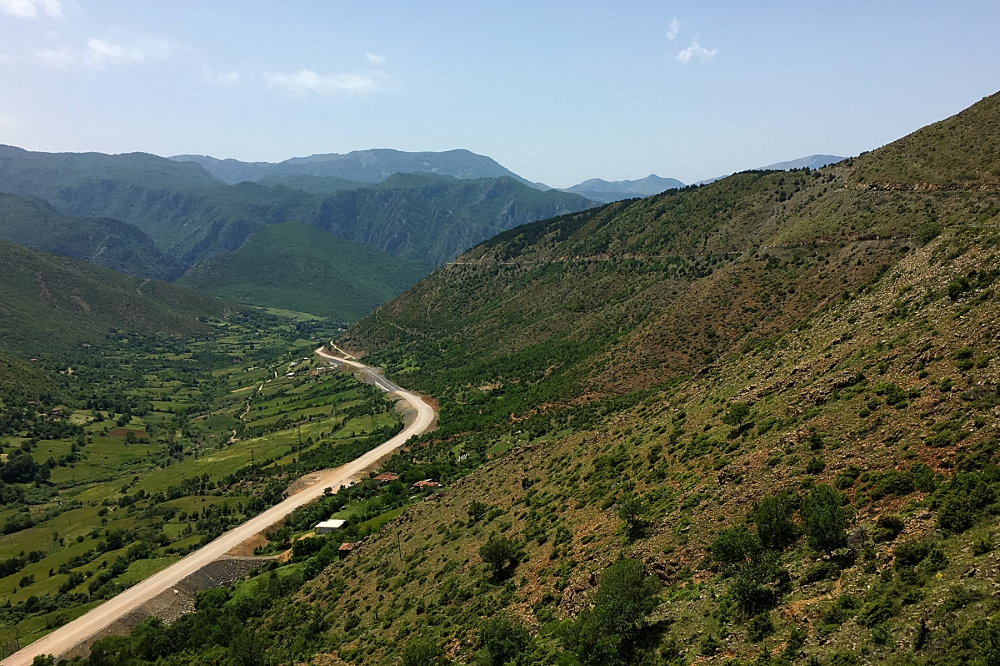 For the second day in a row, I found myself on an almost infinite downhill.  There’s a new road in the bottom of the valley (above), which is not finished yet, so the current road twists and turns its way along the valley side.  You can just about see it.  There’s very little in the way of barriers or other safety equipment here, so the ride is a little more exhilarating than it strictly needs to be.  Which is fun, as long as your brakes keep working.

By the time I’d worked my way down the upper slopes, and round the corner to the right, I could actually smell the discs heating up.  This is a first for me on a bike (possibly indicative that Albanian driving habits are contagious), and I was relieved to find that there was no scary brake-fade as a result.  Because I was about the hit the really fun part.

It’s always hard to appreciate on photos, but there’s still quite a long way left to drop on the picture above.  Another five or so miles of passing trucks, bouncing flies off my teeth, leaning through hairpin bends, and slithering a little bit on the occasional gravel patch.  And all the time with this magnificent landscape all around.

If I’d smiled any wider, I’m pretty sure my face would have split.  And I’d have started ingesting unacceptable amounts of airborne insects.

The last few miles to Burrel were flat and pleasant farmland, along the valley bottom.  With the exception of another steep spike up into the town itself.  Just like yesterday, I didn’t mind the hill at the end at all.  I even had a go at chasing a local cyclist (on his carbon fibre road bike, complete with race number) up the incline.  I’m pretty sure he let me catch him, but he did a great job of looking impressed.  A fantastic end to a brilliant couple of days’ riding.

And, as the sun fell over the hills at Burrel (above), and a well-deserved steak rounded off a near-perfect day, I realised that I’m already halfway across Albania (it’s not exactly the fattest country).

It seems almost a shame to be progressing so quickly.  People here are insanely friendly (roadside high fives, and even slaps on the back, are common), and the riding is just great.