I’m feeling a bit warm.  The hard-pack trail is kicking up dust.  I’ve downed a couple of litres of water, but still feel thirsty.  The sun is scorching my back as I trundle along the old railway path.  I’ve got sweat in my eyes.  It’s well over 80 degrees F.  And it’s eight-thirty in the morning.

I promised I wouldn’t moan about the temperature or the humidity.  But they finally cracked me today.  I guess you can only ignore heat warnings for so long before they catch up with you.  I got ten miles down the road this morning, stopped for breakfast, and to help a lady with a flat tyre, which let the temperature rise some more.  Made it another five miles before I realised that another sweltering day – it was 100F by eleven-thirty – was going to do more harm than good, and bailed out into an air-conditioned motel.  At least I get to recharge my batteries (both literally and metaphorically) and wash my socks (just literally, I think).

I’ve made decent distance in the last few days, despite shade temperatures which have been consistently in the high 90s and low 100s.  I’ve no idea what the temperatures in the sun on the road were.  And I’ve crossed the Mississippi, which puts me at least into the west of the mid-west, if not the West itself. 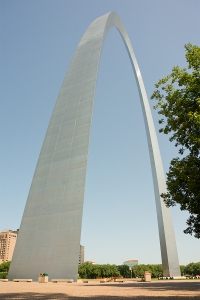 From the famous arch in St Louis onwards, the map starts to fill with those place names that are so familiar from old cowboy films and TV; Kansas City, Dodge City, Wichita, etc, etc.  You cross the old Route 66.  The whole place starts to smell a bit more of adventure; Daniel Boone lived around here (as well as almost everywhere else in the US, it seems), and Lewis and Clark set off west from here to explore for a route to the Pacific.

I rode through St Louis on Sunday.  Partly because there’s minimum traffic then, and partly because I had half an eye on what might or might not kick-off  in Ferguson, which is one of the northern suburbs.  Nothing to worry about for me, as it turns out; as usual with those sort of things, trouble tends to be localised and easily avoided.

I spoke to two cyclists with very different views of the situation.  Unsurprisingly, one was black and from the northern part of town while the other was white and from the (very) wealthy western suburbs.  It’s obviously a very polarising situation, and feels like quite a divided city; from my own view riding through, the obvious wealth differential between their two home areas was stark, and their views on the whole Ferguson crisis were diametrically opposed.  Hope it all settles out, but fear it may take a while…

Now (or at least until my cowardly retreat to the motel) I’m following the Katy Trail up the Missouri River valley.  The Missouri joins the Mississippi at St Louis, and is a fairly impressive river in itself.

It was up this river that the Lewis and Clark expedition began, so I’m once again following in history’s footsteps.  Though I’m pretty sure they weren’t tempted by bunking off to an air-conditioned box.  Tomorrow, I’ll try to rediscover my backbone and get back out there; on the plus side, there might be a break in the weather in a couple of days.  But I’m not (all that) stupid; weather like this needs to be respected, and the daily mileage may be taking a dip until things cool off.  Assuming they ever do…