Which makes it sound a little bit like I’ve not gone very far.  Just crossing the river would’ve done it, wouldn’t it? 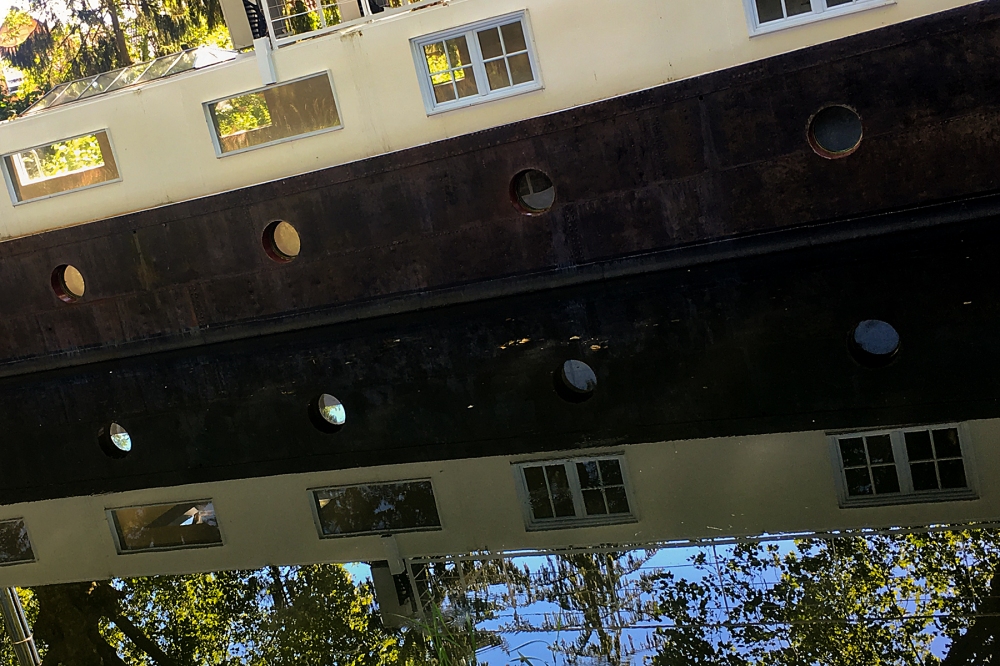 The Rhine is like a motorway between northern and southern Europe.  Traditionally, it’s been freight that has made the journey, either on the river itself, or on the canals which flank it (pic above).

Today, it seems to be just as much a ‘motorway’ for cyclists, with a surfeit of choices of waymarked route; do you want to be on the road, or car free?  By the canal, or by the river?  Through the towns, or bypassing them?

The only thing you don’t get a choice about is the terrain.  It’s either flat, pan flat, or billiard-table flat.  Which, after the drama of the Alps, and the hills, lakes and gorges of Switzerland, was just a bit, well…  Boring, I suppose.  Good for making distance, but no expansive views, and the sort of area where a headwind can make your day a misery.

I opted for the canals for the first couple of days.  No navigational issues; you just follow the (generally) well-surfaced paths.  Fairly straight lines, too, so you’re not doing lots of extra miles like you do on the roads.

And the canals here take you straight into the town centres, like Strasbourg (above).  A nice, straight, traffic free route into the city centre.  And straight out of the other side.  Like many canal paths, it’s not necessarily the quickest riding, as you avoid tree roots, kids, dogs and the elderly.  But the lack of traffic lights (and traffic) make it just as fast overall as the road, and without any of the stress.

Still, as I trundled further along the canal path to the north of Strasbourg (above), I’d had enough of the flat lands.  It was time to cut away from the canals, and to give my legs a little bit of work to do.

The thing that’s very obvious in Alsace is that it used to be part of Germany.  It was given to France after the First World War, which is a reminder that I’m quickly heading towards some of the areas most affected by that horrible conflict just a century ago.

And as I headed into the rolling hills towards Lorraine, it was easy to forget I was in France at all.  The villages all look German, and the names on the signposts all look like this:

Of course, you never forget completely.  Whether it’s having to speak French to people, or the amazing (in this 24/7 age) habit of closing everything for a two hour lunch break, you’re always reminded that this is France.

And France had one more little surprise for me.  I rode up a fairly large hill to discover that I’d just bagged my last French col (below).  It says something about the size of the hills around here that this is considered to be a ‘Col’ at just 350 metres high. 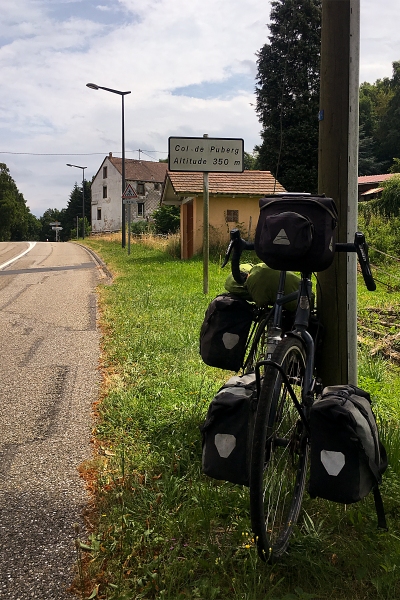 And it says something about how much my climbing has improved in the last few weeks that I cruised up it in the big ring, without even really noticing.  I’d have struggled to do that without the bags before I left on the trip in 2014.  There’s not much doubt that loaded climbing makes you a stronger bike rider.

I said ‘one last surprise’, didn’t I?  Well, I got another this morning.  After putting it off (arguably) far too long, I finally got my first haircut since Kazakhstan.  Despite being sure that I asked the guy to cut it short, but not too short, I’ve ended up with the hair of an eighteen-year-old army recruit.

Which is something to remember France by as I head back into Germany tomorrow (two years to the day since I set off from London), and towards Luxembourg and Belgium.  I just hope it grows out a bit before I get home; it scares me a little every time I catch sight of my reflection…