You can tell you’re back in Europe when the weather decides to play a large (and largely unwanted) role in your touring.

I was pretty sure, heading west from Alexandroupoli on Thursday, that I’d be able to update you on southern Bulgaria today.  The weather was nice, the road was good, and the hills weren’t too big and threatening: 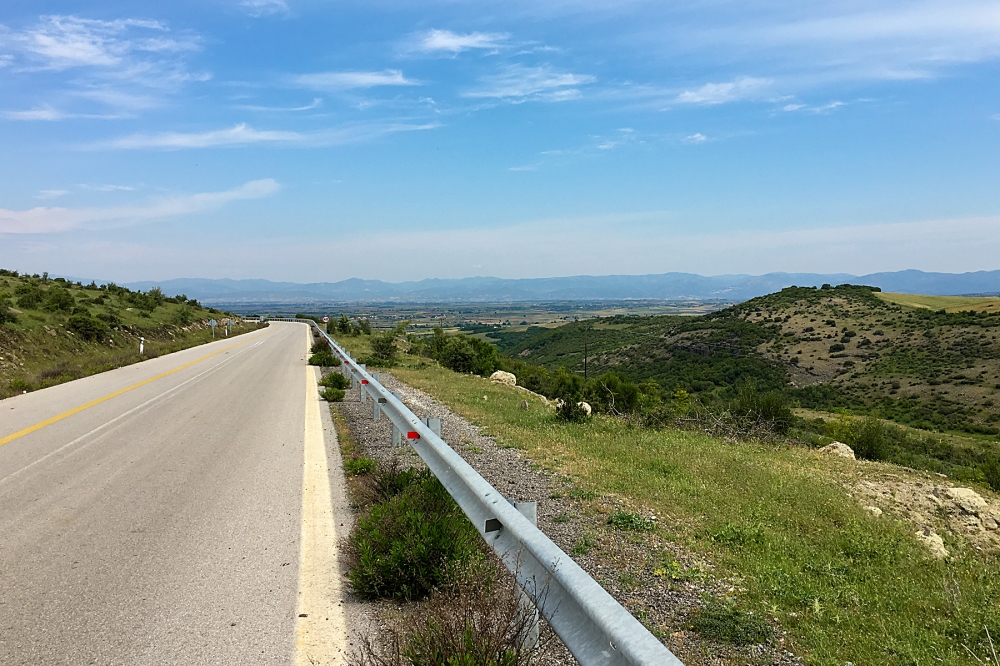 Xanthi on Thursday, then Drama on Friday, and Bulgaria on Saturday.  Not even stupidly long days.  Should have been easy.

And Thursday was fine, with the exception of a nagging headwind.  More of a head-breeze, really, so not a major problem.  The sun was out, the birds were singing (there seem to be a lot more birds here than in Turkey, for some reason), and all was well.

I even found that ultimate mark of civilisation, a Lidl supermarket, when I got to Xanthi.  It was probably the busiest shop I’ve seen in Greece so far, which may be an indication that the Greeks’ economic woes are not yet all in the past.

My usual weather check that evening was where things started to go a bit sideways.  A huge blob of slow-moving rain was due to cover pretty much the whole of northern Greece (and southern Bulgaria and Macedonia) for about 36 hours from yesterday afternoon (Friday).

This was unfortunate.  You’ll be aware of my enthusiasm for getting completely soaked from previous posts.  And this blob of rain had all manner of online weather warnings attached to it, so it looked like the internet didn’t think it was just going to fade away, either. 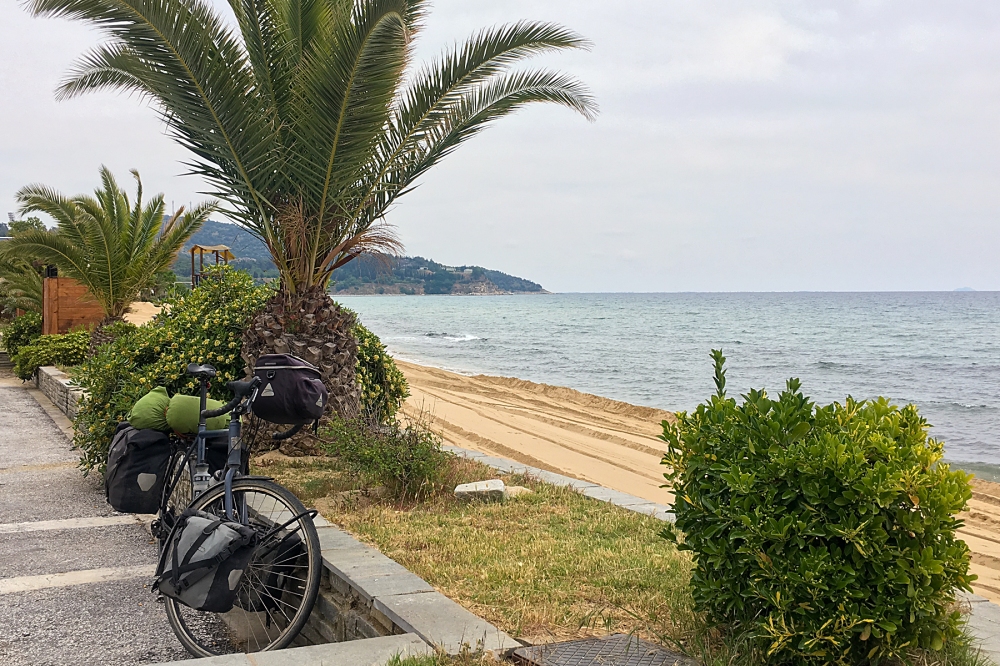 But you never know with weather forecasts.  It’s not like they’re never wrong, is it?  And this is Greece.  And it’s almost summer.  Surely it couldn’t rain that much?

So, proceeding according to plan, I twiddled away from Xanthi towards Drama.  But it was already clouding up by the time I hit the coast at the Beach of the Giant Pineapples (above).  It’s not really called that, by the way.  And I’m pretty sure it’s actually some sort of palm… 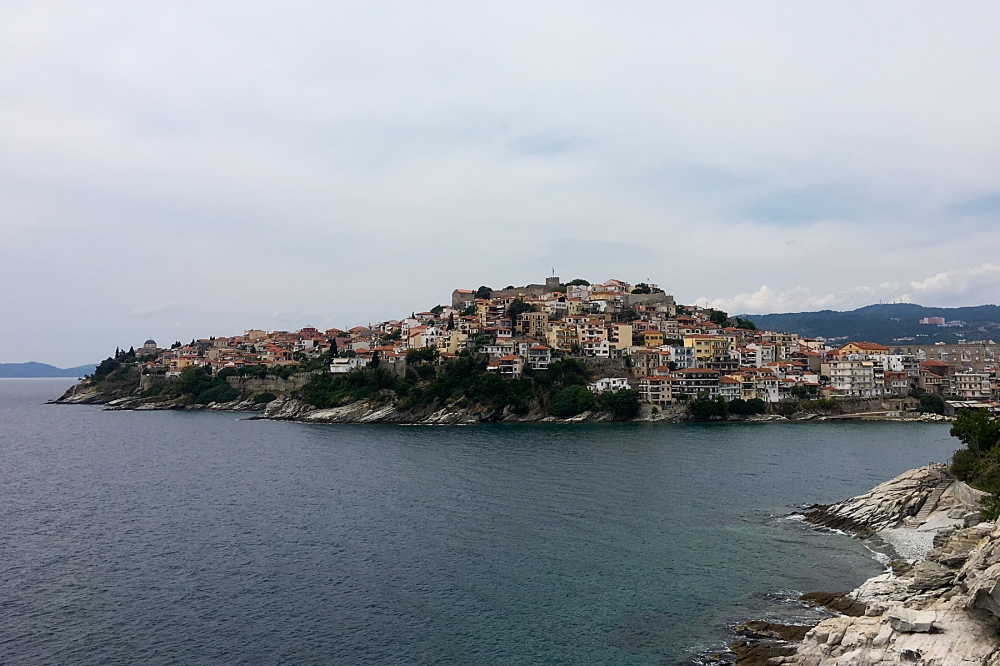 I decided not to stop in Kavala, despite its impressive old town, complete with ancient castle and aqueduct (above – you might have to squint a bit to see the acqueduct).

I’d get as close as I could to Drama before the rain came.  And hope that I didn’t get stuck in no-man’s-land between the two big towns.  So, pausing only to have a quick look at the monastery at the top of the hill out of Kavala, I ploughed on.

And duly got stuck in no-man’s-land.

Last night was a bit damp.  Today has been wet in an English summer sort of way – pouring with rain one minute, drizzling the next.  Miserable.  And not entirely helped by being stuck in the sort of village where a car driving down the main street would be a local talking point for weeks afterwards.

It’s my own fault.  In retrospect, I could have got to Drama in the dry quite easily, but it just didn’t feel that way at the time. 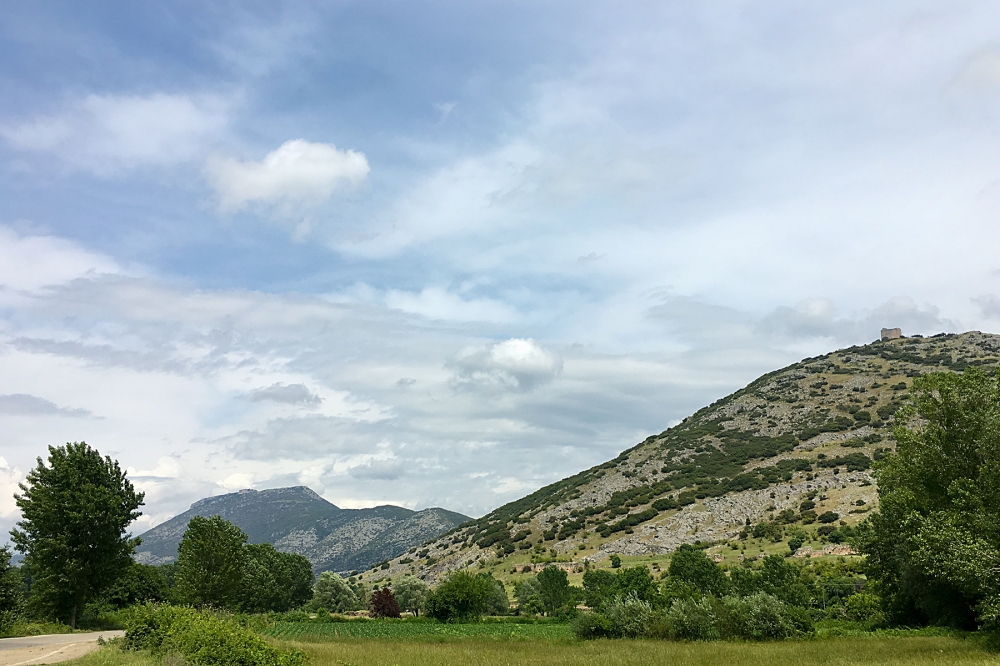 If I’d been here a thousand or two years ago, things would have been different.  Where now there are just a couple of villages, separated by the fairly large hill above, there was once a Greek / Roman city called Phillipi (roughly; the spellings, and even the name, have not been particularly consistent over the years).

It was on the Via Egnatia, which was the Roman ‘motorway’ between the western and eastern parts of the empire.  And it was, by all accounts, a busy place; an administrative centre and a military site.  It was also, apparently, the first place in Europe where St Paul started spreading Christianity to the Romans.  Then it was abandoned.  Pretty thoroughly.  And used by the Ottomans as a quarry, according to Wikipedia.

So an interesting past, and a desolate and rain-soaked present.  I do hope that’s not some sort of metaphor for the rest of my journey!

It shouldn’t be.  The bike’s had a clean and fettle today, so I’ll be ready to head on to Bulgaria whenever the weather clears.  Which will hopefully be tomorrow.

If there are no more dramas.  Except for Drama, finally…