I was pretty tired by the time I got into Samarkand last night (Sunday).

Well over 300 kilometres from Tashkent in three days, through rain, over hills, and into headwinds.  It was fairly hard on the bike.

I’m not sure I’d want to try it on a camel.  Or on foot.  I’ve been on some very long, straight roads, which left me plenty of time to imagine travelling this route seven or eight hundred years ago.

But people really did travel this route on their camels and their feet for hundreds (maybe thousands) of years, bringing silk and spices from the far-away Orient to the edge of Europe.  And they left some quite impressive monuments behind them.

This is right next-door to my guesthouse here:

Which is undoubtedly a good landmark to finish the first section of the Silk Road.

But it didn’t start well on Friday.  After all the rain during my stay in Tashkent, the Internet said that Friday was going to be overcast and cold.  But dry.  And it was all those things as I started off.

Two hours later, I was clear of town, and well on my way to the middle of nowhere, when the rain began.  It didn’t stop all day.  And so, my first day riding in Uzbekistan degenerated into a sorry, soggy, shivering mess: 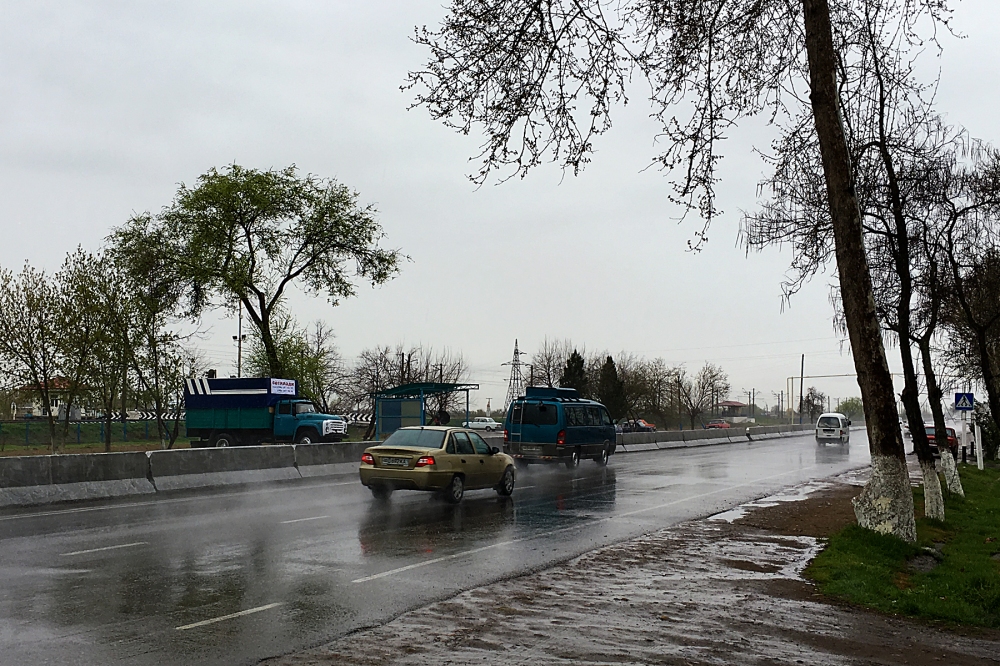 Thankfully (and partly due to gracefully declining the first of two wedding invitations I’ve had on the road already), I made it to Gulistan just before hypothermia set in.

I knew there were a couple of hotels there, but I couldn’t find them (the signposting here is generally awful).  In the end, I asked a policeman.  Although this is generally accepted behaviour at home, the general word on cops in former Soviet countries is to leave them well alone.  But I didn’t have a choice.  I needed to get inside, and quickly.

Either because of my pathetic state, or because he was just a nice bloke, I ended up following a police car through the streets for the last two kilometres of the day.  The third hotel we went to had space, and I was absurdly grateful to get under a hot shower, knock back a steaming pot of tea, and collapse onto a sofa for a while.

I was also quite relieved that the rain drifted off towards the mountains during the night, and hasn’t been back since.

What with the random wedding invitations and helpful policemen, Uzbekistan’s character is starting to reveal itself.  Friendliness definitely seems to be a strong trait.  Including hugs from total strangers.  It’s definitely got the former Soviet feel.  I get especially strong flashbacks from people with vodka on their breath before lunchtime, and gold teeth.  Though huge wall murals like the one above are also good reminders, albeit with no hammers or sickles any more.

But as the Registon in Samarkand (below) and the many other bits of spectacular Islamic architecture remind you, this is also a country with a strong Muslim culture.

And I think it’s probably the Muslim tradition of hospitality that’s leading to the invitations and general helpfulness that I’ve encountered so far here.  It’s really nice, although there is the slight drawback of ending up in a twenty minute conversation every time I stop by the roadside.  Which is definitely slowing my average speed a little.

And it’s also Navro’z (Uzbek spelling, there are many variations) at the moment, which means that Samarkand today was like a ghost town as everyone (including the restaurant owners and shopkeepers) had a day off.

Still, it’s definitely so far, so good in Uzbekistan.  The roads are reasonable (mostly).  The driving, which is often slated by those coming on bikes from Europe, is so much better than in India that it seems really, really good.  And yet again, people (as they seem to be almost everywhere) are being marvellous.

Back on the road tomorrow for another near-300 kilometres towards Bukhara, the second of the major Silk Road cities.  That should be another three days.  Assuming I can restrain myself from joining in the three-country, vodka-fuelled political debate that’s going on in the guesthouse courtyard at the moment.  I’m tempted.  But I’m just not convinced that strong alcohol is necessarily the best preparation for more long days on the Silk Road…