Due to the whims of international flights (primarily down to the fact that there aren’t many out of Myanmar) and pricing, I find myself briefly in Bangkok this evening, en route for Kolkata (Calcutta) in India tomorrow.

I’m a bit sad to be finished with Myanmar, to be honest.  Dodgy road surfaces apart, it was a really interesting place, with truly lovely inhabitants.  And I never did work out some of the odder aspects of the country.  Especially what the point of Nay Pyi Taw is…

Still, as I rolled out of beautiful Bagan on Thursday, beginning the last hundred miles or so of the long road to Mandalay, there were already a few thoughts running ahead to India, and what I’ll find there.  I think this was partly influenced by the landscape, which had got much dryer and more scrubby than it was in the south of Myanmar.  More like what I (probably inaccurately) imagine India will look like.

I was also slightly haunted by the nagging feeling that I should be riding to India, rather than flying.  The German guys I met in Vietnam had made it through the high mountains of India’s far east, and entered Myanmar overland.  I should really be doing the same in reverse, shouldn’t I?

I still feel that I might be missing out a little, but there are (I hope) fairly sound reasons behind the decision to fly for a little bit.  The north-eastern states of India have ongoing issues with Maoist insurgents (how old-school is that?), and the UK Foreign Office, probably over-cautiously, advises against all but essential travel there.

That wouldn’t necessarily be a problem in itself (I’m fairly sure the FCO would advise everyone just to stay at home if it could), but it tends to affect the willingness of travel insurance to cover you.  And, having required repatriation to the UK not so long ago, I’m not sure I’ve got the appetite for risk required to enter a low-level war zone uninsured.

Plus, there was a fairly major earthquake just a few weeks ago, centred on Imphal, the first big town across the border.  So after a fair bit of umm-ing and ah-ing on the way up Myanmar, the short hop to Kolkata seemed the better option.

Possibly a little cowardly, but there you go…

In any case, I had to finish Myanmar first.  The road toward Mandalay proved to be decently surfaced and full of cycle tourists.  Well, it had three other cycle tourists on it while I was there, and that’s pretty much a crowd.  On my very last day’s riding in the country, I met Alastair and Rachel (from London) in the morning, having stayed in the same hotel, and then I caught up with a French girl on her second-ever day of touring later in the day.

Whatever Kipling wrote about the ‘Road to Mandalay’ that made it so famous, it’s certainly true that (on Friday at least) the road to Mandalay is where the touring cyclists play.

Mandalay itself has the great benefit (especially after the confusing nothingness of Nay Pyi Taw) of being a proper city.  ‘Bustling’ would probably be the appropriate adjective.

It also has the unparalleled tourist attraction of the best precariously-balancing-keepy-uppy-lady (as I believe the name of her act translates) in the world: 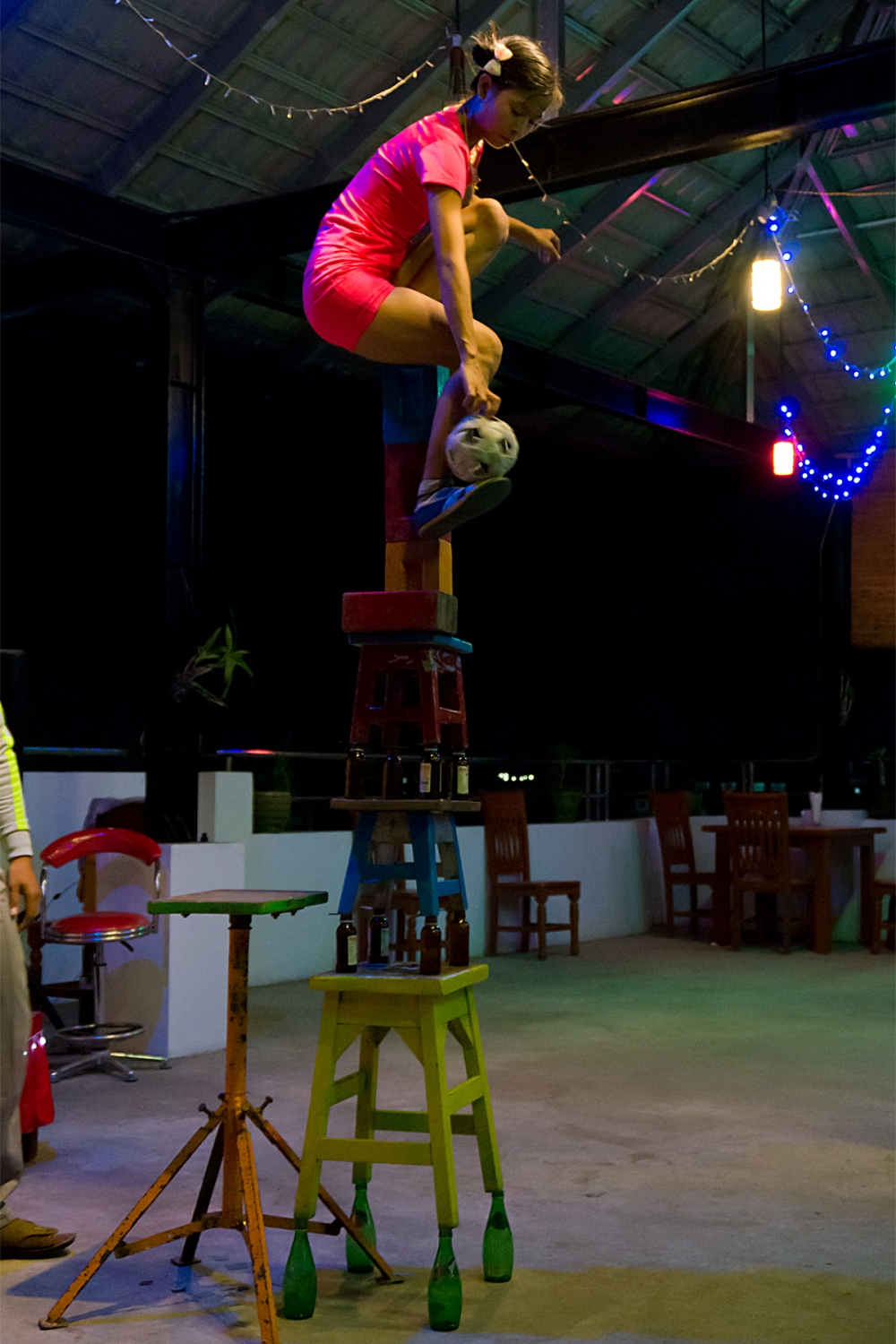 Through a remarkable coincidence, I ended up watching the stool-climbing and bamboo-football-juggling display with Alastair and Rachel, who’d (entirely independently) turned up to stay at the same hotel as me again.  Even more remarkably, it turned out we were on the same flight out today.  So I got to see people over a longer-than two-day period for the first time since Vietnam.  And, even better, we got to irritate the airline staff with three bikes rather than just the one.

But I did manage a couple of exciting round-the-world milestones on the way to Mandalay: 11,000 miles for the overall trip so far, and my vertical climb finally reached the equivalent of 9 times up Mount Everest from sea level.  Phew!

Oh, and if you’ve ever wondered what the end of the road to Mandalay looks like, it looks like this:

A massive, square red fortress, surrounded by a moat.  I reckon it’s over a mile on each side, so massive is definitely the right word for it.

It’s well worth getting to.  And hopefully, India will be too.  I’ll find out soon enough…