It’s summer again.  After the cool, damp and beautiful interlude of New Zealand, I’ve landed in Sydney.  Back into high 20s – early 30s C (though at least I’ve missed the 40C temperatures of a couple of weeks ago).  Back into humidity.  And back into thunderstorm season.  It feels a bit like a flashback to the American mid-west.  Though it looks a little different.  And just like NZ, there are pies here.

The last few days to Christchurch were fairly uneventful.  I found probably the busiest and flattest road in the country, and ploughed along it for a couple of hundred kms.  Apart from a few raindrops and a few more brushes (not quite literally, thankfully) with NZ drivers, nothing too exciting occurred.

I did meet yet another cyclist who put my trip in perspective; a Frenchman in (I guess) his sixties, who’s been on the road for five years, across four continents.  Pretty remarkable.  More surprising, is that he’s planning to stop in a few months.  I guess that’ll be a difficult transition for him; I worry a bit about what I’m going to do when I finish, so it’s hard to imagine what it’d be like after five-plus years.

Christchurch is still a city in transition, rebuilding itself after severe earthquake damage.  It feels a bit odd, as the city centre is essentially a massive building site, with the heavily damaged cathedral surrounded by empty lots, diggers and cranes.  A few hundred metres away, there’s a temporary shopping centre built out of shipping containers; an ingenious solution to the devastation caused to the city. 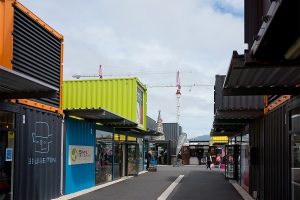 And then another few hundred metres takes you to the older area of town, which looks almost quintessentially English.  There are a bunch of Victorian buildings, which seem to have escaped the earthquake damage almost completely (along with most of the suburbs).  There’s the River Avon running through parkland, and there are punts on the river, just as you see at Oxford or Cambridge.  The contrast with the central district is astonishing.  Hopefully, as time and rebuilding go on, the city will reintegrate itself, but I suspect it’ll be a few years still until it all fits together seamlessly again.

On Sunday, I was outside Christchurch airport trying to pack the Beast into a slightly-too-small box, which was continually trying to blow away in the blustery wind.  Eventually, I managed to squeeze it in, and only had to pay 90% of the cost of my own ticket to get it on the plane.  I wouldn’t necessarily recommend flying with a bike as a stress-free experience.

In the end, the Beast did get on the plane, and the plane performed as expected.  We arrived in Australia on Sunday evening, stepping out of the air-conditioned airport into the muggy summer night.  A day spent rebuilding the bike on Monday, as well as patching a damaged pannier (exploded mosquito repellent, plus Ortlieb pannier, equals chemically-melted plastic – ouch!).

And this morning (Tuesday), I’ll be on the road in country number nine.  Back on with the sunscreen and shorts for a while, though the rain jacket looks like it’ll still be useful, too, on occasions.  More from Oz soon, as I begin the long, long trundle to Darwin…