Four long-ish days to Christchurch, two fairly hilly, two fairly flat.  And a flight to Sydney on Sunday evening.  I did the sums.  It was only Monday morning.  After my escape from the rain on the west coast, I reckoned I deserved a day off at Wanaka.  It was a bit of a risk; if the weather wasn’t better this side of the mountains, I might end up needing a train or a bus to Christchurch.

I might still need a train or bus, as there are still a fair few miles to go from here in Geraldine.  But the weather’s been better.  Mostly.  I’ve ridden along canals in the sky.  And Wanaka’s really pretty in the sunshine.

The shortest way to Christchurch was via the lakes, just the other side of Aoraki / Mount Cook from Fox Glacier, where I spent so much time last week.  First, there was the small matter of dragging the Beast and the bags up Lindis Pass, to my highest point in New Zealand at over 900m.  As you can see, the weather remained dire, but I bravely soldiered on. 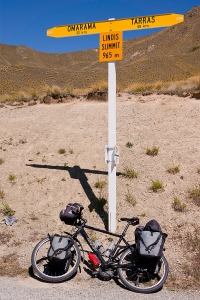 With Lindis pass behind me, the way to the lakes was open.  First Pukaki (very pretty, despite a name which must imply the opposite in pretty much any language), then Tekapo.  And just before Pukaki, I hit the first of the canals in the sky.

The canals run across many kilometres of the alpine foothills, generating hydro-power from the meltwater lakes, and providing a home for salmon farms.  I don’t know how many canals there are in the world at over 750m altitude, but I’m guessing not that many.  Between the lakes, the road along the canal provides a nice traffic-free route through the hills for pedestrians and cyclists.

I met an English couple on bikes, coming the other way as I skirted Pukaki.  I asked them how the trail was.  “Mainly tarmac, bit of gravel.  Flat as a pancake”, was the gist of the reply.  Apparently, they had both forgotten that they had just plunged down a 200 vertical metre, 10% gradient hill.  Much fruity language was deployed in their (now distant) direction, as I struggled up said hill, just a few minutes later.  Grrr… 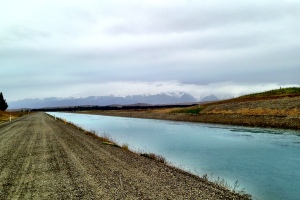 Still, once up on the trail, it was flat (or, at least, so gently uphill that you barely notice), and with a beautiful backdrop of snow-capped mountains.  And no traffic, which made for a drop in stress levels.  Until I arrived in Lake Tekapo village in the drizzle, only to discover that it was pretty much entirely booked out by hordes of Chinese tourists.

Having bravely borne a good, oh, 15 minutes of stress trying to find somewhere to rest my tired head, I finally collapsed into a super-grotty room.  And while wandering out to get some food a little later, I understood why the place is such a busy stop on the tourist trail.  It’s really stunning as the sun goes down. 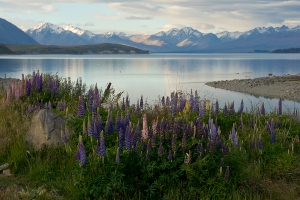 From Tekapo, it was an easy 90-ish km (55 miles) downhill to Geraldine.  On paper.  The kiwi weather, with its typical capriciousness, decided otherwise, as the wind flipped through a full 180 degrees in the time it took me to drink a coffee.  A decent tailwind, which had finally pushed me through the 40mph (64 kph) barrier just a few minutes earlier (I’ve been ludicrously close to the mark several times on the trip, but a tailwind was clearly the missing ingredient), suddenly became a fairly evil headwind, which made the last half of today’s ride a little tiresome.

Still, I’ve managed three consecutive days on the road without getting more than slightly wet.  That’s a first since I arrived on South Island.  I’ve also charged through the 9000km mark.  And there’s a chance that I might get the tailwind back for the long run to Christchurch tomorrow (Friday).

I’ll believe that when I see it…