Turns out it’s the Pacific Ocean.

Three months and two days after leaving London, I seem to have emulated the Beatles, the Rolling Stones and (inexplicably) One Direction, and ‘broken’ the States.  It’s an odd feeling; with the time-warping properties of bicycle travel, it seems like I’ve been in the US for ever and for five minutes at the same time.  And it hasn’t really sunk in yet that I’m apparently capable of riding a bike across a continent.  Odd…

The day before yesterday, I was still in the desert.  Another blistering drag across a sandy and featureless landscape, with just the coastal mountains getting closer on the horizon to reassure me that I was making progress.  Still close to a hundred in the shade, if there had been any shade.  Thankfully, I had the sense to make it a shortish day after the 90-miler previously, so I didn’t have too many hours of the ‘sunscreen in eyes’ thing to put up with.  I’d have struggled to make it any further in any case, as the long desert run had really taken it out of me, and I was feeling fairly rough. 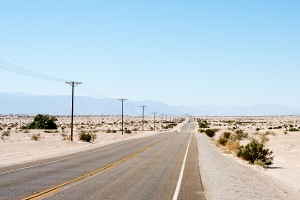 By yesterday, I was feeling much better, but those mountains had become a reality.  There are 30-mile rides and there are 30-mile rides.  This one was 30 miles of uphill.  With over 1100 metres, or 3500ft, of vertical gain, it was also (slightly oddly) the biggest single climb of the trip so far, just because it started near sea-level, rather than from much higher up.  It felt like it too, although at least the temperature dropped to comfortable levels with the increasing elevation.  And that scent of pines, which I’d been fantasising about in the desert, was back for real for the last few miles. 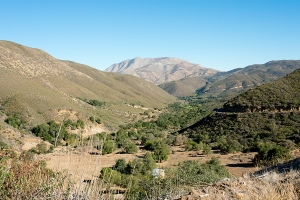 Just before the last major section of climbing, I met Don (“call me Rainbow – everyone else does” – I didn’t even ask…).  He was yet another super-impressive pensioner, who’d just spent five hours thrashing a mountain bike over the same hills I was puffing up.  And who looked as fresh as a daisy.  He was giving out free apples which he’d pinched off someone’s tree further up the hill.  Sixty-four going on fourteen.  It was nice to chat, but I was exhausted in a matter of minutes.

After a rest and junk-fuel lunch at a shop, and recovering slowly from the encounter with Rainbow, I ground on up the hill.  Ten minutes later, I was stopped again, this time after meeting Tim and Laura Moss, a pair of Brits who are on the final leg of their round-the-world ride.  I tried to sound knowledgable and experienced with the cycle touring stuff, but given that they’ve been 14 months on the road, and are just nipping across the US before getting home for Christmas, I didn’t really have much to offer except admiration.

Thankfully, getting to the beautiful little town of Julian at the top of the climb restored my self-worth a wee bit.  I’d nailed the big climb.  My dodgy knee was actually feeling better than it had in the morning, which was good, but peculiar.  And I was only a day away from San Diego. 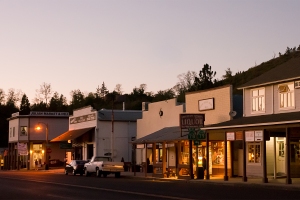 I celebrated (arguably a little prematurely) with a giant spicy burrito.  That’s not some sort of euphemism, by the way.  Just dinner.  I wandered round town for a while, breathing in those pine scents, and marvelling at the change from the arid, super-heated desert just a few miles away.  It’s a completely different world given that it must take less than an hour in a car (even though the roads are small and twisty).  Amazing.

And then today.  Basically just a 60-mile plunge down from the mountains to the sea.  Ignoring a couple of nasty hills which provided a little sting in the tail.  Another completely different climate, with drizzle threatened overnight, and extremely moderate temperatures.  And a couple of entertaining hours on main roads, playing with trucks and buffoons in cars.  I haven’t seen this much traffic since Portugal; such fun!

I was even welcomed into the area by a pair of F15s (I think – they were a little way away), which were circling the big military base at Miramar.  Really nice of them to make the effort to mark my arrival.  Must remember to write them a ‘thank you’ note…

But more important to me than the weather, the military or the traffic was hitting the Pacific at La Jolla Cove at half-past four this afternoon.  I immediately handed my camera to the nearest total stranger to capture the magic moment.  He did OK.  And he gave the camera back. 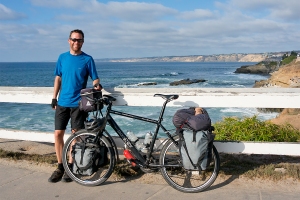 And that was it.  Across a continent on a heavy, heavy bicycle.  Job done.

What next?  A rest in San Diego (probably a week or so), and a tedious period of financial calculations to work out quite how badly I’ve obliterated the budget.  Probably some fairly radical surgery to Plan A to compensate.  Certain places may no longer have the future pleasure of a visit from me to look forward to.  If you see what I mean.

But at least I know I can get around the world on a bike now.  Whether I will or not is down to a vast amount of factors, only some of which I can control. I can’t be worrying about stuff all the time.

So, fingers crossed for the next stage; I’ll tell you exactly what that looks like as soon as I know!