I might have to revise my comment of a few days ago about there being two types of people in Colorado.  I essentially implied that they were all either paranoid retirees or stoner-bikers.  It’s taken a few days, but I’ve worked out that people here are actually just more independent-minded, more thinking, and considerably less heavy (weight-wise) than those I’ve encountered elsewhere in the USA.

I headed out of Del Norte with a tiny headache on Saturday morning.  Mike and Kim at the Organic Peddler had arranged a party for one of their staff who was leaving the night before, and I’d been invited, which was lovely.  As tends to happen (at least to me), this had resulted in Mike, Mark and me sitting around in the late evening, having a long and rambling conversation about everything from sustainable building to US foreign policy.  I also had an invitation for breakfast at Patti and Gary’s (hoping I’ve spelled Patti’s name correctly) cabin by the Rio Grande.  They are both experienced offroad bike tourers, and it was lovely to eat out in the morning sunshine, overlooking the river, and discussing places we’d both been (like Spain and Portugal) and places I’ll be heading to (the Western US and Peru).  I startled a deer on the lane to the cabin, and saw another crossing the river as I left.  It was almost a shame to have to drag myself back onto the road, and head for the Great Divide. 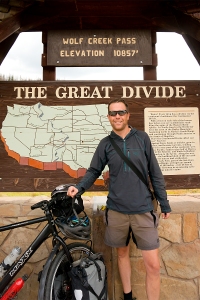 Wolf Creek Pass is the highest pass on my US itinerary.  It was a fairly easy, but long, climb up from the valley, though it steepened up for the last couple of miles, and the combination of thin air and heavy bags meant I was forced to take my time.  Eventually, I pottered up to the top of the pass at 10857ft (3309m).  The pass is also on the Great Divide, meaning that (in theory) rain that falls on one side will drain into the Pacific, while on the other side, it will drain into either the Caribbean or the Atlantic.  Another landmark reached en route to the west coast.

Unfortunately, passing the Great Divide doesn’t mean it’s all downhill from here to California; there are still a few hills in the way.  But the descent off the pass was stunning.  I dropped nearly a thousand metres in half an hour (would have been even quicker if I’d not stopped a couple of times for photos), plunging down a wide, smooth but twisting road to the valley floor.  At an average of over 30mph.  There was a massive smile on my face all the way down; downhills feel even better when they’ve been earned by a big climb.

The other side of the pass (I got to Pagosa Springs that evening, and then on to Durango) is tourist country.  There are people from all over the states, and from many other countries, and prices which have risen to reflect the tourism.  It’s stunning countryside, and the riding is fairly easy, with gentle gradients between the hills (my thighs are disagreeing slightly about that last statement, but still…).

And there’s some hope for those wishing me a close encounter with bears (obviously out of a desire for me to have a great experience, not to be eaten or otherwise molested).  I met a biker last night, Nate, who was heading to Texas.  He’d seen a bear by the side of the road on the way in, and had the video to prove it.  So they are about.  Maybe I’ll catch a glimpse before I hit Utah in a couple of days.  But hopefully not from too close.