Not for the first time on this trip, despite flat terrain, I’m struggling to make decent daily mileage.  And putting in a 100-plus kilometre day on Friday left me feeling dreadful when I tried the same again the next morning.  After a day off yesterday, I’m hoping that I’ve recharged enough to push on north at a reasonable pace.  But it’s fair to say that I’m not exactly flying up the west coast.

It’s the heat.  And the fairly constant headwinds.  I guess you’ve heard more than enough about my sweat patterns and water consumption (only the location changes; Spain, USA, Australia – all the same old, self-pitying whining).  So I’ll trouble you no more about it. 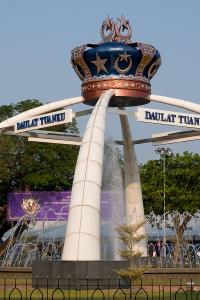 One thing I am enjoying enormously is the Malaysian town names.  I’m not sure if it’s just me (or the heat, dehydration etc), but a lot of them sound quite entertaining.  For example, the fountain / crown arrangement above was in Muar, which is definitely requires ‘har-har-har’ adding to it, to make a rather splendid evil laugh.  And, assuming I get my riding skates back on (so to speak), I should be spending tomorrow (Tuesday) evening in Klang.  Which will, ahem, probably be a little noisy…

OK…  It is just me, isn’t it?  Erm, best get on with what I’ve actually been doing for the last few days… 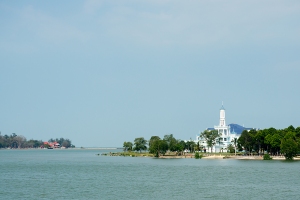 Well, I hit the coast more-or-less as planned.  Though as with the coast roads in Indonesia, it’s not that often that you get a decent view.  The terrain here is pretty flat, and tends to be covered in trees, which doesn’t make for many great sweeping vistas.

But the roads remain well-surfaced, the drivers remain generally pretty decent, and the locals remain friendly and laid back.  Which made for relatively trouble-free progress to Melaka (used to be called Malacca in the olden days), with the exception of the weather, of which enough has already been made. 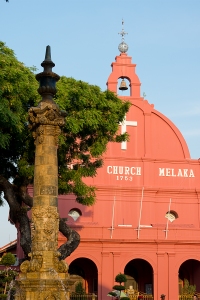 Melaka’s got a lot of interesting history and culture going on.  There were local people there originally, using the harbour, but it was established as a sultanate, trading with the Chinese and others in the area, and was then controlled by the Portuguese and the Dutch for hundreds of years.  And that’s before the British Empire, Japanese occupation, and finally (so far) independence.  Phew.

You can see a lot of these layers from a quick stroll around Melaka: churches, mosques and temples piled in around the old harbour area; old warehouses and traders houses, and a huge (if somewhat over-touristed) Chinatown area.  The town and its history are both pretty representative of Malaysia as a whole, I guess. 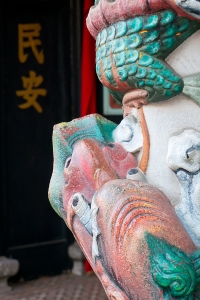 Back on the Beast this morning, I was heading north again towards Port Dickson.  Within a few kilometres, I was in beach holiday country.  There are bundles of enormous hotels and nice houses all the way along the road.  I’m now close enough to Kuala Lumpur that I reckon some of the houses must be weekend places for some of the more affluent denizens of the big city.

You can see why; the seaside’s really nice here: 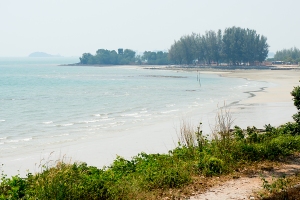 I’m not intending to hit Kuala Lumpur itself of this trip; I spent a day or two there a few years ago, and don’t think that piling through the biggest city in the country on a bike is necessarily worth it.  I might see the Petronas Towers in the distance; they’re pretty tall, but it depends on how the land lies between the seaside and the city.

So I’m just trundling up the coast for the next few days.  And sweating and drinking loads of water.  And going via Klang, which I still think sounds funny, even if nobody else does.