I’m not sure how a post without any cycling involved really fits into an account of a round-the-world bike ride.  But there hasn’t been any riding since I got to Cairns.  Some coral, some fish, an awful lot of flying and another international border.  No riding at all.

But I need to provide a neat finish to Australia; it wouldn’t do to just jump suddenly into the middle of Indonesia as if nothing happened in-between, would it?  So here we go…

I spent so many weeks in Queensland riding parallel with the Great Barrier Reef that it would have been a crime not to go and see it.  I finally got the chance in Cairns (it’s probably more accurate to say that I had my last chance at Cairns; I’ve always been an expert in putting things off ’til the last minute).

And so, on my last whole day on the east coast of Australia (Saturday), I hopped on a ferry and headed for Green Island.

Halfway there (it was the morning, and I’m never all that sharp before lunch), I realised that I’d forgotten to either rent an underwater camera or buy a waterproof disposable one.  This was yet another ‘doh!’ moment to add to the several I’ve accumulated so far during the trip. 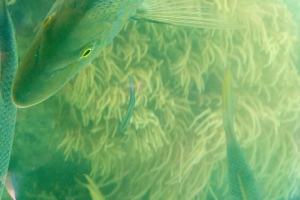 Still, I had a pleasant snorkel around, and then a glass-bottomed boat ride, which at least enabled me to get a couple of blurry snaps of a chunk of reef and a few of its denizens.  I don’t think that they’re likely to set the world of aquatic photography alight, but at least there’s a record…

As I waited on the jetty for the boat back to town, it became apparent that another (yet another?) storm was heading straight toward me, entirely obscuring Cairns behind an impenetrable sheet of rain.

When I got back that evening, I was accused for the first (but by far not the last) time this week of bringing the rain with me.  It hadn’t rained much in Cairns this wet season until my arrival, despite my fairly regular soakings further south in Queensland.  I didn’t think too much of this at the time, until I crossed the country to Perth.

As I said last time, the ridiculousness of aviation routes and fares meant that flying three sides of a fairly large (think most-of-Europe sized) square was cheaper than heading to Indonesia in a straight line.

It also meant that I could visit old friends (Matt, Jennifer and family) in Perth.  I went to school with Matt, but we worked out that it was fairly close to decades (plural) since we’d last seen each other.  Astonishing how time flies (and how old I must be).  And it was also an excuse to stretch my time off the bike by another few days.  Though the Beast’s not particularly happy at having been wrapped in cardboard and battered by baggage handlers across three time zones. 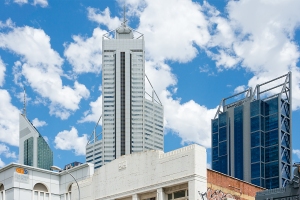 And the worry deepened yesterday (Tuesday), as I raced incoming, menacing dark cloud back to the house.  A casual observer might have thought that the rain thrashing in within five minutes of my arrival meant that wherever I go, precipitation follows.  I might even be starting to agree.  Maybe I am, indeed, destined to be forever stalked by lightning and heavy rain.

If it’s going to catch up with me again, though, it’s going to have to leave Australia and get me in Indonesia.  As I left Perth today, I was departing under crystal-clear blue skies, and remained in them all the way to Bali.

It clouded up later, though.  Of course it did.  Any bets that the first update from the road in Indonesia won’t include the word ‘storm’?  Or ‘rain’?  Or at least ‘shower’?