After the days on The Slab (and I’d been on that road, and its gargantuan identical siblings for far too long), the back roads finally beckoned on Wednesday.

It was a nice change.  Virtually no traffic, an almost total lack of diesel fumes to breathe, and time to stop to admire the view. 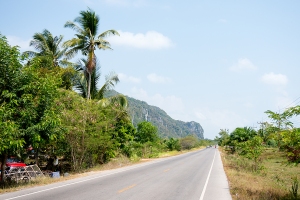 But before that, there was the mystery of the multiplying bikes to work out.

I parked up at the cheapest hotel in Chaiya on Tuesday evening, just before sunset.  The Beast was accommodated in the lobby, tied neatly to the railing on the stairs, and completely alone.

By the time I returned from grabbing some food, there was another bike trying (unsuccessfully, I hope) to mate with The Beast.  And two more (very expensive) adventure touring bikes nestled together on the other side of the room.

It was all very disturbing.  I didn’t see them arrive, and I didn’t see the owners.  It was like The Beast had just spawned a whole family in the time I’d been away.  Terrifying.

I didn’t see them leave, either.  Disembodied voices were all I heard, the next morning, as they all scooted off a few minutes before my alarm meant I was ‘officially’ awake.

Well, I did say I was a little slow in the mornings, didn’t I?

I never did meet the Dutch couple who owned the adventure tourers.  They were heading south.  But, having struggled out of my pit with my usual enthusiasm, I rolled north on the back roads, hours later.  And eventually saw a figure on a bike by the side of the road.  A familiar bike; the one that had been cuddled up to the Beast. 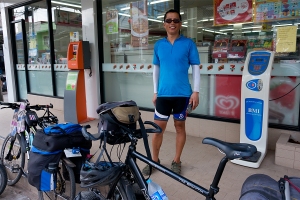 The figure turned out to be Ringo Zheng, from Shanghai, who’s riding north from Malaysia.  He’s a really nice bloke.  Amazingly enough, his name isn’t really Ringo at all.  He picked it out of a list when he discovered his real name was hard to pronounce.  And only then found out that he’d named himself after the least famous Beatle.

Anyway, after a bit of chit-chat and some water melon, we got down to business.  It’s been a while since I’ve had the chance to share the work with someone else, and it’s amazing the difference it makes.  We took turns on the front, and were zipping along between 25 and 27kph (16-17mph) for a good few hours.

Ringo was nice enough to shoot a video of me putting in a turn on the front, which, if you’ve not seen it on FB already, can be found here.  I’m not sure it’s worth it unless you’re really interested in seeing what I look like from behind while riding.  But I couldn’t have shot it myself, so it’s nice for me to have.

We rode together until late afternoon, and then went our separate ways.  Ringo wanted to push on, while I’d made my target for the day.  I don’t think we’re that far apart still, so there’s a fair chance we’ll bump into each other again.  Though I’ll try to keep the bikes apart next time.  Don’t want any ‘accidents’… 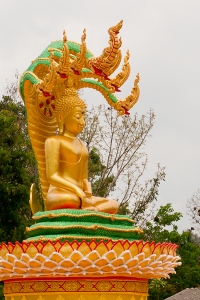 For me, it was back on the Slab on Thursday, making a dull but efficient run to Chumphon, where I had a day off on Friday (and finally got my clothes washed – well overdue).

And then, back to the back roads today.  Hopefully, I can stay on them for the next few days.

Apart from an increase in dog chases, which I haven’t had to worry about for ages, it’s much more pleasant riding.  Being by the coast, you get the chance to have a look at the beaches (mostly empty) and the scenery without having trucks and buses constantly bearing down on you.  And there always seems to be more interesting stuff to see away from the main roads, wherever you are. 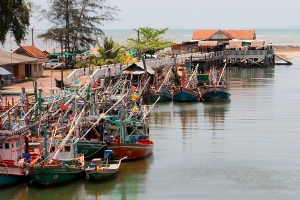 I’m still waiting for the hordes of tourists to emerge.  Everything seems suspiciously quiet so far.  But I’m edging into the resort areas now, so I guess it’s only a matter of time.  I should only be a couple of days to Hua Hin, where I was once part of those hordes myself.

Not sure whether I will be again?  It would be nice to think that being on a bike and going around the world makes you a traveller, rather than a tourist.  It certainly feels different on the small roads and in the little villages.  But in a tourist resort, with a load of other foreigners?