This update’s been a long time coming.

For those who see my Facebook, you’ll know why.  It was because I’ve been afraid since Thursday that, if I started writing, you would just end up getting a rant about the fact that my country has gone completely nuts in my absence.

So, I thought I’d get back to the big mountains, and see if they calmed me down.  And they have.  If only by tiring me out.

I’d made it to Novara, (roughly) between Milan and Turin by the time the Brexit nonsense began on Thursday night.  I’d already decided on a day off there, partly because I was due one, and partly because it was getting very hot on the flat, northern Italian plains.

It was a decent plan, as the temperature flirted with 40 degrees centigrade (104 F) on Friday.  I didn’t feel like doing much anyway, so lounging around and keeping cool was all that was going to happen.

But on Saturday, the weather had freshened up.  The temperature was back to being reasonable to ride in, and the plains remained flat.  Oh, and the wind was at my back for the first time in a while.  I piled on the miles, stopping that night just north of Turin.  And then getting back into the mountains by Sunday evening, rolling up a long valley towards the French Alps. 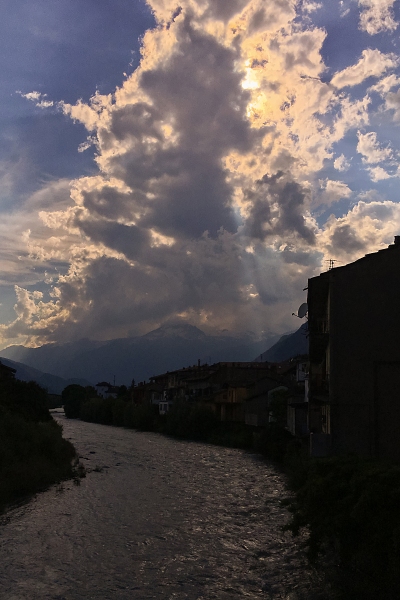 Although I was still extremely grumpy at that point, it was time for the therapy to start.  As seems to be traditional with borders in mountains, my entry to France would take place close to the top of a high pass.  It was time to get the climbing legs out again.

A whole day of climbing got me close to the border by yesterday (Monday) afternoon.  The heat was back, and I was struggling as I hit around 1100 metres (3600 ft) of vertical gain for the day.  Then the road steepened as it set course for the top of the col.  Plenty more climbing to go.  Ouch! 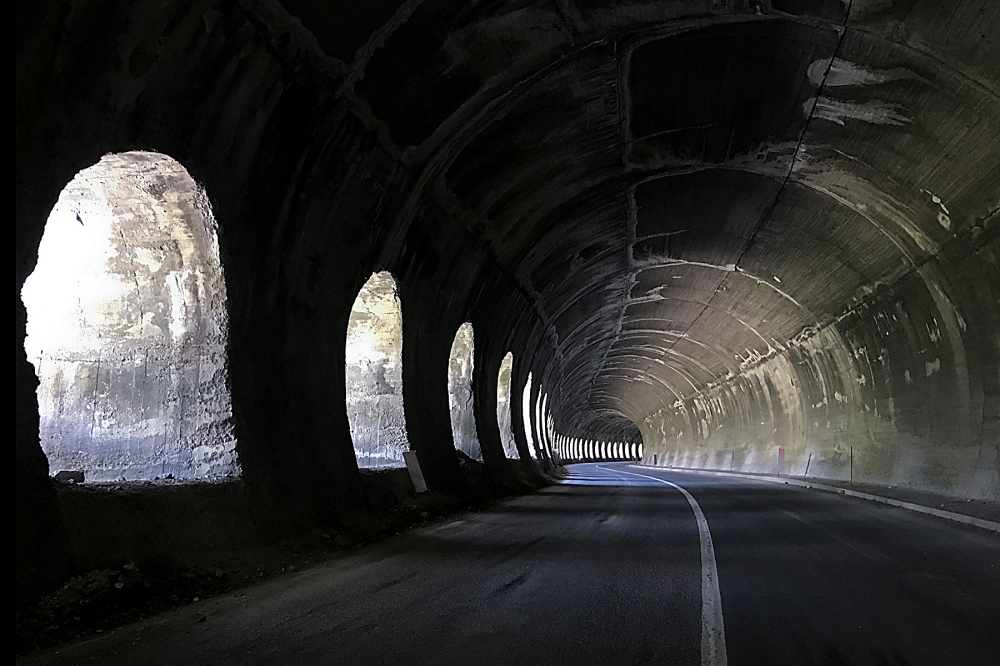 And then, amazingly, a bike tunnel appeared (above).  A couple of kilometres long, it was the old road tunnel.  More importantly, although I was still climbing, it was shady, cool, and with a nice breeze rushing through it.  Just in time to save my climbing bacon.

And so, as refreshed as you can be while still climbing a 6% gradient, I popped out of the tunnel, through a little village, and into France.  Within another mile or two, I finally hit my first col of the French Alps: 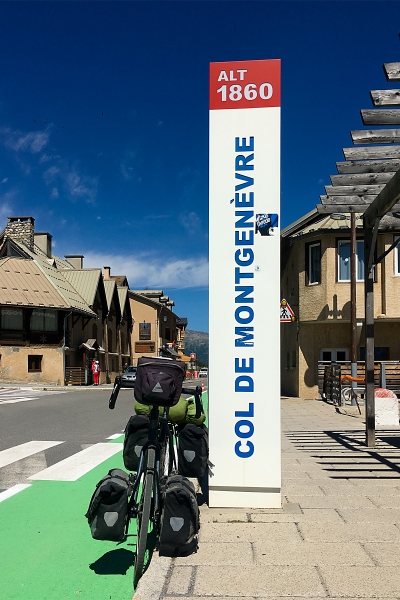 After a very fun plunge off the top (the French downhills have been superb so far, if over much too quickly), I was in Briancon last night.  Watching England’s football team shamefully following the rest of the country out of Europe.  Two results that are hard to understand in less than a week…

Still, I had to do it all again today.  Another huge col, this one the Lauteret, which is a Tour de France regular, and goes up to over 2000 metres (6500 ft).  This time, I was helped out on the climb by already being reasonably high up at Briancon.  And also by getting a bit of company from Ivor, a semi-expat Brit, who was riding up a whole lot quicker than me (though without the bags, in my defence).  Nice to have a cuppa and a chat at the pass, rather than just dropping straight over…

And then, it was another long, long downhill.  So long that I’m going to try to illustrate it with two pictures.  The landscape changed as I dropped from the high peaks at the top (above), to the narrow, but still massive, gorges and valleys (below, on a rare uphill section – spot the big truck).

And I eventually got down off the mountain to the town of Bourg d’Oisans, which is right in the middle of a whole ring of enormous climbs.  Bizarrely, the smallest of these (or at least, it looks the smallest from the town) is the legendary Alpe d’Huez, which zigzags up the side of the valley, and is one of the most iconic Tour de France climbs (often, as in 2015, it’s where the race is decided).  Most of the other climbs around here are much bigger.

But, as a result of having the Alpe just across the road from town, the area is swamped with recreational cyclists.  I rolled into town in the company of a little peloton coming back from an afternoon run up to Huez.  They said it’s not actually a difficult climb.  I’m not so sure that’s likely to be the case on a 40kg touring rig, though…

So I’m still considering whether it will be Alpe d’Huez, or one of the other famous cols near here tomorrow.  What I do know is that the rhythm of climbing all morning, and then dropping down a vertical kilometre of twists and turns in the afternoon, is very soothing.  It’s almost stopped me brooding about Brexit, which is quite an achievement.

Maybe the answer to all the world’s problems can be found in the French Alps, on a bike…