Today was the first day’s riding in the last week that I didn’t have to pull out my passport on the road.  Just since Dubrovnik, I’ve crossed four international borders.  But, because of the peculiar geography in this part of the world, I’ve only been in two countries.

I was slightly inaccurate in the last post, as I suggested that Bosnia and Herzegovina (‘BiH’) was going to be my last Muslim-majority country.  That’s not actually quite true, as the Bosniak (Muslim) population is actually marginally less than 50%.  And my time there only took in the Herzegovina part of the country, where the majority of the population are ethnically Croatian.

But it is the last country that I’ll ride where the Ottoman Empire had a significant influence.  I’ve probably done a few too many lists of historical ‘owners’ of various pieces of Balkan real estate, so I’ll keep this one brief.  BiH had Slavic rulers for a few hundred years, then the Ottomans for a few hundred, then the Austro-Hungarians.  Then the Yugoslavs and the Communists.

It’s no wonder that there are bundles of fortified towns (like the one above) all over the country.  And perhaps it’s also no surprise that BiH was where the spark occurred that started World War 1 (the assassination of Franz Ferdinand).  Or that most of the worst damage and atrocities of the Balkan wars of the 1990s occurred there, too.

The old town of Mostar is a beautiful place, sitting in a bowl between steep hills (hills from which my legs are still recovering).  Its ancient Stari Most (Old Bridge, above) had spanned the river for centuries before the 1990s.  And then, in a microcosm of what was going on all over the country, it was besieged twice in a few years.  First, the Muslims and Croats were fighting the Serbs.  Then they were fighting each other.

Hundreds were killed, and almost a hundred thousand refugees were forced out (pretty much the whole population).  And the Stari Most was destroyed.  Today, the bridge has been rebuilt, and much of the damage cleared up.  But the city still bears the scars over two decades on.  Several burned-out buildings still dot the old town, and bullet / shrapnel holes are still visible all over the place.

Still, apart from its sometimes grim history, BiH is a beautiful country of mountains, valleys, and colossal thunderstorms.  I really enjoyed riding there, and was quite sad to be heading out yesterday (Monday).  Although the blow was softened a little by knowing I was heading back to stunning Croatia.

I had my longest and most thorough questioning at the border.  Not because I was looking especially suspicious (or even especially sweaty).  But the border guard was apparently a bit of a stamp and visa buff, and wanted to chat through pretty much the whole trip, while admiring the various stickers and marks.

I was a little relieved when another vehicle finally appeared behind me, as trying to identify visas on a passport being waved at you through partially-reflective glass is quite exhausting. 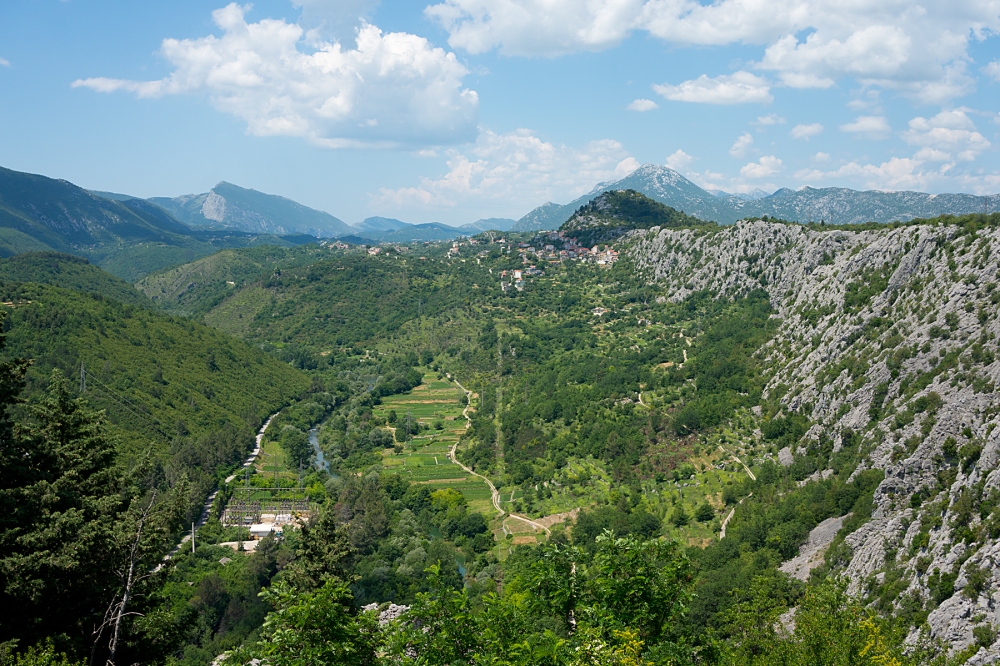 Eventually, though, I was back into Croatia.  And I spent today (Tuesday) heading back to the Adriatic coast.  It wasn’t quite as downhill as I’d expected to start with, but there were some spectacular views to appreciate as I crossed the coastal range (above).

And then there was the drop back to the seaside, which was kind of spectacular:

It’s not often that I’ll stop to take a picture halfway down a hill (apart from anything else, it takes quite a lot of effort to stop a fully loaded touring bike from 40-odd miles an hour), but this one was just fantastic.  Twisting right off the mountains down to the waterside.  It’s hard to get scale properly on photos.  But there’s a tiny boat with a tiny white wake just next to the big headland, which gives an idea of just how big those hills are.

Although it was lovely dropping off the big hills, my legs are feeling the effects of climbing them.  So it’s going to be nice to stick along the coast for a while.  I’ll be heading north, and an awful lot of big mountains will be looming all too soon.