Well, here it is.  The last post from India.  Assuming I get out of the airport OK tomorrow (Tuesday), of course…

Just the one day’s riding; a final 80-odd kilometres last Thursday, bringing me into Amritsar.  Still flat, although with some truly awful traffic in the city centre to keep it interesting right to the end.

And I got here just in time.  There’s been nothing but unseasonal rain and thunder since I arrived.

Well, not quite nothing.  I took advantage of a break in the weather on Sunday morning to go and have a poke around Amritsar’s (and Sikhism’s) crowning glory; the Golden Temple: 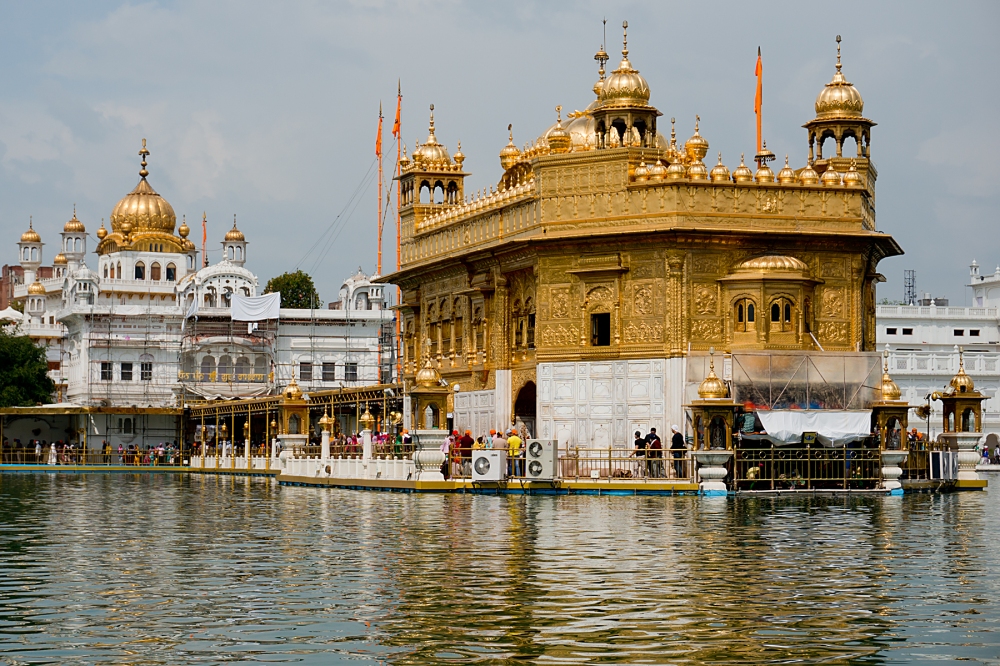 A bit like the Taj Mahal, it’s one of those places that stops you in your tracks as you enter.  Or, at least, it would if you weren’t being propelled bodily through the entrance by a huge surge of Sikhs.  I think Sunday might be the busiest day to go, but it was really the only option, given the weather.

Anyway, once you’re in, and padding around on marble in your bare feet, you can soak up the magnificence of the place.  There’s a huge amount of real gold on the inner sanctum itself, and the combination of reflections in the water, and the square of buildings around it, really make an impression.  And best of all, it’s free! 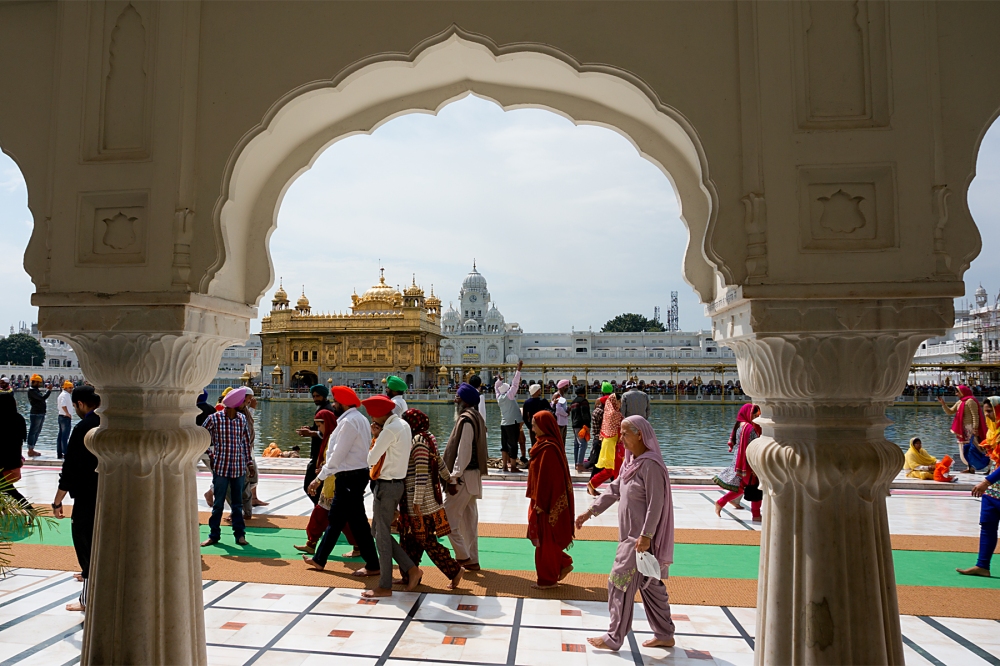 Apart from the Golden Temple (and stuffing my face to put a bit of lard back on before the long miles to come in Central Asia), it’s been mainly sleep and admin in Amritsar.  After all the bureaucratic nonsense involved in getting a SIM card, I should have anticipated that something as apparently simple as buying some US dollars would cause issues.

Thankfully, I first tried to get my dollars back in Delhi about ten days ago.  I’d have been in trouble if I’d waited until Amritsar.  Because, to cut a tedious and very expensive story short, it’s taken me nearly a week to withdraw enough rupees (in small, permitted, instalments) from cash machines, which can then (in small, permitted, instalments) be changed back into dollars at an exchange office.  With all the cashpoint fees and poor exchange rates you can imagine.

If you’ve remembered to keep the receipts from the cash machines, of course.  And if it’s less than a week before you leave the country.  And if you have a plane ticket to show the money changer.  Like it’s any of their business.

I’m not going to miss the bureaucracy of India, that’s for sure.  Although there’s a fair chance that the former Soviet version will at least match it over the next few weeks…

India does have the great advantage of being bicycle country, though.  While the technology is a little dated in general (above), it does mean that finding a bike box for the flight was nice and easy.  The Beastlet is nicely tucked up and ready for flight, although I’ll still no doubt have the usual terrors about rough baggage handlers tomorrow.

As it’s my last day here, I should really have come to a conclusion about whether I’ve actually enjoyed touring northern India on a bkie or not.  I’m not entirely sure I have, but let’s see…

It certainly fair to say that the riding has been dustier, bumpier, and less interesting than many other places I’ve been so far.  The difficulties doing things that are simple elsewhere, simply because someone made a clunky rule about ‘security’ or whatever, are an absolute pain.

On the other hand…  The food’s great.  The people have been really nice, in general.  And places like the Taj Mahal and Golden Temple really do blow you away.  It’s just the length of the bits in-between.

The real decider is probably the driving.  I’ve moaned about it enough in past posts, but the standards here are just appalling.  I found out yesterday that the Punjabi traffic police offer salutes to careful drivers:

I’m pretty sure that most of them will be well out of saluting practice.  Because the answer to ‘Do You Deserve It?’ is a resounding ‘No!’.  I only gave out three ‘thumbs up’ for good driving across the whole country.

So while it’s easy to make long distances here, I can’t pretend it’s been ideal touring cycling.  And sadly, the situation’s likely to get worse as more and more Indians get cars and motorbikes.  Unless all the millions of drivers over here get trained properly, I don’t think I’d want to ride (or drive) here at all in a few years’ time.

And getting so accustomed to near-disaster that your adrenaline no longer spikes when a truck comes charging towards you on the wrong side of the road?  That just can’t be healthy…

Well, there we are.  India very nearly finished, and the Silk Road of Central Asia about to begin.  What the roads, drivers, weather and bureaucracy of Uzbekistan have in store, I don’t yet know.  But it should be interesting finding out.

Apologies for the terrible pun in the title.  I can only justify it by pointing out that it’s much cleaner than anything I could come up with relating to the town of Karnal, where I stopped a few days ago.

Once upon a time (about a month ago, I think), I was riding across eastern India.  Complaining incessantly about the flat, tedious roads, and the dust.

Then, heading north from Agra, through Delhi, and towards my final Indian destination of Amritsar, I was pondering why I seemed to have come to terms with it all, and was quite enjoying myself. 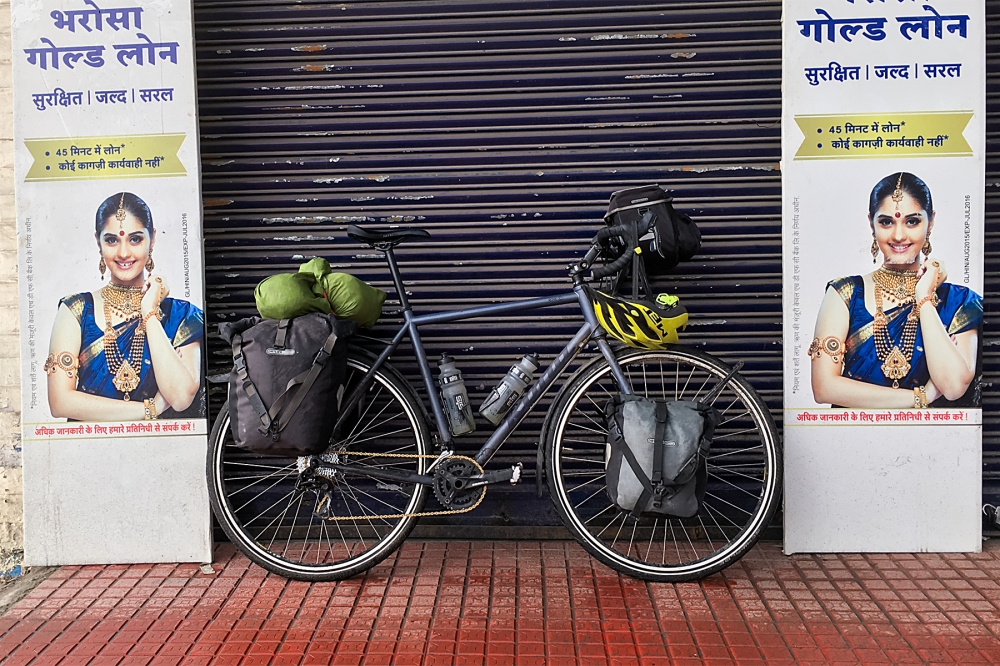 It shouldn’t have rained.  It’s the wrong season, and things are normally pretty settled up in this part of India.  But it did rain.  On Sunday.  Quite a lot.  The bike hid for a while, trying to protect its lovely golden chain (above).

I managed to stay relatively dry by following the back edge of a slow moving thunderstorm.  But I couldn’t avoid the water it had dropped on the highway.

You might recall the picture I posted of my face covered in dust a few weeks ago.  That was a horrid day.  But, arguably, the rain makes it worse.  All the pollution is knocked out of the air, and mixes with the dust, diesel particles, rubber and cow droppings that are already sitting on the road.

The result of this is spraying, liquid filth.  I’ll spare you the face picture this time, and demonstrate the effects that just 30-odd kilometres of this foul mixture had on my leg:

As you can imagine, the golden chain is no longer quite as spangly as it once was, either.

I washed myself, cleaned the bike as best I could, and stumbled on up the road towards Punjab.

With all the media fuss a couple of weeks ago about caste-based unrest, blocked highways, and threats to Delhi’s water supply, it was slightly surprising that there was no trace of any damage or roadblocks throughout northern Haryana province.

It does, however, seem to be the province most likely to offer wandering travellers a nice cup of tea.  Which makes me wonder how the trouble could have kicked off in the first place.  Maybe someone forgot the biscuits…

After Haryana, I only had one province left to cover in India.  Punjab is famed as the centre of Sikh culture, and even before the border (which I crossed yesterday – Tuesday), there’s a significant increase in colourful turbans and exuberant facial hair.

Although the road remains pretty similar, there’s a noticeable difference in culture up here.  It feels quite different from the rest of India.  Sikhs don’t use the caste system, which appears to be reflected in a more egalitarian feel overall.  There are a lot more women who obviously have jobs, and who ride their own motorbikes, for example.  And the cycling experience is a bit different too; a lot more passing big grins, ‘good lucks’ and thumbs up happen here, compared to the rest of the country.

Although several of the biggest grins came from a bunch of guys on motorbikes who were waving spears and swords around.  Heading for a wedding, apparently.  Unclear what they were intending to do there…

I’ve also had three people pass me free drinks (twice out of moving cars, which is a little nerve-wracking).  And that’s never something to complain about.  It’s almost made me forget that nasty rain…

Possibly the only significant criticism of Punjab so far is the taste in interior decorating.  I’m not entirely clear whether the guest house I’m staying in tonight is intended as a shining example of boutique hotel sophistication.

But I thing the green and blue LED detailing is interesting.  As is the wallpaper on the ceiling.

Tomorrow (Thursday), I should hit the end of my road in India, at the Sikh holy city of Amritsar, just 80 km (50 miles) down the road.  I’ll have a few days before my flight to Uzbekistan to deal with more travel bureaucracy.  I need to work out how to buy US Dollars (much harder than you’d think, this being India), and grab a bike box from somewhere.

And I should have the chance to see more of Punjabi Sikh culture.  As long as they stop waving swords at me, I’m quite looking forward to my last few days on the subcontinent…