Mankind has evolved away from using letters.  People make do by scrawling impossibly long lines of runes on incredibly detailed signposts.  Nobody can drive very fast, as they need so much time to decipher the signs.  Oh, and there’s very little cheese in the shops.  Although there’s plenty of everything else, including sweet – very, oddly sweet – shredded chicken buns.

Or maybe I just crossed the border into Thailand.

I did check, you know.  They said it was an hour behind Malaysia.  Nobody said anything about Thailand being five-hundred-and-odd-years ahead.  Less the hour, of course.

But it really is 2558 here.  I know, because the date is one of the very few things you can understand after putting the Thai language through Google Translate.

A quick example.  I’ll give you all the help I can.  This is part of the first (almost infinitely long) text message I received from the mobile phone company (True Move) after putting my shiny new Thai SIM card in.  I assume it’s a welcome message of some sort, but it might as well be in Martian:

‘Heard good Shepherd get to True Move H.  K or the 3G a fire 1 to have actually cover cover all over the United States number means of you is [phone number], use of work has to day at 18/04/2558′.  It goes on for a while longer, then the truly enlightening: ‘the First 99 Star Link to Bora Nasser the call Bt 20 use has long 60 day pin scrap!!’

While it’s good to know that we’ve managed to develop a Star Link to Bora Nasser by 2558, the rest of this makes very little sense to me.  Even allowing for Google’s less-than-legendary grasp of language, it should be easier to understand than this, shouldn’t it? 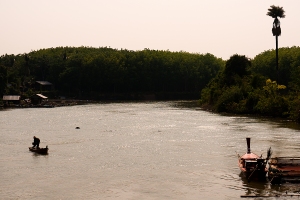 Anyway, despite the language issues and the future shock, the first couple of days in Thailand have been promising.

The biggest difference on the road is that there are hills on the Thai side of the border.  Not especially big ones, and with space between for the road to snake through with minimal climbing, but hills, nonetheless.

And the biggest cultural difference is that I’ve moved from a majority-Muslim democracy to a majority-Buddhist constitutional monarchy under military control.  They take their royals very, very seriously here.  I think there must be some sort of significant event or anniversary on at the moment, as the place is festooned with flags and portraits.  I’ll probably work out what the fuss is all about while I’m here.  I’ll let you know if I do.

Well, there’s your first bulletin from the future.  I’m off to check on the next few hundred years of football results, so I can get some bets on, if and when I make it back to 2015.