I stopped for three nights in Brisbane over Christmas.  I arrived on Christmas Eve, in scorching sunshine.  It was hot then, and should have been hot and sunny all week.  I’m not going to make too much of the heat, as the internet says the UK is doing its usual ‘couple of inches of snow destroys country’ winter routine.  There may not be much empathy out there… 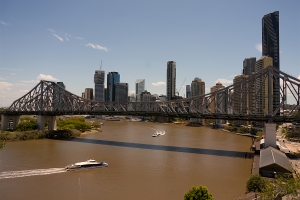 I was due to leave Brisbane on the 27th, but the weather decided differently.  Forty eight hours of continuous rain later, I finally set out this morning.  It’s warm rain here (I’ll hopefully hit the tropics in a relatively few days), but it seems to be just as effective at keeping me indoors as the colder, New Zealand version.  I really need to grow a pair at some point.

So my rest stretched to five nights.  A nice opportunity to sit by the pool, reading and watching the rain fall.  I video-chatted with my Mum, brother, sister-in-law and nephew on Christmas Day, which was lovely (and about as Christmassy as the whole thing got).  I read two books from cover-to-cover, despite following my usual ‘best value’ rules (picking the two that were fattest and had the smallest print).  And I made friends with Brian, the pigeon who lived next door to my room.  Probably still lives there, come to think of it.

Now…  How do you deal with an inconsistently racist granny?

It’s one of those awkward social situations.  Made a bit easier today by the fact that Beryl (the ‘IRG’ in question) is not my granny.  And that she loved her rescue dog.  I’m also making slight allowances for the fact that she was probably pushing 80.

But still…  It started so well.  I stopped for a drink to relieve the sweltering humidity.  Beryl heard my accent, and turned out to come from Greenwich, where I began (and intend to finish) my little journey.  Surely, a nice little chat awaited?  Beryl, however, was quick to advise me that she will never again spend time in London because “all the white people have gone”, and the country’s essentially being destroyed by (presumably non-white) immigrants.  She seemed set to go on in this vein for quite some time.

As I searched desperately behind my sunglasses for a sensible response, a man with a dog walked past.  Beryl immediately switched to talking about her dog, which she clearly loves to bits.  In the course of a lengthy monologue on the adored pet’s virtues, it became clear that one of her favourite things about her dog is that it has black skin (not a black coat, mind you – black skin).  Erm…

Anyway, I shrugged off thoughts of how painful Beryl’s irony bypass surgery must have been, and made my way out of Brisbane’s suburbs and up into the countryside.  Tonight’s stop is Nambour, which is a pleasant but unremarkable town, distinguished this evening by displaying the shortest portion of a rainbow that I’ve seen from a while.

Though the end of the partial rainbow is roughly where I’m staying this evening; I may spend the night digging holes to find the pot of gold.  Or sleeping may be the better option.  There are a few more miles to make before another stop to welcome 2015, after all.

Oh, and for those of you who asked, the Beast got two new inner tubes for Christmas.  There’s a tyre in the pipeline shortly, too.  I’m not that cheap 😉