There are eight of us now.  Eight sad, trapped cyclists.

The middle-aged Dutch couple with the super-expensive adventure touring bikes.  The American lads with their soaked gear.  The Anglo-Malawi couple with their matching hire bikes, not yet ridden out of town.  The Aussie with the hybrid and the backpack.  And me.  The place looks like a cyclists’ refugee camp.

It’s well over thirty hours now since the rain began in earnest, driving in hard from the sea.  It’s ebbed and flowed ever since.  And it’s still raining.  Sometimes a heavy drizzle, blowing damp into every crevice.  Sometimes a full-on monsoon downpour, hammering on the roof and even seeping through the hostel’s old windows.

For some of us (like me) it’s wiped out two days’ riding.  For others, it’s meant near-drowning before finding shelter here.  For all of us, it means we’re stuck in Greymouth for now.

Only the cunning old Frenchman escaped, sneaking out to the station at lunchtime to catch a train to better weather (he hopes) over the mountains to the east.  There are malicious rumours circulating that Christchurch is currently basking in 29C sunshine, but nobody wants to think about that.

No, the rest of us are doomed.  Doomed to gazing wistfully out of the window, sipping hot drinks and imagining slight brightenings in the gloomy sky.  Or to wandering aimlessly about town.  Or watching the washing spinning in the laundry.  Or reading flyers about what we could be doing if the sun was out.

The name of the hostel, in which we’re incarcerated, by the way? 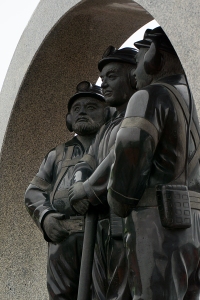 At least we’re not miners.  This area was built on mining, and the memorial on the sea-wall in town is a grim reminder of how many died in this area to bring coal and gold out of the ground.  We’re not dying here; just bored and frustrated.  And things should be better tomorrow (Sunday), with sunshine and showers promised.

I got this far from Westport in a day, which is better than nothing.  I ignored another woeful weather forecast on Thursday, and lumbered 100km down the beautiful coast highway.  I thought I’d only make it about 50km before the rain began, but the rain was late.  For once.  The road is still a bit lumpy, but it’s allowed to be; it’s a really lovely highway, with some impressive bays and areas of rainforest.  And I got to Greymouth dry, which in current circumstances is quite an achievement.  I even saw a couple of flashes of blue sky, as I remember.

I met Andy on the way down from Westport.  Another English round-the-worlder (well, a Geordie, at least), heading in the opposite direction.  He’s well on his way home, in terms of miles, and we shared a little wisdom about our respective next destinations.  He’s another tourer with more than two years on the road, giving me perspective on the distance still to go, as well as some very helpful tips on carrying enough water in the outback.  That’s one thing I don’t think I’ll need to worry about in NZ…

Assuming the rain doesn’t continue for the full forty days and nights (if it does, we’ll have to hope that Noah’s Ark actually floats), there should be a spectacular bomb-burst of brightly-coloured bikers out of town tomorrow.  All pushing the pedals with a little extra determination to make up for the frustrations of the last couple of days.  It should be quite a sight.