I didn’t intend to head for Los Angeles when I made my half-baked ‘plans’ for this trip.  I didn’t really intend ever to head for LA.  I’m not a celeb-spotter, a wannabe-actor or a psychotic stalker (as far as I know).  And I’m deeply suspicious of anywhere where you can actually see the air you’re breathing (and you can, believe me).

But then my planning wasn’t especially extensive, and I initially intended to fly to New Zealand from Chile.  There are no direct flights from San Diego, so Los Angeles it had to be.  I had to leave the friendly embrace of ‘America’s finest city’ (the locals’ own description, naturally), and head up the coast.  A gentle 120 miles or so in three days, with only the last thirty-ish miles through the sprawling suburbs of southern LA.

I was familiar with the northern Californian coast from a road trip a few years back.  I really liked the meandering coastal highway, with the redwood trees, cliffs, beaches and sleepy little towns.  Southern California is a bit different.

After a first day cruising gently out of San Diego, through its northern suburbs and the seaside towns up the coast, things got a little more exciting on day two.  You need to cross the giant US military base at Camp Pendleton, which appears to be a little schizophrenic about cycling.  For the northern half of the base area (the second section for me), there’s a nice tarmac cycle track along the coast, merging into a state beach area.  This is genuinely nice.

Unfortunately, the southern half of the base essentially cuts off every road apart from the Interstate, leading to a hairy 12-or-so miles along the glass-strewn hard shoulder, with the traffic doing a minimum of 70 mph next door.  This is nice only in a particularly sarcastic way.

On the plus side, you get to see the US Marines playing with their toys.  I’m not sure whether innocently taking long-lens pictures of military aircraft doing circuits and bumps on the beach gets foreigners into trouble in these paranoid days.  Especially while standing on US military property.  So I found the picture below, which gives a decent impression of what was going on around me (including the huge sand clouds) as I trundled through the base area.

Having traversed Pendleton, and cleared the sand from your eyes, lungs and crevices, there are a few more miles of seaside towns full of wealthy and semi-wealthy people before you hit the LA suburbs proper (I reckon LA starts a few miles before Long Beach).  I’ve seen more ‘all-too-well-known Seattle-based coffee shops’ in the last three days than in the whole of the rest of the way across the US.  This, I’m assured, is a sign of wealth.

A few more idyllic miles of beach-side cycle path followed, albeit with the dark smudge of LA’s halo of smog darkening the horizon.  This is the bike path along Huntingdon Beach, which is really very pleasant: 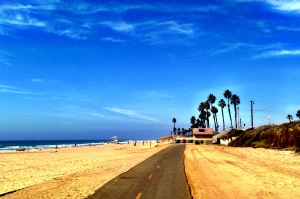 And then an adrenaline-spiked, two-hour rush through southern LA.  I’m not entirely sure what happens to me when you put me on a bike in traffic, but it must be a relic of commuting in London.  Self-preservation requires hyper-awareness, eyes-in-the-back-of-my-head, and fairly (arguably very) aggressive riding between hundreds and hundreds of traffic lights.  The alternative is getting messily squashed.  It’s actually quite fun, in an extreme sport sort of way.  And it’s an absorbing enough game that you don’t notice how tiring it is.

Anyway, I arrived near LAX airport yesterday afternoon (Wednesday), leaving plenty of time to prep the bike for a long, long flight on Saturday evening.  Needless to say, I found a bike box within an hour or so this morning, so have an extra day to kill tomorrow. Not sure that I can find enough to keep me busy out here near the airport.

So maybe I will, despite my best intentions, end up in the centre of Los Angeles.  How unexpected.