There are different ways of ‘doing’ Route 66.

You can do it end to end, all the way from Chicago to LA.  You can dip in and out, zipping along the interstate between the interesting sections of the old road.  You can do it in a convertible car, or with a pack of like-minded Germans on Harleys or Scandinavians in camper vans.  Or you can do it on a bicycle, which is obviously the best approach.

In the same way, there are different ways of making money from the tourist traffic. In my mind, at least, there are right and wrong ways to do this.

My first impressions were that it was a nice enough road, generally dropping (always good) out of the hills, but spoiled by over-exploitation.  The ‘charms’ of Seligman, which is touted as a quintissential Route 66 town, were entirely hidden by rows of tourist buses.  People from all over  the world waving a thousand cameras kind of spoiled it for me.  As did the double-priced coffee and breakfast surrounded by moaning French pensioners (coffee not good enough, apparently) and squeaking Chinese teens (just generally over-excited).  It was all a bit cheesy and depressing. 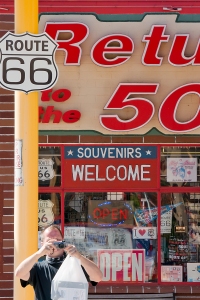 Riding away from tourist hell was something of a relief.  I had what turned out to be an over-optimistic plan to ride an 80-odd mile section of the old road to Kingman.  The fact that I didn’t manage to get on the road until half-past ten was not a good sign (getting up early has never been a strength of mine).  The heat that was kicking back in as my elevation decreased didn’t help.  It was quickly apparent that I wouldn’t make Kingman in a day.

I had developed a cunning back-up plan for just such a contingency, involving a motel I’d spotted online, so I was quite happy arriving there in mid-afternoon.  Until the toilets and other porcelain artifacts sitting outside the rooms made it fairly clear that the Frontier Motel was not currently open (apart from the gift shop).  And there was a grand total of zero alternative accommodation between there and Kingman.

Thankfully, it was time for another rescue from generous Americans.  Allen and Stacy bought the Frontier six months ago, and are gradually bringing the motel, cafe and shop back to its former glory.  Most importantly for me, they were happy to let a sweaty, smelly cyclist sleep on the floor of the not-yet reopened cafe.

They are a lovely family, who moved out (kids, dogs and all) with the aim of bringing a Route 66 landmark back to life.  There’s no intention to turn the place into another Seligman; they’re just really nice people working hard to re-build a small business in the middle of nowhere.  The contrast with Seligman’s disneyfied approach couldn’t be starker.  I wish them every success with it.

I’m parked up in Lake Havasu City today (Tuesday).  Amazing that I can already see my last US state, California, across the lake.  The city is famous for only one thing: it’s the home of London Bridge.  I’ll be out later today to look at it properly, but this was my first view (sadly with a deeply attractive car park as foreground):

There’s no doubt that it’s a bit weird to find a chunk of London in the Arizona desert, especially when I’ve crossed the replacement London Bridge so many times.  There’s a standard ‘stupid Americans’ story in the UK, which says that the intention was to buy the iconic Tower Bridge, and that they got this one by accident.  But dismantling and rebuilding the bridge stone-by-stone, with the intention of building an entire resort around it, is not the sort of accident that really happens.  Definitely still weird, though.

And ‘Bizarre History Week’ was topped off yesterday morning in Kingman.  I was finishing my coffee outside a well-known fast-food ‘restaurant’ when I was approached by what appeared to be a middle-aged homeless man.

I’m glad that I didn’t blank him, though, as he turned out to work for Howard Hughes’ son, who’s the rightful ‘world emperor’.  My informant had been battling a covert conspiracy by the royal families of Europe to take over the world for some time.  I only had time for one story, but it turned out that, at the age of four, he’d been sent to London to assassinate the King.  He’d succeeded, and escaped with his mother on a Constellation airliner.  The Queen was a bit miffed, and sent fighters to shoot the plane down (“it was like Swiss cheese”), which killed the pilots.  Thankfully, my friend had already been taught to fly by his Dad, and was talked down to a crash-landing in Paris.  The plane was so shot up that the tail fell off on landing, and he was presented with a pilot’s licence by the super-impressed Parisian air-traffic controllers.  A cynic may find this all a bit unlikely.  I’m just not sure where they found enough cushions for a four-year-old to see out of the plane’s cockpit.

In any case, I had hitherto been entirely ignorant of this important historic episode, and will be searching the internet carefully to find out more about it.

Plenty to ponder then, as I head into the last few days of crossing the continent.  I’ve got a tricky bit of hot desert to get across before the more temperate coastal zone, and there’s yet another hurricane dying off Baja California, which is pushing some rain and storms my way.  Should still be less than a week to the seaside, though.

Assuming the Queen doesn’t have me hunted down before I get there, that is…